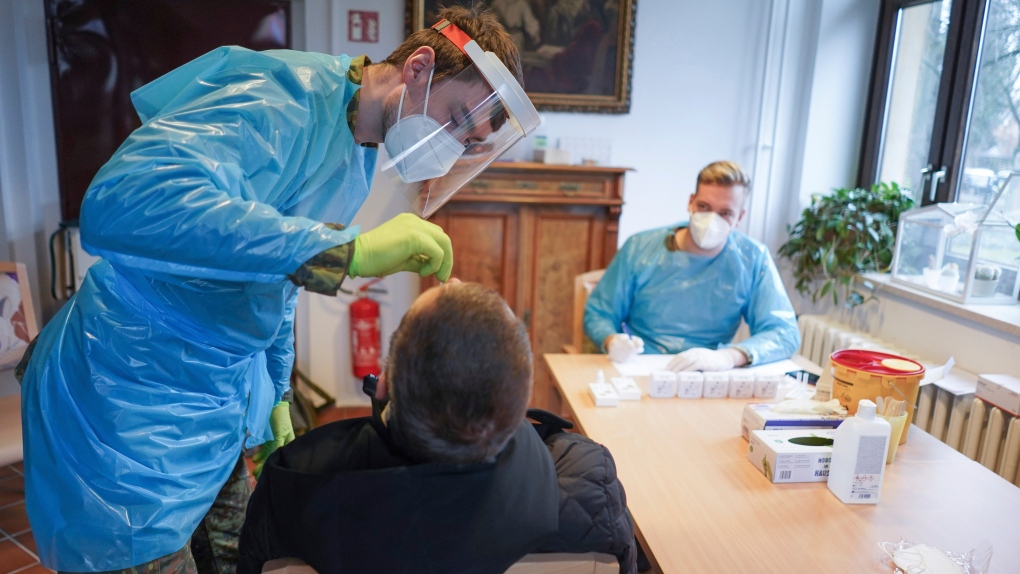 Sergeant Klaas-Clemens Hauschild, left, and Corporal Eric Berthold from Bundeswehr Operations Command 3 conduct a Corona test at Diakoniewerk Niederschoenhausen, Berlin, Germany, Feb.26, 2021. Since mid-January 2021, soldiers have been testing employees and visitors there for Corona, keeping the lists for signing in and out and informing them about the current hygiene regulations. (Joeg Carstensen/dpa via AP)

BERLIN -- Germany announced Sunday that travellers from France's northeastern Moselle region will face additional restrictions due to the high rate of variant coronavirus cases there.

Germany's disease control agency, the Robert Koch Institute, said it would add Moselle to the list of "variant of concern" areas that already includes countries such as the Czech Republic, Portugal and the United Kingdom.

Travellers from those areas must produce a recent negative coronavirus test before entering Germany.

The Moselle region in northeastern France includes the city of Metz and borders the German states of Saarland and Rhineland-Palatinate.

Clement Beaune, the French minister for European affairs, said France regrets the decision and is in negotiations with Germany to try to lighten the measures for 16,000 inhabitants of Moselle who work across the border. Specifically, he said France does not want them to face the daily PCR virus tests that Germany has applied elsewhere to travellers along some borders.

He said France is pushing for the use of easier, faster testing methods and for tests every 2-3 days rather than daily. More talks were expected later Sunday, he said.

The Robert Koch Institute recorded 7,890 newly confirmed cases of COVID-19 in Germany over the past day, taking the total to over 2.4 million cases.

More than 300,000 COVID-19 cases logged in Ontario since beginning of pandemic

Vaccine tourism is both unethical and bad for business, experts say