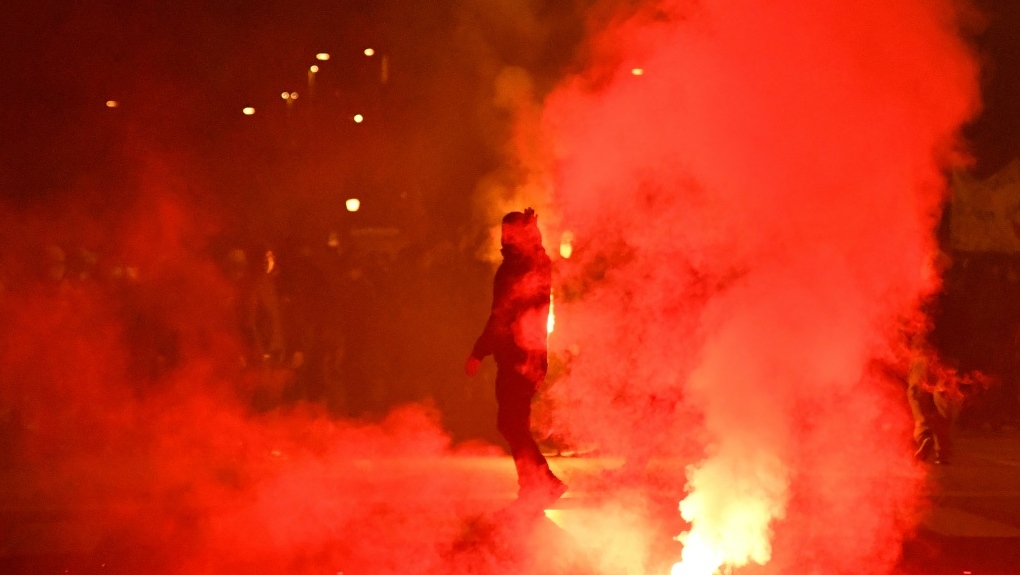 A left-wing activist walks past flares as they take part in a protest rally to demand economic support measures, as the government announced a new series of restrictions to contain the spread of COVID-19 and considers more stringent measures, in Rome. (AFP)

ROME -- New skirmishes between police and protesters broke out in Rome on Saturday following clashes in Florence a night earlier that Italy's interior minister blamed on "violent fringe elements".

Protesters have taken to the streets in the past week in cities across Italy, including Rome, Naples and Turin, to criticise a new series of restrictions to aimed at stopping an alarming rise in coronavirus cases, even as the government considers more stringent measures to be announced as early as Monday.

Early Saturday evening in Rome, a sit-in at the famed Campo dei Fiori ended in a clash with police as some in a crowd of a few hundred protesters began throwing bottles and firecrackers, before being dispersed by police with riot gear and truncheons.

A second protest in Rome also ended in clashes with authorities.

The protests in Italy's capital came a day after an unauthorised nighttime demonstration in the Renaissance city of Florence turned violent, when police sought to prohibit about 200 people from entering in the central Piazza della Signoria.

Clashes broke out between riot police and protesters, some of whom hurled Molotov cocktails, bottles and rocks, overturning trash bins and breaking security cameras.

Interior Minister Luciana Lamorgese said on Saturday that some of those protesting were seeking to exploit the coronavirus emergency.

"Unfortunately there are violent fringe elements trying to infiltrate the plazas in order to exploit the social and economic discomfort of this difficult moment," Lamorgese told Il Foglio newspaper.

In Bologna some 80 kilometres (50 miles) away, a few hundred people also protested late Friday, most of them giving the fascist salute, La Repubblica daily reported.

The protests come as Italy reported 31,758 new cases of the virus on Saturday, a new daily record.

Italy's government is eyeing a lockdown of the country's major cities, beginning with Milan and Naples, news media reported, to try to slow the alarming rise in infections.

The new measures, that could be announced by Prime Minister Giuseppe Conte on Monday, are likely to involve prohibiting travel between regions and limiting business activity in metropolitan "red zones".

"We are meeting with experts and considering whether to intervene again," Conte told Il Foglio.

The first European country to be hit hard by the pandemic in March, Italy underwent a more than two-month quarantine that devastated its already struggling economy.

On Sunday, Italy introduced new nationwide coronavirus restrictions, including the closure of all cinemas, theatres, gyms and swimming pools and the closing of restaurants and bars at 6:00 pm (1700 GMT).

Conte had earlier hoped to wait for two weeks after the imposition of the latest measures to gauge their effectiveness before calling for more stringent measures, but the speed with which the virus is spreading may force his hand earlier.

The government has announced that five billion euros ($5.9 billion dollars) will be issued to the worst hit professions, including restaurants, taxi drivers and live entertainment venues.

The new restrictions spurred a wave of demonstrations in Rome, Milan, Naples and Turin on Monday and Tuesday, marked by violence and vandalism, with riot police firing teargas at groups of young people hurling bottles and rocks.

Earlier on Saturday, the president of the southern Campania region signed a new decree to suspend schools until November 14.

N.L. reports one new presumptive case of COVID-19 at Voisey's Bay mine site

'We are at risk': Leadership sounds alarm as COVID-19 cases surge among First Nations