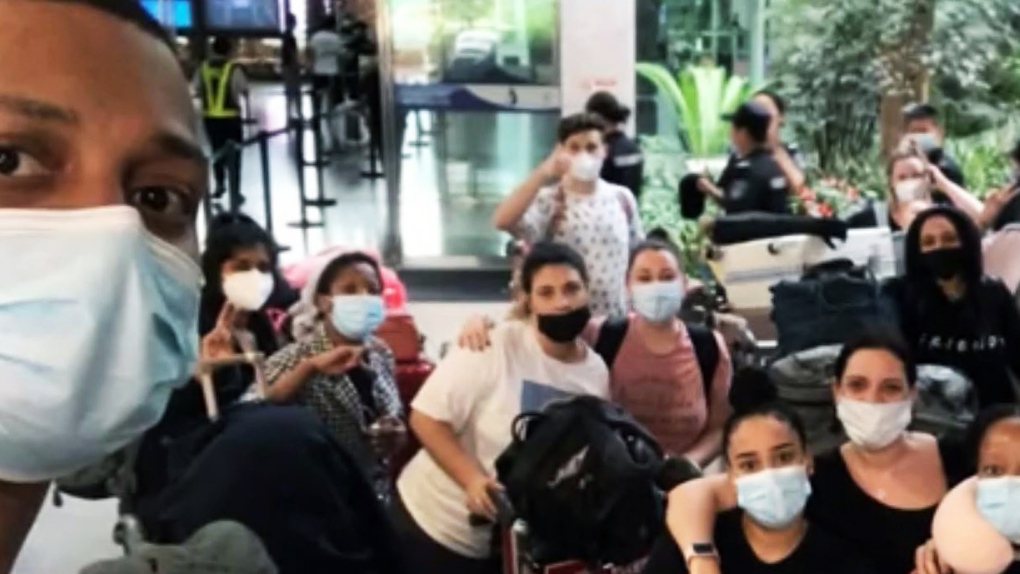 Using only his phone, a man in New Brunswick was able to secure a rescue flight for more than 100 Africans stuck in China amid the pandemic. (Carmen Johannie / CNN)

Even for 2020, with its once-in-a-generation global pandemic and the countless travel bans that have followed, this rescue mission seems a bit far-fetched.

To get around 100 South Africans and a couple of dozen Zimbabwean students out of China, it would take Air Zimbabwe's only functioning aircraft, and diplomatic channels in embassies across the world -- all orchestrated from a dining room table in Canada by one man, armed only with a cellphone.

"It is me. Me alone and my phone. I am new in Canada, so they don't give me much phone credit here," laughed Tertius Myburgh -- a South African commercial pilot who lives in New Brunswick.

But that phone -- and its limited credit -- represented the last hope for so many stranded in China.

"They started contacting me, because I am in aviation, and they said: 'How are we going to get out of here?'" explained Myburgh, who began hearing from people after South Africa banned incoming travel in March.

"Before COVID, you could just contact their civil aviation authority, send the details of your flight and -- boom -- a day or two later you have the authorization and off you go," he added, on the relatively simple charter flight process before the pandemic.

But now Myburgh had to navigate the complexity of chartering flights amid international lockdowns -- and with the added complication of a struggling aviation industry.

As the number of paying passengers who needed repatriation became clear, Myburgh used his Southern African links to lease a Boeing 767, plus its pilots and its crew, from Air Zimbabwe. It was the same 30-year-old plane that had been used by former President Robert Mugabe from time to time. That plane then unlocked the assistance of Zimbabwean diplomats.

Myburgh readily admits he first saw a business opportunity when he responded to the pleas for help, but he says it was impossible not to get swept up by the individuals and their stories.

"It is not just them. it is their fiancé maybe that is in South Africa, it is the husband or the wife. Or the mother and the father."

With so many calls coming in, he needed a partner on the ground to help coordinate and corral the diverse group of South Africans and Zimbabweans.

Early on, he connected with Carmen Johannie -- a South African schoolteacher based in Guangzhou.

Johannie had lived in China for three years, and was working as a teacher at the British school in Guangzhou. But after being forced into mandatory quarantine by Chinese authorities, like all other African passport holders based in Guangzhou, Johannie knew it was time to get home.

She spent months trying to get back to South Africa, before finally linking up with Myburgh.

"He sent out a message, anyone stuck in China needs to contact him. The minute I sent him a message, I instantly knew that he was a man of his word and he was a one-man show and if anybody was going to bring us home, it was going to be him," she said.

"It was a team effort thing we did. And then I realized how many people are relying on us -- the pressure was hectic."

Many South Africans needed to get home from China, in part, because of a cancelled repatriation flight by flag carrier South African Airways (SAA), that had originally been scheduled for mid-June.

SAA and the South Africa government mounted a high-profile evacuation of South Africans from Wuhan in mid-March. The airline has also repatriated citizens from a host of other countries.

But an additional flight, planned for June, was shelved.

"SAA was willing to transport these passengers from China to South Africa. We need to appreciate that it is under abnormal circumstances," Tlali Tlali, the airline's spokesperson told CNN, adding that SAA needed permission from both governments.

"We obtained permission from the South African government, but we are still waiting for approval from the other end."

That left Myburgh, Johannie and the Air Zimbabwe 767 to do what South Africa's national carrier could not. Myburgh credits Zimbabwean diplomats, trying to get their own citizens home too, for smoothing the way with Chinese officials.

The paperwork, though, was just one of the hurdles.

Plotting a route that would make a frequent flyer's eyes water, the plane and crew began their journey from Zimbabwe in mid-July.

They flew from Harare to Johannesburg, and on to Bangkok, before heading to Kuala Lumpur, where they picked up stranded commercial seafarers from China. The sailors' company helped bear the costs of the charter.

From Kuala Lumpur, they headed to Guangzhou, then back to Kuala Lumpur -- since they weren't authorized to take domestic routes in China -- and on to Wuhan, to pick up most of the South Africans, before eventually making it back to Johannesburg.

The Bangkok leg had to be added when the 767's engine broke -- stranding the South Africans for another two weeks. Myburgh had charged US$1,000 for each repatriation; he ended up paying for their hotels and meals.

For the hundred-odd passengers, many who had become like family to each other, it was just the latest in a long series of disappointments. Some had run out of money by then, so they helped to crowdfund support.

"You are waiting for something to go wrong. So when that happened with the engine -- we laughed and there was literally nothing else we could do. Our motto was: 'It is what it is,'" said Johannie.

A new engine for the 767 made its own journey: from Harare, to Amsterdam, to Luxor, to Taipei and then on to Bangkok.

Myburgh said he never contemplated refunding the passengers and pulling the plug.

"How can I go sit now in the garden and have a whisky and have a BBQ because I made it easier for myself, but all these people are stuck there? It can't happen that way -- you have to do whatever is possible," he said.

As the passengers and crew waited for days for the new engine, Myburgh's credit card bills piled up. He says he ended up losing "lots and lots" of money on the repatriation, but believed that if he pulled the seemingly impossible off, future flights could help his business survive in these difficult times.

Then, in mid-July, after months of waiting, and weeks of disappointments, Johannie and the group from China were finally on their way home.

"When we took off from [Kuala Lumpur], I literally broke down. And then at the same time it was like the weight of the world was taken off your shoulders. When we landed, it was so surreal, there many tears," said Johannie.

The South African government told CNN it is compelled to help all citizens abroad, and said it had facilitated the South Africans' flight approvals and organized their quarantine on landing.

That's where Johannie and her fellow passengers are now spending two weeks, in a sprawling complex east of Johannesburg. They still trade WhatsApp messages and wave to each other from their porches during the isolation. But at least they are home.

Johannie says their months-long ordeal is over thanks to just one man. A man she has never met.

"I called him my guardian angel from day one, because that is literally what he was. He is literally the only one who could help us," she said.