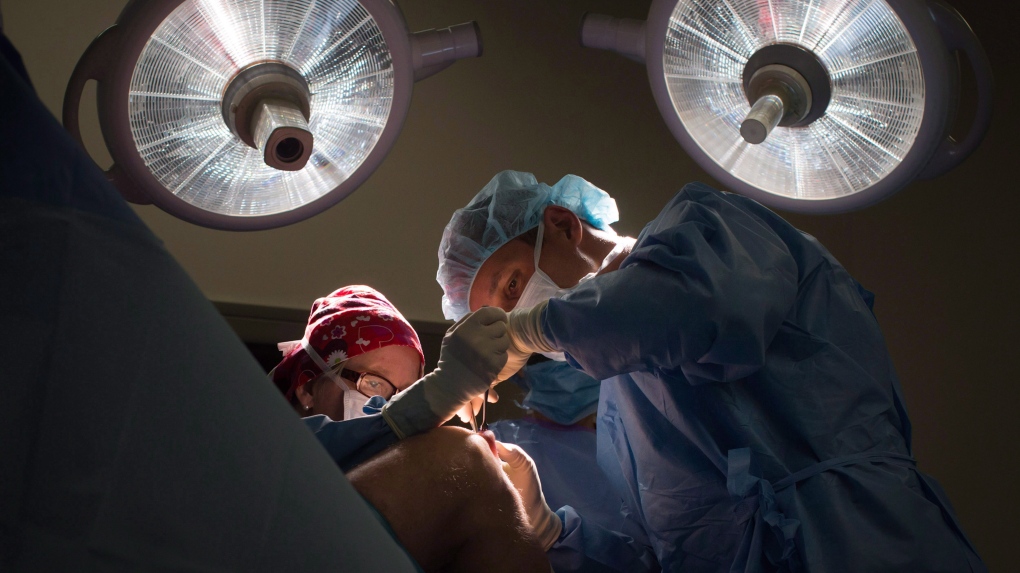 Dr. Anne Wachsmuth, left, assists Dr. Darius Viskontas as they remove a cyst from a male patient's knee, at the Cambie Surgery Centre, in Vancouver on Wednesday, August 31, 2016. (THE CANADIAN PRESS / Darryl Dyck)

VANCOUVER -- A framed iconic photo in Dr. Brian Day's office shows Muhammad Ali raising a triumphant gloved hand as he stares down at his opponent splayed on the mat after a first-round boxing knockout less than two minutes into the fight.

Day, 72, will step into a courtroom on Monday as final arguments begin in the culmination of a battle he launched a decade ago against the British Columbia government based on a constitutional challenge saying patients have a right to pay for private care if the public system leaves them waiting too long.

"I stayed up to listen to the fight on the radio," Day said of the legendary spectacle between Ali and Sonny Liston in 1965, adding he stopped boxing in his native Liverpool, England, at age 11 as his peers began outgrowing him.

He took on the provincial government, and in effect the "myth" of Canada's single-tier universal health-care system, in 2009 and the case landed in B.C. Supreme Court in 2016 with support from four patients.

Other countries, including Switzerland, Germany and England, that offer a parallel public-private system of care have managed to shorten wait lists, he said.

"We're the only jurisdiction on Earth where private health insurance for medically necessary care is unlawful, unless you're an injured worker," Day said after doing knee surgery on a 61-year-old patient from Alberta, the first of his eight procedures that day, some involving people whose costs would be covered by B.C.'s workers' compensation agency.

That's unfair to children and others needing surgery because they must choose to either pay for private clinics or suffer through delays in public hospitals, he said.

"One of the witnesses in our trial was a welder who had previously undergone surgery for a knee ligament injury on one knee and came back a few years later with the same injury in the other knee but he hurt it on one knee and got an MRI and surgery quickly, and on the other side was told it was going to be 18 months," Day said of the difference in access to treatment between work- and sports-related injuries in the same patient.

However, government lawyers say in written closing arguments that Day's claims of the plaintiff patients having been deprived of life, liberty and security of the person under Section 7 of the charter are problematic because those protections apply to issues of justice, not health care.

Rather than a constitutional challenge, the government alleges Day's case amounts to "political theatre" and an attempt to force change on the health-care system for the financial benefit of doctors who earn more money from wealthy patients going to private clinics.

The province also says Day's lawyers have failed to establish that patients any suffer harm by waiting for services.

Day legally opened the Cambie Surgery Centre in 1996, saying he wanted to create more operating-room time for surgeons who couldn't get it in public hospitals and that profit was never a motive. However, the facility has been operating since 2003 in violation of unproclaimed provisions of the provincial Medicine Protection Act.

In 2018, Health Minister Adrian Dix announced the government would begin to fine doctors $10,000 for a first offence and $20,000 for a second violation of the act if they charged patients for publicly available services. He said the 'don't ask, don't tell' approach, which allowed private-clinic surgeries and diagnostic tests to continue because provisions of the law had not been enforced, would come to an end.

However, Day successfully sought an injunction that prompted B.C. Supreme Court Justice Janet Winteringham to order the government not to enforce sections of the act until their validity could be established at trial, which is expected to conclude Dec. 6 with the trial judge.

Days before the start of closing arguments, the surgeon said the injunction order was a positive sign he would prevail in his court battle because Winteringham recognized patients would "suffer serious physical and/or psychological harm while waiting for health services" if they couldn't turn to private clinics.

"It's unconstitutional. You cannot have it both ways. You cannot promise health care, then not deliver it in a timely way, then outlaw the patients' ability to access it independently," he said.

"I'm confident that the evidence is in that major harm is being done to patients by the health system as it operates."

The federal government is an intervener in his trial, along with Canadian Doctors for Medicare, the B.C. Nurses' Union and the B.C. Health Coalition.

Dr. Danyaal Raza, board chair of Canadian Doctors for Medicare, said the delivery of health care is being reorganized around the country and some changes are based on a model in Richmond, B.C., where a hospital reduced wait times for hip and knee surgeries through efficiencies such as booking surgeries centrally.

He said a parallel public-private system has not worked in some countries, including Australia and Scotland.

Day said his case has so far cost $6 million, with much of the money raised by the Canadian Constitution Foundation, but the province has refused to divulge how much it has paid in taxpayers' dollars since 2009.

This report by The Canadian Press was first published Nov. 17, 2019