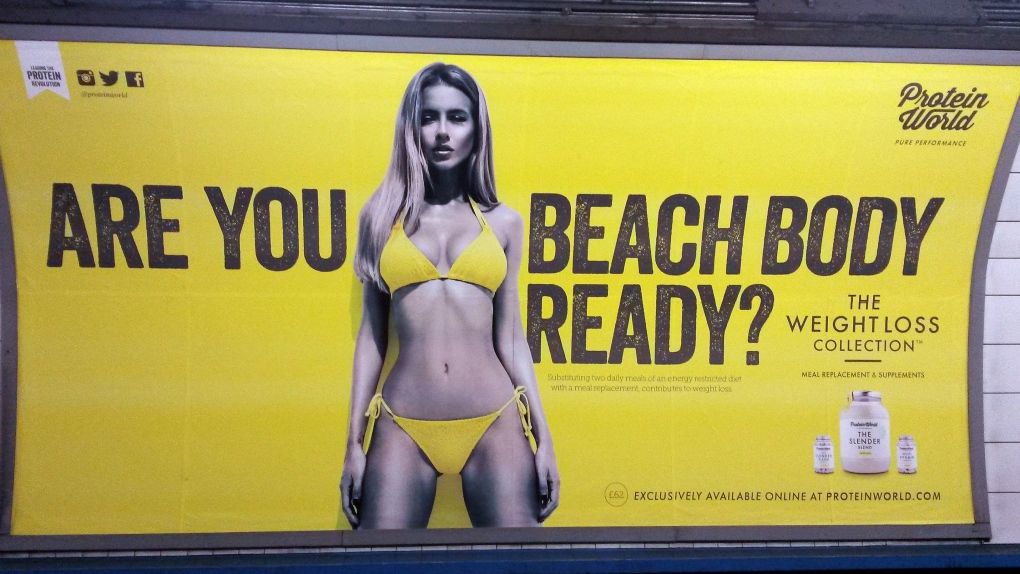 This is an April 27, 2015 file photo of a Protein World advert displayed in an underground station in London. (Catherine Wylie/Pa, File via AP)

LONDON -- Advertising that promotes an unhealthy body image will be banned on London's subway network, in a move that signals a backlash against suggestive marketing in public places.

Starting next month, Transport for London will not allow ads that cause pressure to conform to "unrealistic or unhealthy body shape," London Mayor Sadiq Khan said in a statement.

"As the father of two teenage girls, I am extremely concerned about this kind of advertising which can demean people, particularly women, and make them ashamed of their bodies," Khan said. "It is high time it came to an end."

Concerns were raised last year when an advertisement featuring a model in a bikini asked "Are you beach body ready?" The ad promoted a weight loss supplement and prompted 378 complaints to the Advertising Standards Authority last year -- one of the most complained about ads in 2015.

The authority has the ability to ban ads that are likely to cause widespread serious offence or harm once they come into public space.

What Khan and Transport for London are moving to do, however, is to prevent them from coming into public spaces in the first place. The recently elected Khan fulfilled a campaign pledge by asking TFL to establish a steering group that includes its advertising partners and a range of stakeholders that reflect London's diversity "to monitor TFL's approach to advertising and to keep its policy under regular review."

Unlike a billboard on city streets, where there is some distance, or a magazine, where you can turn the page, the nature of advertising on the Underground means that it comes directly into a traveller's personal space.

"We have a duty to ensure the copy we carry reflects that unique environment," said Graeme Craig, TFL's commercial development director.

The decision reflects a backlash against advertisements that promote an unrealistic, photo-shopped, hyper-perfect view of the world -- particularly of women and their bodies.

While some companies, such has Dove, have made an effort to counter the narrative, it is unusual for a media owner such as TFL to take the initiative and work toward a standard of, at a minimum, "do no harm," said Leslie Hallam, an expert in advertising psychology who teaches at the University of Lancaster.

"These are public spaces," he said. "You've got kids going down there."

Khan said the policy revision is meant to make clear that ads which can be reasonably seen to cause pressure, or create body confidence issues, are not appropriate.

"Nobody should feel pressurized, while they travel on the Tube or bus, into unrealistic expectations surrounding their bodies," he said. "I want to send a clear message to the advertising industry about this."