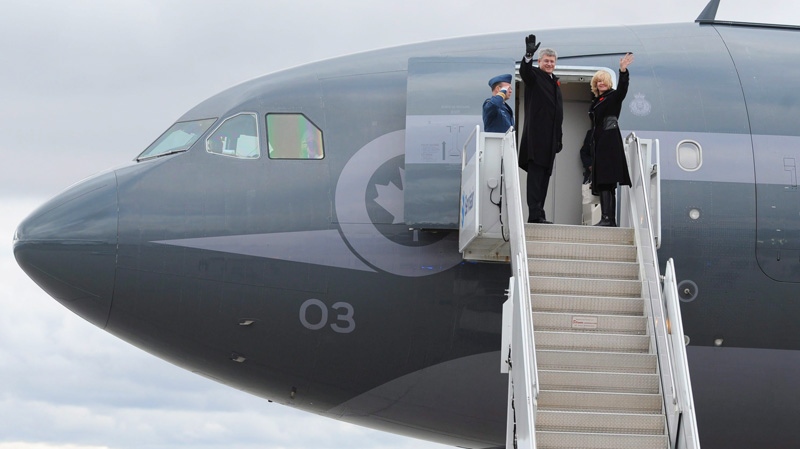 OTTAWA - Stephen Harper's senior bureaucrats have been racking up some hefty airfares at a time of government restraint and controversy over travel.

Travel expenses recently posted for the final quarter of 2011 show executives at the Privy Council Office, the prime minister's own department, paid costly fares last year on some of the most competitive routes to Europe and elsewhere.

The clerk of the Privy Council, Wayne Wouters, paid almost as much for a round-trip flight to London -- $6,625 -- for a public-service summit in November.

Paris, another popular European destination with plenty of airline competition, was also a favoured spot for Privy Council bureaucrats, who paid sky-high prices to get there.

Yvan Roy, legal counsel to Wouters, billed taxpayers $4,607 for a round-trip flight to Paris last October. The posted expense report does not explain the purpose of the trip or provide related costs, but a spokesman said it was for a conference hosted by the French government.

Another senior public servant in Harper's department -- Joseph Wild, assistant secretary to cabinet -- spent $4,367 on airfare to an OECD conference in Paris.

The Irish capital of Dublin was also the destination for another hefty fare -- $5,117, paid by Kristina Namiesniowski, assistant secretary to the cabinet. She was there to learn about "e-government."

The jetsetters at Privy Council Office racked up other pricey airfares for several multi-stop trips overseas, making it difficult to compare prices directly.

Ward Elcock billed a whopping $15,278 to fly to four cities in Australia and New Zealand last October for two weeks of "meetings." Elcock was travelling as the prime minister's special adviser on human smuggling.

And Rigby's week-long visit to Munich and London cost the treasury $6,733 in airline tickets.

All these travellers were public servants flying commercial, rather than the political staff who work inside the Prime Minister's Office, which is part of the Privy Council Office.

Harper and his political staff typically fly on government-owned aircraft, rather than commercial airlines, largely for security and logistical reasons.

The Harper government was embroiled in several travel-related controversies in 2011. CTV News reported in September that the chief of defence staff, Gen. Walter Natynczyk, spent almost $1.5 million since 2008 flying on government-owned Challenger aircraft, once to a Caribbean holiday.

And late last year, it was revealed Defence Minister Peter MacKay called in a military search-and-rescue chopper to take him from a vacation at a Newfoundland fishing camp to a nearby airport, from which he flew to a government announcement in Ontario.

The Natynczyk controversy triggered an internal memo to Harper, dated Sept. 29, outlining a cat's cradle of rules for travel spending and use of government aircraft.

The six pages of detailed policy were reviewed "in the context of recent and periodic media attention on issues of government travel," says the document, obtained by The Canadian Press under the Access to Information Act.

It notes that most senior public-service executives, such as those in the Privy Council Office, can take advantage of higher-cost business-class fares if the trip is 850 kilometres or more one way -- which applies to overseas destinations, including Europe. Ottawa to London, for example, is almost 5,400 kilometres.

None of the posted airfares for Privy Council Office executives in 2011 indicate the fare type. Economy return-flights from Ottawa to London booked three months in advance currently cost about $1,200, while business class is about four times as much.

The memo to Harper cites a temporary cap on business-class travel imposed by the 2009 federal budget, which banned these higher-class tickets for flights of less than two hours for senior executives in the public service.

"While the travel cap is no longer in place, organizations are still expected to restrain spending growth in these areas, consistent with the Budget 2010 restraint measures and the Budget 2011 focus on improving the efficiency and effectiveness of government operations and programs," says the Sept. 29 document.

"The Government has clearly taken steps to reduce spending associated with travel and appropriately placed the onus on deputy heads to manage this reduction, including a reduction in the use of business class travel."

The memo is signed by Wayne Wouters, the clerk of the Privy Council who billed taxpayers $6,625 for a flight to London in November.

As the equivalent of a deputy minister, Wouters is subject to a looser set of travel rules. They allow him to use business class entirely at his discretion, without any requirements of minimum distances or flight times.

For most of the public service, business class is allowed only if the air travel lasts more than nine hours.

First-class travel, the highest-grade, is generally forbidden except for cabinet ministers who can book first-class for overseas flights in some circumstances, "such as when ministers are obliged to conduct business shortly after deplaning."

A spokesman for the Privy Council Office, Raymond Rivet, says all of the flights booked by department executives in 2011 "were purchased using the government approved travel supplier and in compliance with government directives."

"For some of the travel, economy class was used for the airfare portion within Canada," he added.

Travel costs for the Privy Council Office, including travel, meals and accommodations, were $2.6 million in 2010-11, down from $3.2 million in the previous year. In the first 10 months of the current fiscal year, travel costs were $1.7 million, Rivet said.