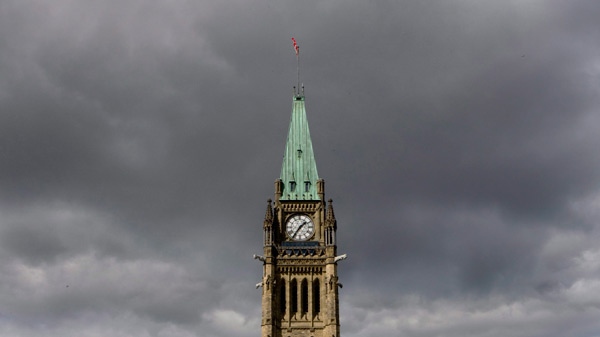 Storm clouds move in over the Peace Tower on Parliament Hill in Ottawa, Sunday, Sept. 13, 2009. (Adrian Wyld / THE CANADIAN PRESS)

OTTAWA - It's not small town cheap when you add it all up.

A federal government agency set up to help struggling farmers spent $11,320 for golf balls and tees over the last two years.

The same agency, Farm Credit Canada, doled out another $34,255 for 454 tickets to "sporting events."

Despite the golfing and cheering, there was still enough time for Tim Hortons -- to the tune of $20,500 dished out for refreshments.

The outlays for entertainment and pick-me-ups were only a fraction of millions of dollars worth of detailed spending by all departments and agencies disclosed in the House of Commons this week.

The rush of documents on obscure expenditures was so massive that House messengers had to roll it into the Library of Parliament on a freight trolley. The spending habits of departments and agencies were aired in a torrent of mind-numbing figures in response to a barrage of questions from opposition MPs.

The Canada Mortgage and Housing Corporation spent what appeared to the most for golf balls and tees -- a total of $37,419 for golf balls over the two years and another $7,967 for tees.

The agency, set up in part to help low-income Canadians obtain affordable housing, said the balls and tees were bought "primarily" for charity tournaments. It listed Habitat for Humanity and the Calgary Homeless Foundations as two examples of groups that benefited.

The explanation said the expenditures were of "no cost to the taxpayer" because they came out of the agency's commercial activities.

"That being said, as of October, 2008, CMHC ceased this activity," it concluded.

National Defence spent a whopping $4.8 million on what was described as "drycleaning" over the past two years, although according to the department that sum might have included routine laundry in Afghanistan.

The NDP question on that issue specifically asked how much each department spent on drycleaning, but the Defence Department said its accounting system does not differentiate between drycleaning and laundry.

"Laundry and drycleaning would include the cleaning of operationally used sleeping bags and combat uniforms," it said in an explanation accompanying the information.

There is no doubt, however, that the armed forces spent a total of $2.7 million on 352 staff retreats at "resorts or conference centres" over the same period of time. A total of $5,131 from that went to "hairstylists and estheticians."

That expenditure was attributed to the deployment of three barbers over the two-year period to the Canadian base in Kandahar.

The Department of Public Works, along with other government agencies, added to the complement of government golf balls and tees to a total of $5,812 over the two years.

Many departments reported spending absolutely nothing on entertainment expenses such as golf, sporting events or beverages. Others spent thousands.

The Finance Department was circumspect about how much it spent on promotional hospitality.

"Our corporate systems do not capture the requested categories of expenditures at this level of detail for all items," it said, adding "an exhaustive manual search" would be required.

The department in charge of government purse strings reported that it spent a total of $11,377 for eight television sets over the two-year period and $91,379 for 423 BlackBerry wireless devices.

The request for information included items that ranged from the purchase of hybrid motor vehicles to flowers, carbon offset credits, golf balls, candies, flags and land mines and cluster bombs.

No department, including Defence, reported spending on mines and cluster bombs.