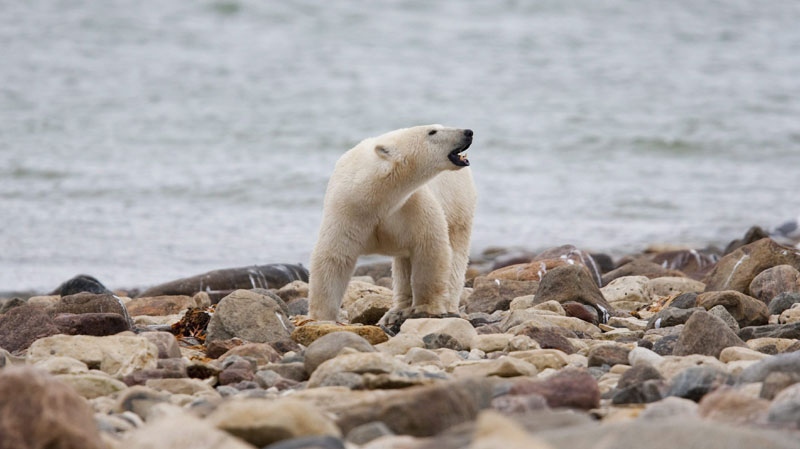 A male polar bear walks along the shore of Hudson Bay near Churchill, Man. on Monday Aug. 23, 2010. (THE CANADIAN PRESS/Sean Kilpatrick)

The federal government is set to list polar bears under Canada's species-at-risk legislation.

On July 2, Ottawa gave notice of the proposal to list the polar bear "as a species of special concern under the Species At Risk Act."

The proposal is undergoing a 30-day public comment period.

A decision is anticipated to be made in November.

In an e-mail from Environment Canada's spokesperson Mark Johnson, the ministry told CTV.ca on Wednesday that a "careful analysis of comments received" after the 30-day weigh-in period will be conducted before a final decision is made.

Presently, polar bears are not listed as endangered under the Species At Risk Act (SARA).

If the iconic mammal becomes listed as a "species of concern", a plan would have to be enacted within the next three years in order to prevent the bear from becoming threatened.

The proposed listing comes almost three years after the Committee on the Status of Endangered Wildlife in Canada suggested the bear be listed under SARA because of the likelihood the bear's habitat will become threatened due to climate change.

The committee, which advises the government on threats facing animals across the country, said in its 2008 report that "although there is uncertainty over the overall impact of climate change on the species' distribution and numbers, considerable concern exists over the future of this species in Canada."

Not everyone, however, agrees with the committee's assessment.

In a press release published in 2010, Nunavut's Minister of Environment said "due to a lack of evidence indicating that polar bears meet the criteria for the Special Concern designation, the Government of Nunavut is not supporting Environment Canada's proposal to change the listing."

The press release went on to say that Inuit hunter have a close relationship with the land and wildlife, and according to them, the overall population of polar bears is not declining.

But the federal government says the designation of polar bears as endangered will not impinge on Inuit hunting rights.

Environment Canada told CTV.ca on Wednesday that the "proposed listing would not trigger any prohibitions."

But even if designation does not impose on the traditional hunting rights of Inuits, there are doubts the listing will actually address what's threatening polar bears.

The listing is a "good process" however it does not tackle the polar bear's "number one threat" which is fossil fuel-induced global warming, Peter Ewins the senior Artic species officer with the World Wildlife Federation Canada told CTV.ca on Wednesday.

Canada is home to approximately 15,000 polar bears -- about 60 per cent of the world's polar bear population.

According to the World Wildlife Federation, the main threats to the survival of the polar bear population include: