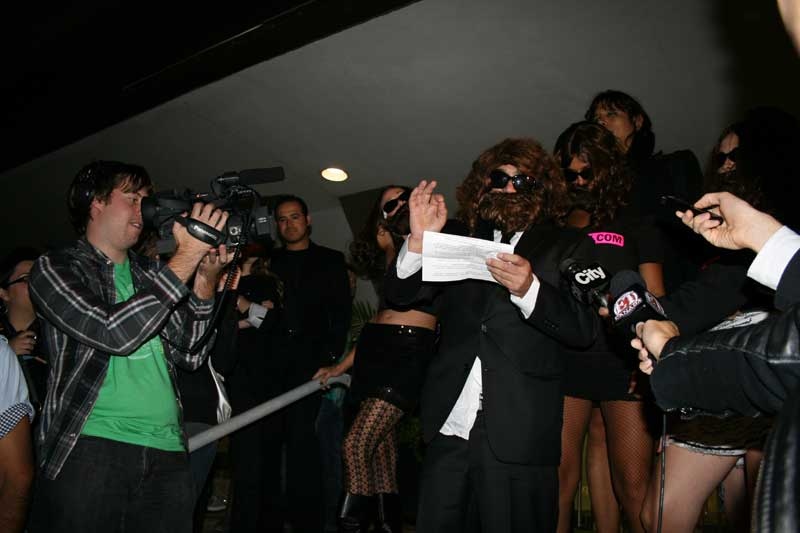 The fake Joaquin Phoenix declares to the media since the "other" Joaquin didn't show up this time, he is for real. (Sheri Block/CTV.ca)

Turns out the fake Joaquin Phoenix really is... fake! Shocking, I know.

After rumours were circulating Thursday that a fake Joaquin Phoenix was on the loose at TIFF, we heard that this imposter would be showing up for the screening of Casey Affleck's new documentary "I'm Still Here" and that a showdown between him and the "real" Joaquin could be taking place.

Was this guy really an imposter? Would the real Joaquin show up? How about Affleck? Who was this Diamond Darryl K from Nuclear Lounge Media who sent the press release? Was this just a hoax to promote the movie? Those were the questions circulating among all the different media members who showed up outside the Varsity Theatre Friday night to find out.

Most reporters believed this was a scam, but somehow we all showed up anyway. A black limo finally arrived.

Out popped a bunch of girls in short skirts, followed by the fake Joaquin. His fake beard was so, well, fake, that it was laughable. He marched up the stairs to make a statement, as the media collectively groaned.

"I resent being labeled as an imposter by the press. I am not an imposter! I've been performing my hip-hop now for more than three years, long before the other Phoenix announced his career change," said the fake Joaquin.

He declared he was the real Joaquin Phoenix and since the "other" Joaquin didn't show up this time, we should all come back next Saturday night when the movie screens again -- because a showdown might happen then.

He also claimed that in July, 2009 Affleck's team scoured the internet for material to include in his film and the fake Joaquin was encouraged to offer up his performance. He says he doesn't know if his material made the final cut.

Whether this whole thing was cooked up by Affleck's team to promote the movie or something completely independent from it, I don't think I'm alone when I say I no longer care.