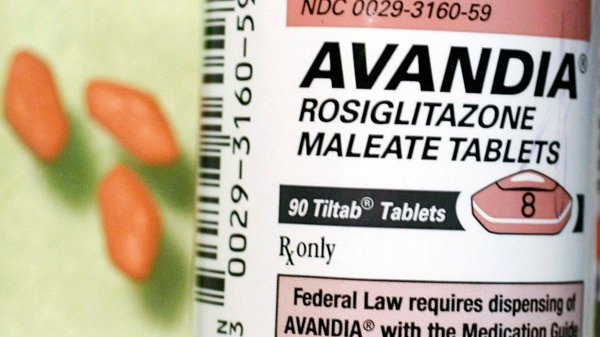 A bottle of Avandia pills at a Maximart Pharmacy in California. (AP / Paul Sakuma)

European regulators are pulling Avandia off the market, deciding the diabetes drug's risks outweigh its benefits.

But U.S. officials will allow the drug to stay, though with significant restrictions on its use.

In separate statements, the Food and Drug Administration in Washington and the European Medicines Agency (EMA) in London both noted the risks associated with Avandia. Yet they decided on different courses of action.

"The FDA is taking this action today to protect patients, after a careful effort to weigh benefits and risks," FDA Commissioner Margaret A. Hamburg said in a statement. "We are seeking to strike the right balance to support clinical care."

"Allowing Avandia to remain on the market, but under restrictions, is an appropriate response," added Dr. Janet Woodcock, director of the FDA's Center for Drug Evaluation and Research, "given the significant safety concerns and the scientific uncertainty still remaining about this drug."

The FDA will require that the drug's manufacturer, GlaxoSmithKline, develop a restricted access program for Avandia.

Under the program, Avandia will be available to new patients only if they are unable to achieve glucose control on other medications and are unable to take Actos (pioglitazone) -- the only other drug in this class.

Current U.S. users of Avandia who are benefiting from the drug will be able to continue using the medication if they choose to do so.

Doctors will have to attest to and document their patients' eligibility; patients will have to review statements describing the cardiovascular safety concerns associated with this drug and acknowledge they understand the risks.

The agency anticipates that the program will limit use of Avandia significantly.

In European, physicians are being advised that affected patients need to be transitioned to alternative treatment options.

The EMA says the suspension will remain in place unless convincing data are provided that identify a group of patients in whom the benefits of the medicine outweigh its risks.

GSK released to the regulators' decision by saying it continues to believe that Avandia is an important treatment for patients with type 2 diabetes but will work with the FDA and EMA to follow their requests.

"GSK will voluntarily cease promotion of Avandia in all the countries in which it operates and will continue to respond to requests for information and support from healthcare professionals and patients," it said.

Avandia was once Glaxo's second-biggest seller but sales have tumbled in recent years and Glaxo said it expected minimal sales in future.

Both Avandia, known generically as rosiglitazone, and rival drug, Actos, or pioglitazone, made by Takeda Pharmaceutical, are known to raise the risk of heart failure.

But Avandia has also been linked to an increased risk of heart attacks in a number of studies.

Health Canada has been watching closely the recommendations of other health regulators, particularly since Canadians filled 1.373 million prescriptions of Avandia and its cousin, Actos, in 2009 to control Type 2 diabetes.

It remains unclear what steps Health Canada will take in light of Thursday's decisions in Europe and the U.S.

The first heart risk worries about Avandia were raised in 2007, prompting the FDA to commission a group of experts to review the drug. They decided to keep the drug on the shelves, but asked that the drug's warning label be strengthened.

In July, U.S. health advisers recommended to the FDA that Avandia be allowed to stay on the market but with additional warnings on its label The FDA said Thursday those labeling changes will be made.