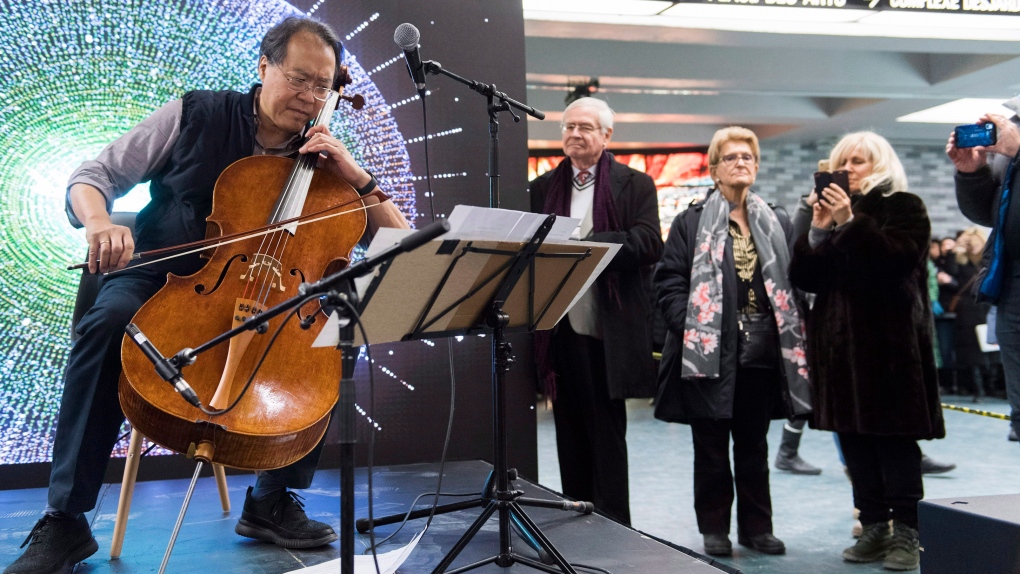 Ma, 63, played both alone and accompanied by local poets, and ended the 20-minute show by inviting the crowd to sing along with what he called "the song that, for me, means Montreal": Leonard Cohen's Hallelujah.

The event, which was co-organized by entertainment company Lembas Works, was billed as a way to "explore connections and disconnections in contemporary lives."

The Chinese American cellist sat on a plastic chair, smiling and gesturing at the crowd as he played in front of a black and white screen.

The audience sat or kneeled on the floor in a cordoned-off section of the platform, while crowds of commuters streamed by only feet away, hustled along by transit authorities.

Ma was accompanied by live poets, who were invited to read their works at the microphone, but also by bird chirps and other pre-recorded sounds.

In fluent French, he invited the audience to contemplate the music, and how it interacted with the sound of the city and the distant trains.

"The music of the metro, everything in life, the church bells we heard, it unites us, it dignifies us," he said.

He gave a nod to his surrounding, and noted that transit, like music, is a unifying experience.

"We're in a metro, in the transport that links us together, because we move every day from one place to another," he said.

The French-born cellist's concert was part of what his website calls a "day of action" aimed at exploring the topic of culture and its role in humanizing technology.

His other events on Saturday included discussing music's effects on the brain with artificial intelligence researchers, and attending a film screening exploring how technology and media can increase the visibility of Indigenous voices in Canada.

Concert-goers Josiane Lefebvre and Anik Filion, who have both seen Ma play in more traditional concert venues, said Saturday's event was different from his usual settings.

Filion, an amateur cellist, said this one was aimed more at the general public, which she saw as a good thing.

"What I found touching was that there were many children behind him, many families, and one even had a cello," she said.

Lefebvre, a music teacher, said she felt that hearing 17th century Bach in the modern subway tied in well with Ma's message of interconnectedness.