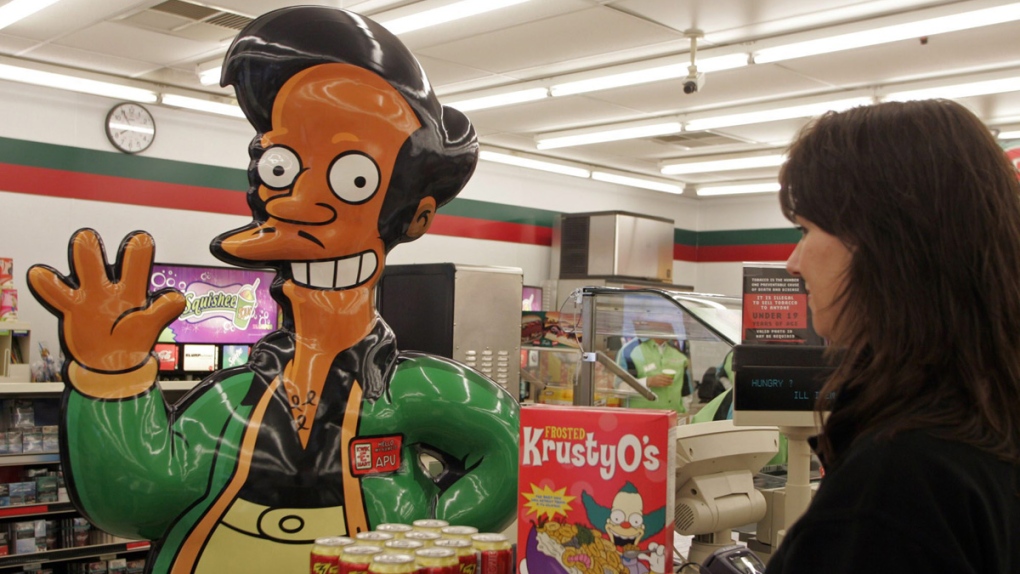 An Apu figure at a Simpsons-themed Kwik-E-Mart store in Coquitlam, on July 3, 2007. (MARKETWIRE PHOTO/7-Eleven Canada Inc.)

"The Simpsons" briefly addressed Sunday criticism of its portrayal of its Indian shop owner, Apu. But a comedian who helped spark a conversation about the character calls the show's response "sad" and attacked the show on Twitter for reducing a discussion about racism to political correctness.

Sunday's episode featured Marge sharing her favourite childhood book with her daughter, Lisa. Marge realizes the book is more racist and offensive than she remembered and attempts to edit it as she reads. The story, titled "The Princess in the Garden," contains stereotypes about people of Irish and Latin American descent.

Lisa reacts to the story by saying, "Something that started decades ago and was applauded and inoffensive is now politically incorrect. What can you do?" A photo of Apu appears and Marge says, "Some things will be dealt with at a later date" and Lisa adds, "if at all."

Comedian Hari Kondabolu, who wrote the documentary "The Problem With Apu" about how marginalized groups are represented in pop culture, called Sunday's scene a "jab" at progress .

"In 'The Problem with Apu,' I used Apu & The Simpsons as an entry point into a larger conversation about the representation of marginalized groups," Kondabolu thumbed out in a tweet. "The Simpsons response tonight is not a jab at me, but at what many of us consider progress."

After journalists reached out to Kondabolu following Sunday's episode, he tweeted, "Congratulations to the Simpsons for being talked about & being seen as relevant again."

Other South Asians also took to social media to blast the episode over the small mention of Apu.

Chris Alexander, a spokesman for 20th Century Fox Television, said the show's producers are declining comment and prefer to let the episode speak for itself.

On the show, Apu runs the Kwik-E-Mart, where he sells expired food, rips off customers and delivers the sing-songy slogan, "Thank you, come again."

People of South Asian heritage have criticized the heavily accented Apu character for reinforcing stereotypes which they say led to world bullying, self-loathing and embarrassment.

The character is voiced by Hank Azaria, a white Jewish man who was raised in the New York borough of Queens.

Azaria told reporters at the Television Critics Association press tour in January that "The Simpsons" producers planned to address the controversy around Apu. "The idea that anybody, young or old, past or present, was bullied or teased or worse based on the character of Apu on 'The Simpsons,' the voice or any other tropes of the character is distressing," he said.

"This character -- the only representation that we have -- led a lot of kids who were born and raised here to feel non-American," Kondabolu, who also grew up in Queens, told The AP last year. "If you don't nip racism in the bud from the beginning, it mutates and finds other ways of surviving."

TO THE JOURNALISTS WHO HAVE ASKED ME FOR A PUBLIC STATEMENT ABOUT LAST NIGHT’S SIMPSONS EPISODE, I JUST WANT SAY: “Congratulations to the Simpsons for being talked about & being seen as relevant again.”