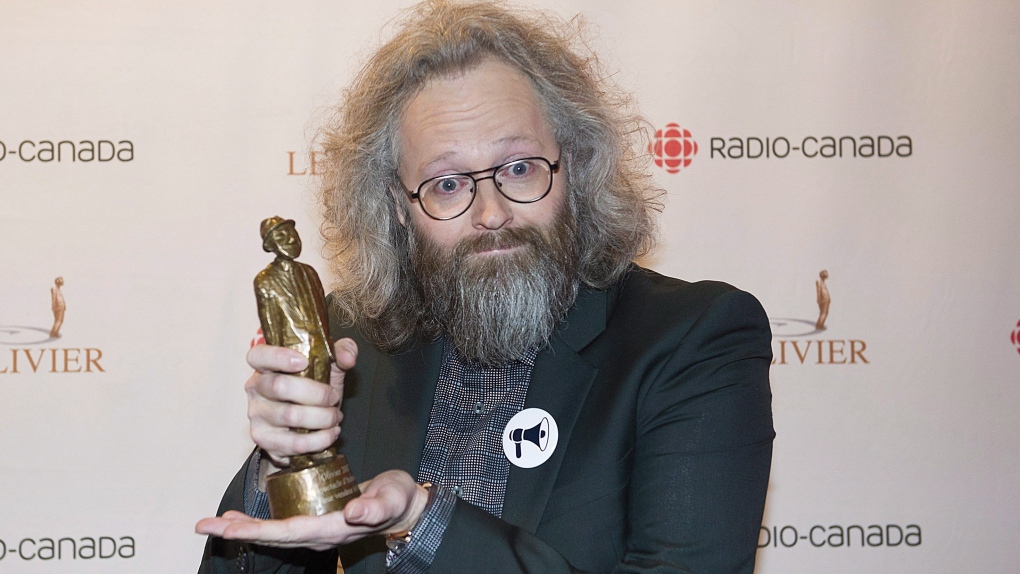 Francois Bellefeuille holds up his trophy at the gala Olivier awards ceremony in Montreal, Sunday, December 10, 2017. (THE CANADIAN PRESS/Graham Hughes)

MONTREAL -- The sexual misconduct scandal that has dominated Quebec's entertainment headlines this year was front and centre at the annual awards ceremony honouring the best in comedy in the province.

The allegations against Just For Laughs founder Gilbert Rozon were predominant during the Olivier gala on Sunday night, with host Francois Morency tackling head-on the topic of the year in the field of humour.

Morency received lengthy applause when he acknowledged all the victims who've spoken out against their alleged aggressors.

Francois Bellefuille, who won an award for the best-selling first solo show, said he would auction off his award and match the sale price to make a donation to an association of Quebec centres that helps fight against sexual assault.

He also said Just For Laughs would also match the amount raised -- even if he hadn't talked to the organization about it yet.

"But when it's said on television, it's hard to say no after," he said.

After the event, Bellefeuille confirmed on his Facebook page that Just For Laughs would be matching the amount.

The province's comedy scene has been engulfed by serious allegations against former Just For Laughs boss Gilbert Rozon.

The influential entertainment mogul faces allegations from at least 10 women he either sexually harassed or sexually assaulted them.

Comedians attending the event wanted to put their profession first, but acknowledged on the red carpet it was inevitable the issue would be addressed during the evening.

"I think it's worth denouncing what happened, and also, it's not over, hopefully, because other things have to come out," said Julien Lacroix, who went on to win the award for discovery of the year.

He expected Morency to tackle the issue quickly, which the host did, but he hoped it would be a festive gala.

"It's still the humour we celebrate," he said.

Sighing, Morency joked he has called the gala his "annual burnout."

Last year, he had to navigate a controversy involving comedians Mike Ward and Guy Nantel, who had a number censored at the gala.