Same old song: The debate over copyright litigation in the music industry 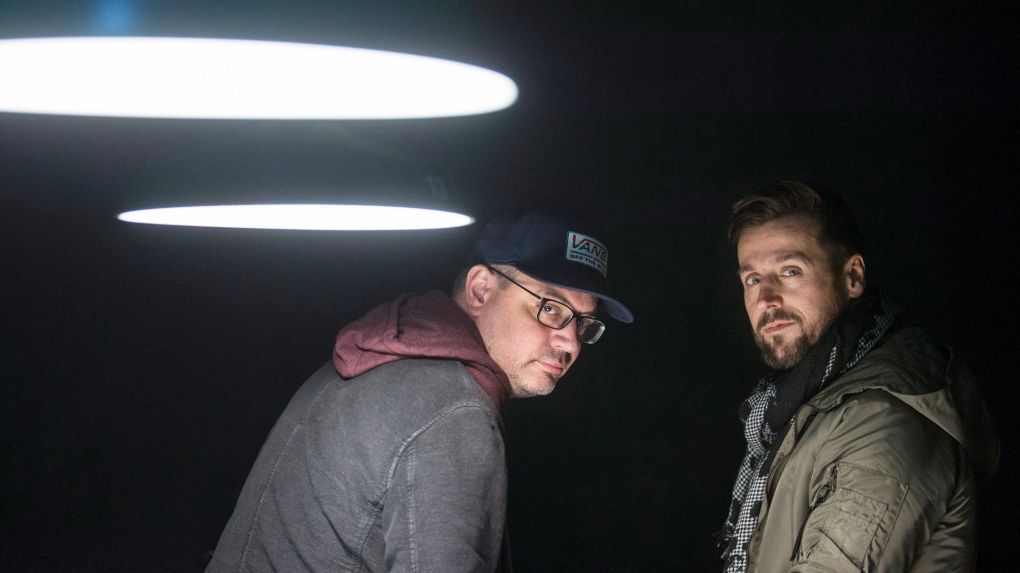 Raine Maida, right, of Our Lady Peace, and Matthew Good are pictured in Toronto on Monday, January 22 , 2018. (THE CANADIAN PRESS/Chris Young)

TORONTO -- Matthew Good didn't need very long before he was certain Simple Minds ripped him off.

Hearing the opening notes of the Scottish rock band's 2002 single "Cry," he recognized a hook that was unmistakably similar -- identical, even -- to the guts of his band's "Indestructible," recorded five years earlier.

"They basically took 'Indestructible' note for note," Good recalled in a recent interview. "They completely admitted they were in the wrong."

Even knowing that, Good decided against suing the band, whose mega-hit "Don't You (Forget About Me)" made them international stars. He chalked it up to a mistake by the album's producer rather than malicious intent and doesn't get paid royalties off the track.

"Let's face it, mathematically there are only a certain number of chord progressions you can do," he explained.

"But that said, there are always many ways to work around (the similarities)."

Plagiarism allegations are frequently a hot topic in the music industry, but rarely does the conversation leak outside recording studios quite as it has in recent memory.

In January, Lana Del Rey defended her moody ballad "Get Free" on Twitter saying Radiohead wanted royalties for its similarity to their hit "Creep." She felt her song was an original work that wasn't inspired by the rock smash hit, which itself was subject to a copyright settlement over sounding like the Hollies' 1970s track "The Air That I Breathe."

Del Rey's dispute sparked widespread debate on social media as music fans rushed to YouTube and streaming services to deliver their own verdicts.

Raine Maida of Our Lady Peace was among those who were stunned by the parallels.

"I love Lana, but I listen to that and there's just too many steps where it's like, 'OK the chords are the same, the melody, the way it goes in the chorus,"' he said.

"I think there's honest mistakes and then those types of things."

But Maida acknowledges it's difficult to parse some of these cases, especially since songwriters can hear a golden oldie on the radio and find themselves accidentally writing a melody that resembles it months later.

"When you start piling on things that are all similar from a song, that's dangerous ground," he said. "That's the difference between being inspired and theft."

Three years ago, a jury awarded Marvin Gaye's children over US$7 million after examining the sound of "Blurred Lines," a massive radio hit from pop singers Robin Thicke and Pharrell. They ultimately decided the songwriters copied Gaye's 1977 song "Got to Give It Up."

Steven Page, ex-member of the Barenaked Ladies, still bristles at the thought of how that case may have stymied artistic creativity and encouraged more litigation.

"It's really dangerous for writers," he said, pointing to evidence that even the Beatles pulled from Motown in their catalogue.

"I don't think you should be able to copyright a vibe or a feel because that's what's in the ether. Melodies and lyrics? Yes, those are absolutely copyrightable."

His former bandmate Ed Robertson sees it a little differently and considers it a trend in today's popular music to "all but copy something else."

"A lot of modern production is based on nostalgia of exact sounds of rhythm tracks, and when it starts you think, 'Is this Kool and the Gang?"' he said as an example.

"But that's what they're going for. It's a modern esthetic that's going to come back to bite a lot of people. It's not just paying tribute ... it's ripping someone off."

Robertson, who co-writes most Barenaked Ladies songs, said he tries to anticipate and reject similarities in his own work.

"I'm always checking myself: 'Where does this come from?" he said. "'What's the genesis of this idea? Is it a Genesis song?"'

Jen Schaffer, a Toronto-based musician and lawyer who once represented university students in plagiarism cases, believes recent litigation is driven by a music industry that's strapped for cash and fighting for scraps. She isn't convinced that approach serves the art.

"What makes a piece of art distinctive is a big, old question," she said.

"I'm not sure the blunt tool of the law is one that helps refine it."

Schaffer has debated this point with her husband Simon Law, who's her bandmate in Jen Schaffer and the Shiners. He also co-wrote "Back to Life (However Do You Want Me)," the Grammy-winning 1989 single by Soul II Soul which helped usher in a new era of R&B/soul styles and spawned countless imitators.

Law points to others songs that seemed to borrow from the track he helped create, including Enigma's "Sadeness," which layered a Gregorian chant over a similar beat, and a popular remix of Suzanne Vega's "Tom's Diner" by British electronic duo DNA.

"There's nothing new under the sun, man," he lamented. "It's just how you fit the bits together."

The composer said he has run up against his own bouts of unintentional plagiarism in the production studio. He remembers once writing a soul track structured around a "beautiful melody" he felt would make a great original song.

"And then my partner who I was working with said, 'Wait, a minute, that's the theme to 'Titanic.' What are you doing?"' he said. "I didn't know. It was somewhere in my head.

"Of course, I just dropped it like a hot potato."