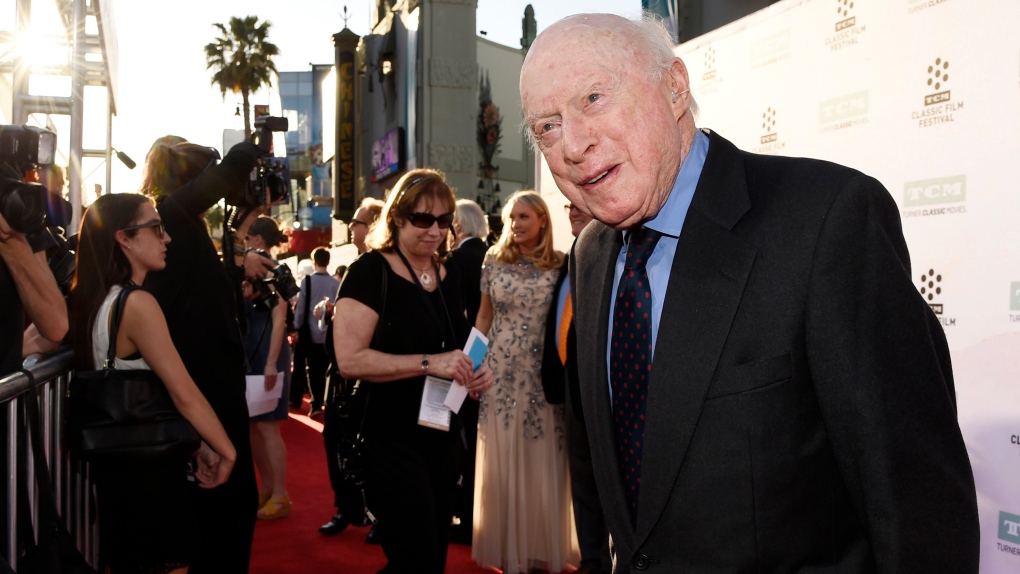 Norman Lloyd poses before a 50th anniversary screening of the film 'The Sound of Music' at the opening night gala of the TCM Classic Film Festival on March 26, 2015, in Los Angeles. (Photo by Chris Pizzello/Invision/AP, File)

LOS ANGELES -- Norman Lloyd, whose role as kindly Dr. Daniel Auschlander on TV's "St. Elsewhere" was a single chapter in a distinguished stage and screen career that put him in the company of Orson Welles, Alfred Hitchcock, Charlie Chaplin and other greats, has died. He was 106.

Lloyd's son, Michael Lloyd, said his father died Tuesday at his home in the Brentwood neighborhood of Los Angeles.

His credits stretch from the earliest known U.S. TV drama, 1939's "On the Streets of New York" on the nascent NBC network, to 21st-century projects including "Modern Family" and "The Practice."

"If modern film history has a voice, it is Norman Lloyd's," reviewer Kenneth Turan wrote in the Los Angeles Times in 2012 after Lloyd regaled a Cannes Film Festival crowd with anecdotes about rarified friends and colleagues including Charlie Chaplin and Jean Renoir.

The wiry, 5-foot-5 Lloyd, whose energy was boundless off-screen as well, continued to play tennis into his 90s. In 2015, he appeared in the Amy Schumer comedy "Trainwreck."

His most notable film part was as the villain who plummets off the Statue of Liberty in 1942's "Saboteur," directed by Hitchcock, who also cast Lloyd in the classic thriller 1945's "Spellbound."

His other movie credits include Jean Renoir's "The Southerner," Charlie Chaplin's "Limelight," "Dead Poets Society" with Robin Williams, "In Her Shoes" with Cameron Diaz and "Gangs of New York" with Daniel Day-Lewis.

On Broadway, Lloyd played the Fool opposite Louis Calhern's King Lear in 1950, co-starred with Jessica Tandy in the comedy "Madam, Will You Walk" and directed Jerry Stiller in "The Taming of the Shrew" in 1957.

He was also part of Welles' 1937 modern-dress fascist-era production of "Julius Caesar" that has gone down in history as one of the landmark stage pieces in the American theater. Norman played the small but key role of Cinna the Poet, opposite Welles' Brutus. Stage magazine put Welles on its June cover and proclaimed the production "one of the most exciting dramatic events of our time."

Born Nov. 8, 1914, in Jersey City, New Jersey, Lloyd jumped into acting as a youngster in the 1920s. On stage, he was a regular with Welles' Mercury Theater, the groundbreaking 1930s troupe that also featured Joseph Cotton and Agnes Moorehead and formed the basis of Welles' classic film debut, "Citizen Kane."

His other plays included "Crime," directed by Elia Kazan and featuring his future wife, Peggy Craven. The couple were married for 75 years, until Peggy Lloyd's death in 2011 at age 98.

TV viewers knew him best as the memorable calm center of St. Eligius hospital on the 1982-99 NBC drama series "St. Elsewhere." His Dr. Daniel Auschlander was originally only supposed to appear in a few episodes, but Lloyd became a series regular and stayed with the show for the entire run. The series would inspire such shows as "E.R." and "Grey's Anatomy."

Lloyd worked steadily as a TV actor and director in the early 1950s, but the political liberal found his career in jeopardy during the Hollywood blacklist period aimed at communists or their sympathizers.

In 1957, Hitchcock came to his rescue, Lloyd told the Los Angeles Times in 2014. When the famed director sought to hire Lloyd as associate producer on his series "Alfred Hitchcock Presents" but was told "There is a problem with Norman Lloyd," Hitchcock didn't back down, Lloyd recalled.

"He said three words: `I want him,"' Lloyd said. He was immediately hired and eventually worked as executive producer on another series, "The Alfred Hitchcock Hour."

His other TV credits include roles in "Star Trek: The Next Generation," "Murder, She Wrote," "The Paper Chase," "Quincy M.E.," "Kojak" and "The Practice."

In 2014, in recognition of his 82 years in show business, and reaching the age of 100, the Los Angeles City Council proclaimed that his birthday of Nov. 8, would be honored as "Norman Lloyd Day."