Rob Stewart wants to save humans with new book, doc 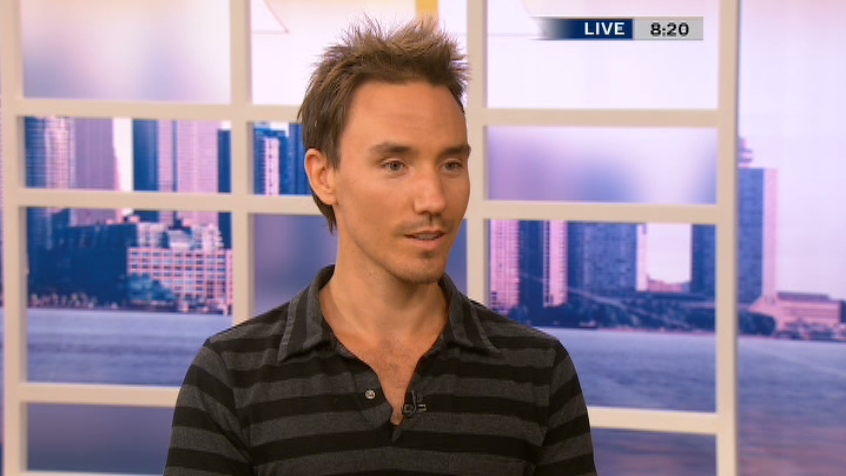 Now, with his new book and film, he's sounding an ambitious alarm on a much bigger cause: the future of humanity.

"This century we're facing some pretty catastrophic consequences of our actions," an impassioned and fact-filled Stewart, 32, said in a recent interview.

"We're facing a world by 2050 that has no fish, no reefs, no rainforest, and nine billion people on a planet that already can't sustain seven billion people. So it's going to be a really dramatic century unless we do something about it."

Stewart is delivering his grave and urgent message in his recently published memoir, "Save the Humans" (Random House of Canada), and the documentary "Revolution," premiering Wednesday at the Toronto International Film Festival.

The book is chock-full of sobering statistics about the massive depletion of fish populations as well as the wide-reaching threat of ocean acidification.

It also details Stewart's adventure-filled, nature-loving life -- from his childhood catching snakes and other creatures, to his time as a global wildlife photographer and his lifelong fascination with sharks that led to his powerful documentary "Sharkwater."

"Sharkwater," which debuted at the Toronto film festival in 2006, put the spotlight on the fast-dwindling population of the world's sharks as well as illegal and recreational fishing, longlinging, finning, climate change and pollution.

It also proved to Stewart's doubters he had conviction, determination and a lot of guts behind his handsome looks.

Stewart and his colleagues even risked their lives for the film, visiting a Costa Rican warehouse that trafficked in illegal shark fin, and confronting poachers on the high seas. His activism has also seen him contracting the bacteria that causes flesh-eating disease and be abandoned in the ocean during a deep-sea dive.

"Sharkwater" became an international hit and prompted people around the world to lobby their governments for bans on shark finning.

But at a 2010 Q&A for the premiere of "Sharkwater" in Hong Hong, Stewart realized it wasn't enough.

"Someone put up their hand and said, 'What's the point of stopping us from eating shark fin soup if all the fish are going to be gone by 2048 anyways?"' said Stewart, noting the statistic came from a study done by Dalhousie University in Halifax.

"That sort of helped ignite this journey, by showing me that there's a bigger issue afoot -- that even if we save sharks, then we lose all the fish and we're in a massive problem."

Despite the success of "Sharkwater," he had an even tougher time making his second film.

"When I started telling people about what my next movie was about, I'd tell them it's about how humans are going to survive the next 100 years, and the most common reaction I'd get right away would be like, 'Yeah, right, good luck with that,"' said Stewart, who studied a zoology at Western University and has a blood python and an emerald tree boa as pets.

"Saving humanity, it turns out, was almost an even less popular thing to do than saving sharks."

As such, Stewart had a tough time finding funding for the film and getting people to believe in him. Eventually he got support from Telefilm Canada as well as some corporations.

With the advent of social media, Stewart believes the potential for an environmental revolution is greater than ever before.

His biggest advice for those who want to join his cause is to spread awareness about it. He also advises people to cut down on not just their waste but also their consumption.

"Consume less of everything," said Stewart, who runs his home on green electricity, rides his bicycle as often as possible, and hardly eats meat.

"The most environmentally friendly car is the car you've got -- drive that car into the ground."

It's also important to engage with your government, he added.

"Right now governments are running amok and they're doing whatever they want, despite citizens wanting something different. So you've got to get involved politically, you've got to let the government know that you disapprove of what they're doing and that you want a world that sustains human life and that doesn't emit massive amounts of carbon into the atmosphere, destroying our very life support system."

Stewart's biggest target for both his book and film is young people.

"Any revolution in the past has been led by people most directly impacted by the atrocity, and when we look at the future what's going to happen it's the youths future that's at stake," he said.

"So they're the ones that are going to bat for this, and they're also not entrenched in the negative side of society and the lives that maybe adults are."

"Revolution" is due to hit theatres across Canada on Earth Day in April 2013.