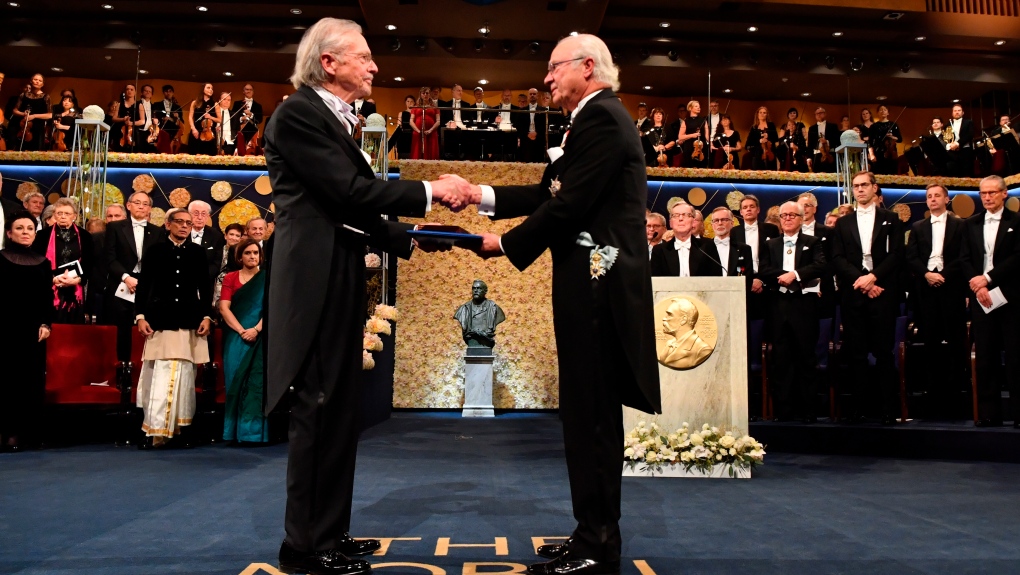 STOCKHOLM -- STOCKHOLM -- Austrian Author Peter Handke received his Nobel Literature Prize on Tuesday amid criticism of him in Sweden and abroad as an apologist for Serb war crimes in the 1990s.

Handke accepted the 9-million-kronor (US$948,000) award from King Carl XVI Gustaf at a ceremony in Stockholm with the winners of other Nobels except for the peace prize, which was presented in Oslo.

Handke has been a staunch supporter of the Serbs and has denied that the massacre of 8,000 Bosnian Muslims in the town of Srebrenica was genocide.

Representatives of seven countries boycotted the awards ceremony in protest, as did a member of the Swedish Academy that chooses the literature prize winner. A member of the committee that nominates candidates for the prize resigned his post.

Albania, Bosnia, Kosovo, Croatia, North Macedonia, Turkey and Afghanistan boycotted the awards ceremony and some of those country's leaders denounced the prize.

"To give the Nobel Literature Prize to a racist personality can have no other meaning than to reward human rights violations," Turkish President Recep Tayyip Erdogan said on Twitter. Kosovo President Hashim Thaci said that "justice will prevail, not lies, denial and fake Nobel prizes."

In the Bosnian capital of Sarajevo, a war victims' association erected a large electronic display portraying Handke as a villain standing next to skulls.

"As a citizen of Sarajevo, I am horrified with this. He is genocide denier. He claims genocide did not happen in Bosnia. We will never forget this," said Sarajevo resident Senka Tinjak.

More than 100 protesters later demonstrated against the award in a Stockholm square.

Many journalists who covered the Bosnian war took to Twitter to denounce Handke receiving the award.

One of them, Peter Maas, told The Associated Press in Stockholm "the ideas that Peter Handke has are extremist ideas, they are held by a discarded minority of people ... The Swedish Academy, the Nobel Prize Foundation, and today the royal family of Sweden - they are the ones now throwing their weight behind these extremist ideas."

The ceremony included awarding the 2018 literature prize to Olga Tokarczuk of Poland. The prize was announced this year after being postponed by the Swedish Academy, which was wracked by turmoil due to a sex scandal.

The physics prize went to Canadian-born James Peebles for theoretical discoveries in cosmology, and Swiss astronomers Michel Mayor and Didier Queloz for finding a planet outside our solar system that orbits a sun-like star.

Americans William Kaelin and Gregg Semenza and Briton Peter Ratcliffe won the medicine prize for discovering details of how the body's cells sense and react to low oxygen levelsJ.

Massachusetts Institute of Technology economists Abhijit Bannerjee and Esther Duflo, who are married, and Harvard's Michael Kremer won the economic prize for research into what works and what doesn't in the fight to reduce global poverty.