Not in the script at rape trial: Weinstein on witness stand 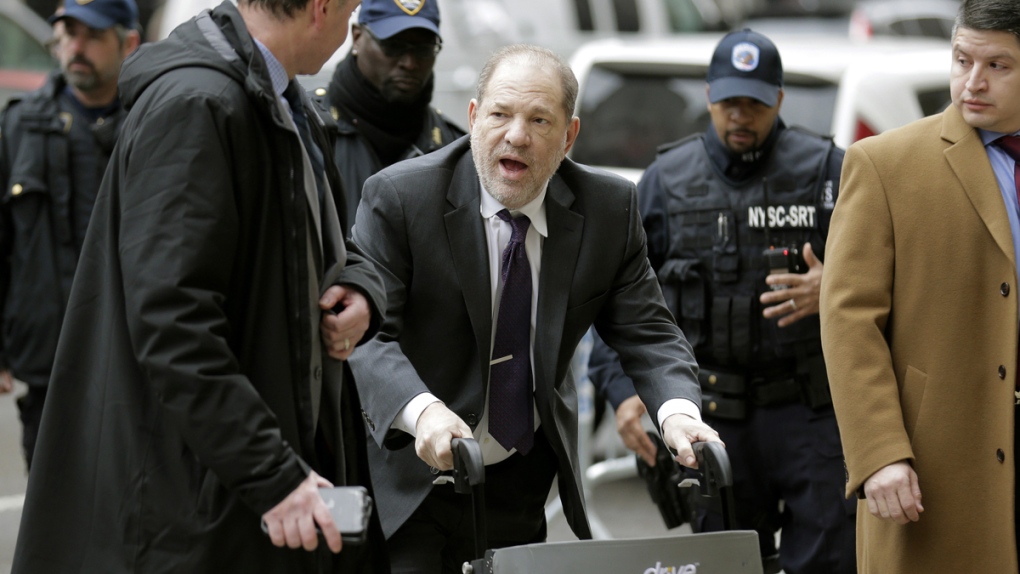 Harvey Weinstein arrives at a Manhattan courthouse for his rape trial in New York, on Feb. 10, 2020. (Seth Wenig / AP)

NEW YORK -- The defence rested its case Tuesday in Harvey Weinstein's rape trial without the disgraced Hollywood mogul taking the witness stand, setting the stage for closing arguments in a landmark #MeToo trial punctuated by graphic testimony from six accusers.

As expected, Weinstein chose not to testify, avoiding the risk of having prosecutors grill him on cross-examination about the vile allegations. He confirmed the decision after returning to the courtroom from meeting with his lawyers behind closed doors for about a half-hour as speculation swirled that they still hadn't talked him out of it.

Asked as he left court if he was thinking of testifying, Weinstein said: "I wanted to."

Defence lawyer Arthur Aidala added that Weinstein "was ready, willing, able and actually quite anxious to testify and clear his name" but didn't do so because his lawyers felt prosecutors "failed miserably" to prove their case beyond a reasonable doubt.

Jurors are expected to hear the defence's closing argument Thursday, followed by the prosecution's closing Friday. Jury deliberations are slated to start Tuesday. Court is closed Wednesday and again on Monday for holidays.

By not testifying, Weinstein followed the example of defendants in other high-profile sex crimes cases. The include Bill Cosby, who didn't take the witness stand either time he was tried for drugging and molesting a woman at his suburban Philadelphia home. After a mistrial in 2017, a second trial resulted in the comedian's conviction.

Weinstein, 67, is charged with raping a woman in a Manhattan hotel room in 2013 and forcibly performing oral sex on a different woman in 2006. Other accusers were called as witnesses as part of a prosecution effort to show he has used the same tactics to victimize many women over the years.

Weinstein has maintained any sexual encounters were consensual.

The Associated Press has a policy of not publishing the names of people who allege sexual assault without their consent. It is withholding the name of the woman accusing Weinstein of raping her in 2013 because it isn't clear if she wishes to be identified publicly.

After the jury left for the day, Weinstein's lawyers sparred with prosecutor Joan Illuzzi-Orbon over her plan to mention in her closing argument that his physical appearance has changed significantly since the time of the alleged assaults.

Weinstein has hobbled into court each day with a walker, parking the device behind the defence table. His lawyers say it's needed because of recent back surgery, but Illuzzi said it seemed more like a prop put there to sway jurors' sympathies.

"It is not a prop! Enough!" Weinstein lawyer Damon Cheronis said.

"You can scream all you like," Illuzzi said. "They did not have to have the walker back there."

After more bickering, Judge James Burke said it was fine for Illuzzi to mention Weinstein's physical changes, but warned: "Leave the walker out of it."

The defence case mainly relied on the testimony of three witnesses that Weinstein's lawyers used to try to cast doubt on the accounts on two of the accusers.

Talita Maia, a former roommate of the woman Weinstein is on trial for allegedly raping, told the jury the woman never gave any indication that he victimized her -- in fact, she said, the woman spoke highly of him and once called him her "spiritual soulmate."

"She seemed to really like him as a person," Maia said. "She would only compliment him."

Maia also gave a breezy description of how the then-aspiring actress and Weinstein first met at a Hollywood party a few months before the alleged rape. She said when the women figured out he was an industry big shot, she jokingly told him "that's why everyone is being so nice to you."

Her roommate, she added, went even further. She testified that the woman put her arm around Weinstein, pinched his cheeks and said: "No, it's because he is so cute."

Another friend of the woman testified Tuesday that she seemed like "her everyday self" when they met up for breakfast with Weinstein just a short time after she alleges he assaulted her.

Thomas Richards, a Hollywood talent agent, testified Wednesday the woman was friendly toward Weinstein during the breakfast and didn't say or do anything to indicate she'd just been raped.

The third witness, Mexican model and actress Claudia Salinas, repudiated the testimony of Lauren Marie Young, one of the women called by the prosecution to bolster the allegations of Weinstein's main accusers.

Asked about Young's claims that she stood by and did nothing while Weinstein groped her at a Beverly Hills hotel in 2013, Salinas responded that it "never happened."

Young had testified that Salinas closed the door behind her and Weinstein as they went into the bathroom, where she alleges he stripped off his clothes, grabbed her breast and masturbated. Once it was over, Young said she found Salinas standing outside the bathroom and shot her an evil look before leaving as quickly as she could.

"If I had done that, I would remember that," Salinas testified. "I would never close the door on anybody."