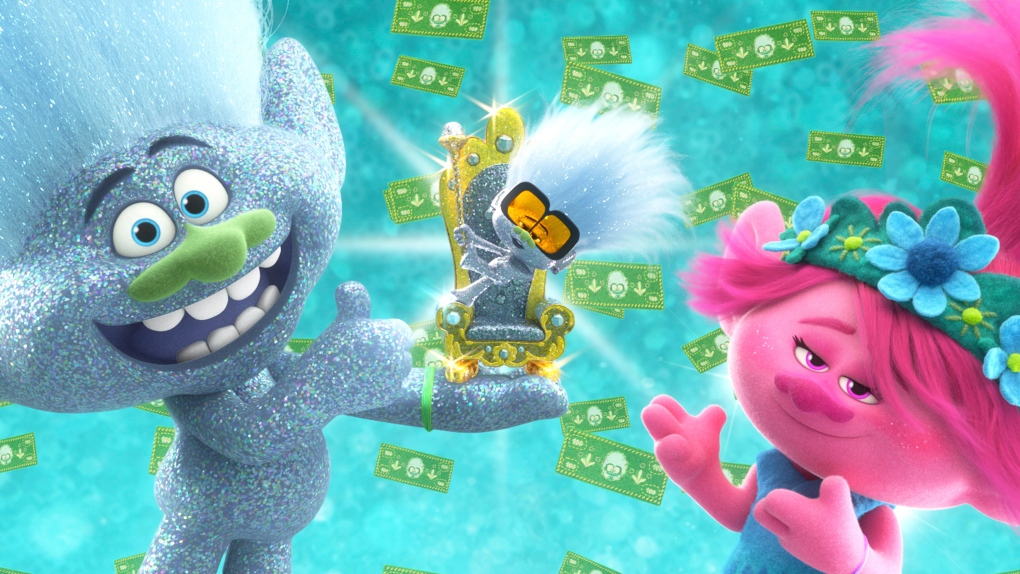 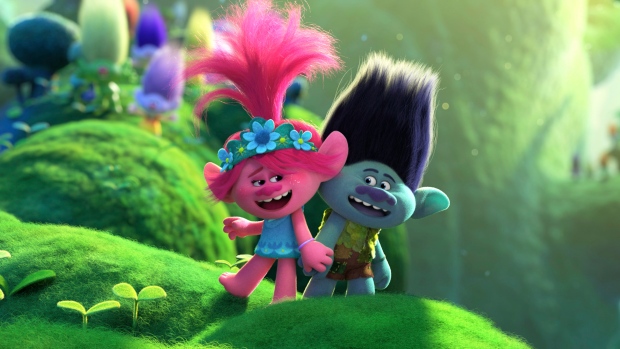 As the first movie to jump ship from theatrical to VOD at the start of the pandemic, “Trolls World Tour” set a precedent. Dozens of movies have followed suit, but this will be remembered as the first. Unfortunately, that is the only groundbreaking thing about this Anna Kendrick and Justin Timberlake sequel.

Returning from 2016’s “Trolls” are Queen Poppy (Kendrick), and her best friends Branch (Timberlake) and Biggie (James Corden). They are pop music loving Trolls who pass the days singing, dancing and hugging until Poppy discovers that there are five other Troll tribes, divided by their musical taste.

“The truth is we are not alone in this world,” says King Peppy (Walt Dohrn, who also directs). “There are other kinds of Trolls. They are not like us. They are different ways in you can’t even imagine. We love music with a hummable hook, a catchy rhythm, and an upbeat melody that makes you want to wiggle your butt. These others Trolls sing different. They dance different. Some of them can’t even grasp the concept of ‘Hammer Time.’”

The Queen and Company set off on a fact-finding mission to visit the other musical colonies.

“I can’t stay home when I know there is a world of Trolls out there,” she says.

On her journey she discovers sounds she doesn’t quite understand.

“They must not know that music’s supposed to make you happy,” she says as a mournful (but not too mournful, this is a “Trolls” movie after all) country song fills the soundtrack.

Later, after hearing classical music for the first time she wonders aloud, “Where’s the words?” But she also discovers a threat in the form of Metal Queen Barb (Rachel Bloom) who plans to use “the ultimate power chord” to assert rock’s place as the official music of all Trolls.

“By the end of my world tour we’re all going to have the same vibe,” says Barb. “We’ll be one nation of trolls under rock!”

“Trolls World Tour” is an update of the “Free To Be… You and Me’s” salute to individuality, tolerance, and comfort with one's identity. Bathed in bright colours, set to kid friendly adaptations of pop, rock, rap and country hits (like “Trolls Just Wanna Have Fun”) and populated by vinyl creatures with DayGlo “Eraserhead” coifs and big goofy smiles, it’s a jukebox movie about finding the things that bring us together, not divide us, while maintaining the things that make us unique.

“Denying our differences is denying the truth of who we are,” says King Quincy (Parliament-Funkadelic’s George Clinton).

Good messages wrapped up in a glitzy, frenetic package is the stock in trade of kid’s entertainment and “Trolls World Tour” delivers in those regards. The colourful visuals, seemingly designed by a Troll on acid, will make kid’s eyeballs dance and the messages are delivered with the subtlety of a slap to the face, so check and check.

What’s missing is the wonderful weirdness that made the original “Trolls” film the strangest children’s entertainment since “H.R. Pufnstuf.” Story wise, this one feels formulaic with less of an edge, but it does deliver a blast of energy that will keep its target audience—kids and stoned adults—happy. 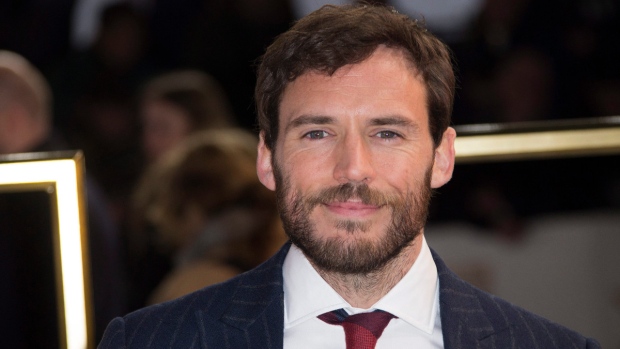 New to Netflix this week is "Love Wedding Repeat," a what-if rom com fantasy that examines one event, a fancy wedding celebration, from several different angles based on a shifting seating arrangement and a nomadic sedative.

Set in an opulent Italian party palace, the action centres around Jack (Sam Claflin), the protective older brother of the bride. It is meant to be Haley's (Eleanor Tomlinson) big day but as everyone knows, wedding days rarely ever go as planned. Every little detail is important, most of all, if you believe this movie, the seating arrangement. A simple shift of a name or two from table to table changes the dynamic and can lead to chaos. Of course, a simple mix-up of names will only be made worse by the presence of angry exes, a sedative that never finds its intended target, an embarrassing men's room incident and the proverbial ‘one that got away' (Olivia Munn).

"Love Wedding Repeat," has all the trappings of a classic farce. Big personalities and misunderstandings are the name of the game here but the unhurried pace feels more like a rom com than it does "Noises Off." Dean Craig, the screenwriter behind the 2007 Frank Oz comedy "Death at a Funeral," finds humour in the shifting-same-day narrative but places the romance front and centre, mostly leaving the screwball antics for another day.

An appealing cast makes the most of this thin but unique twist on romantic time loop farce. Claflin, best known for playing British Union of Fascists leader Oswald Mosley "Peaky Blinders," is the stabilizing force that keeps the fantasy aspect of the story earthbound. Revolving around him are a cast of characters whose actions bring the flights of fancy. As Jack's angry, headbutting ex Frieda Pinto brings both fire and warmth while Tim Key convincingly plays the most socially awkward wedding guest ever. Joel Fry, as a desperate actor trying to impress a famous director, who happens to be seated at the next table, shows a different side from the work he did on "Game of Thrones."

"Love Wedding Repeat" could have used a little more door slamming to amp up the farcical nature of the story but provides a diversion in these strange times, an unusual, if somewhat predictable, rom com with (NO SPOILER HERE, YOU KNEW THIS WAS COMING) a happy ending.

Set in the Parisian suburb of Saint Denis, "School Life' ("La vie scolaire") is an empathetic, if melodramatic, look at a year in the life of Samia (Zita Hanrot), the new Vice Principal of a middle school filled with disruptive students. It debuts on Netflix this week.

Directed by slam poet Grand Corps Malade and Mehdi Idir, the story begins with Samia, an idealistic young teacher, being warned by her new colleagues. Her students, she is told, are lazy and impossible to discipline. But where her jaded co-workers see students destined to fail, she sees young people who need a roadmap for the lives they are about to embark on. One student in particular grabs her attention. Yanis (Liam Pierron), a young man with an interest in working on movie sets, he's smart but beaten down by systematic institutional oppression, both inside and outside of the school. He has given up hope. Will she have enough for the two of them?

"School Life" suffers from bad dubbing into English from its original French, which is a shame because the underlying messages of the importance of education and empathy are heartfelt and not over played. The social messages shine through loud and clear, even if the storytelling is muddied by an abundance of characters and situations. As an ensemble piece, however, "School Life" takes pleasure its variety of characters, exploring their humour and liveliness by way of first time, non-professional actors who bring a naturalism and verve to their roles. Their energy makes up for the bad dubbing and overstuffed After School Special plot.

"School Life" works best when it drops the melodrama and focusses on the characters. The beauty of a scene where one of the students conducts the school "orchestra," a beat machine and a team of recorder players, is in its simplicity and in the obvious joy the students have to be creating something for others to enjoy. That's the beating heart of the story, pride through achievement, encouraged by a teacher who sees the best in her students. It's a simple idea, one we've seen before in inspirational teacher movies like "Good Will Hunting" and "Stand and Deliver," but lifted by the buoyance of the characters.

Biopics are a movie staple. They give us insight to people we'll never meet and bring history to life but there has never been a biography quite like the Matthew Rankin's "The Twentieth Century," coming to VOD this week. A heightened look at the life of Canadian Prime Minister William Lyon Mackenzie King, it's part Dada, part Art Deco and utterly unique.

You didn't learn any of this in Mr. Parker's history class.

Director Matthew Rankin uses a heightened version of his main character's biographical details to craft a satire of Canadian identity and masculinity. Like a Heritage Minute on acid the film details King's campaign. Instead of policy the film pits politicians against one another in "traditional" Canadian pastimes like baby seal clubbing and waiting your turn.

A farce coupled with deep commentary and a heightened yet minimalist style that recalls the films of Guy Maddin by way of German Expressionism, "The Twentieth Century" has timely messages about the dangers of empty political rhetoric and the processes by which we elect our leaders. Rankin casts a wide net here, parodying everything from politics and diffident national outlook to British imperialism and even foot fetishes but does so in a wonderfully surreal way that is equal parts silly and sincere.