Movie reviews: 'Terminator: Dark Fates' is the best in the franchise since 'T2' 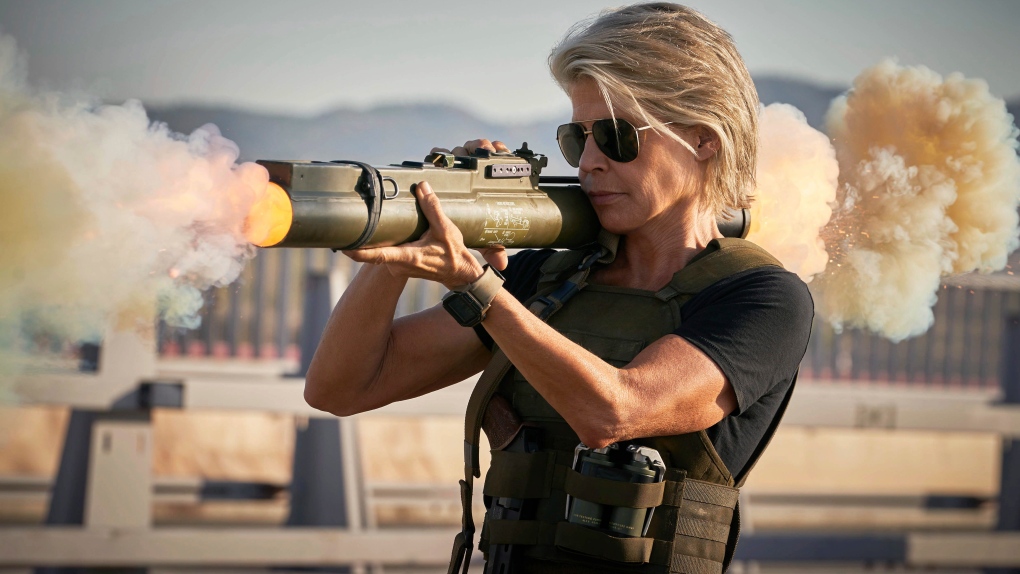 There may be six “Terminator” films but James Cameron would like you to ignore half of them. Cameron, who returns to the producer’s chair after a 28-year gap from the franchise, designed the new movie, “Terminator: Dark Fate,” to be a direct sequel to 1991’s “Terminator 2: Judgment Day.” So, forget about “Terminator 3: Rise of the Machines,” Christian Bale’s meltdown on the set of “Terminator: Salvation,” and “Terminator: Genisys,” they have been relegated to the delete bin.

The time-shifting reset, directed by “Deadpool’s” Tim Miller, dials the way-back machine to the end of “T2.” The tough-as-tacks Sarah Connor (Linda Hamilton), her teenage son John (a mix of actor Jude Collie and CGI to recreate original actor Edward Furlong) and a T-800 Terminator (Arnold Schwarzenegger) have saved the world from a take-over by the artificial neural network Skynet.

Cut to 2022 and a familiar set-up. Dani Ramos (Natalia Reyes) and brother Diego (Diego Boneta) are living quiet, unassuming lives in Mexico City when—wait for it—a shape-shifting Rev-9 “My whole body's a weapon” Terminator (Gabriel Luna), is sent from the future to eliminate Dani before she can become a threat to the Legion Machine Network. “Two days ago, I had this nice, simple life,” Dani says. “And now it's a nightmare.”

Her survival depends on two warriors, Grace (Mackenzie Davis), a time-traveling augmented soldier and Connor, the original Terminator butt kicker. “I hunt Terminators and I drink till I pass out,” she says.

Along the way they meet Carl (a salt-and-pepper Schwarzenegger), a retired T-800 "Model 101" who left Skynet behind to integrate into human society. He found his humanity, married a human, raised a stepchild but is brought back into the fold to battle against the new Terminator, even though he is a Commodore 64 compared to Rev-9’s quantum computer.

“Terminator: Dark Fate” feels familiar. The basic plot holds true to the classic original. The time travel, the protective force, the relentless evil, are time-honoured tropes that date back 35 years. Grace is even a cinematic echo of Kyle Reese and there are not one, but two riffs on the famous, “I’ll be back” line. Director Miller and a long list of screenwriters including David S. Goyer and Billy Ray keep things current with references to undocumented immigration between Mexico and the United States and diverse and gender-blind casting but by the time the end credits roll it feels like we’ve been down this road before.

The main difference between then and now is the special effects. The original “Terminator” was a low-budget beauty that focused on story telling over wild effects. “T2” was more advanced but now our eye is accustomed to the kind of superhero CGI that allows Rev-9 to liquify and reconstitute. It doesn’t shock or charm, it just is. The Terminator characters must have remarkable capabilities but his gooey reformations don’t have the impact of the cool T-1000 liquid metal sequences.

Miller provides the kind of big set pieces we expect, wild car chases, and helicopter stunts but the interesting stuff lies in the characters. It’s fun to have Hamilton back as Connor. She’s snaps off one liners with ease and re-establishes her place as an action icon one bazooka shot at a time.

Schwarzenegger returns with a new twist on his famous cyborg character. He still weighs four hundred pounds and can punch his way through metal doors, but he’s discovered his human side. He gets a few laughs, provides some old-school heavy metal action but there’s a twinkle in his LED eye that hasn’t been there in past Terminator movies.

By not straying far from the roots of the franchise, “Terminator: Dark Fate” is the best “Terminator” movie since “T2” but feels more like a chance at setting up a new batch of sequels than a rebirth of the story.

American abolitionist and political activist Harriet Tubman led an extraordinary life. Born into slavery, she transcended, escaping to freedom before being a conductor on the Underground Railroad and rescuing 70 enslaved people, including her closest relatives. “Harriet” starring Cynthia Erivo in the title role, details her legendary life in a formulaic film that nonetheless inspires.

Set in Maryland, “Harriet” begins in 1849 with Minty (Erivo)—she didn’t take the name Harriet Tubman until later—leaving behind everything she knew, family, friends, her husband John Tubman (Zackary Momoh) to escape the violence and oppression of a land owner who refuses to honour a deal to give her the freedom she deserves. “I’m going to be free or die,” she says as she embarks on an arduous journey across unfriend territory with a team of slave trackers trailing behind. With ingenuity and some divine guidance she makes it 160 kilometres to Pennsylvania, freedom and the helpful hands of William Still (Leslie Odom Jr.), abolitionist and one of the architects of the network of secret roads and safe houses that became the Underground Railroad, the escape route many enslaved African-Americans used to access the free states and Canada. He helps her get established but after a year Harriet feels that freedom without family is an empty experience. “If I’m free,” she says, “my family should be too. I made up my mind, I’m going back.”

That marked the first of many danger-filled journeys that saw Harriet, sometimes in disguise, sometimes carrying a gun, always equipped with courage and resourcefulness, lead dozens of people to freedom.

“Harriet” sometimes falls into overused thriller conventions but the career-making performance from Erivo, who displays a range that spans the absolute hands-in-the-air joy at crossing the border to autonomy to the steely determination when facing down her former oppressor, masks some of the uneven storytelling. Sudden shifts in tone, from harrowing to light, are jarring but the sheer force of Tubman’s personality (and Erivo’s performance) smooth out the rough spots.

Director and co-writer Kasi Lemmons fills the story with vivid details that evoke the time and place. The use of coded songs as a way to communicate is one particularly effective note that weaves tradition into the movie.

“Harriet” is a historical origin story that, for better and for worse, echoes the superhero origin tales we’ve seen so much of recently. It’s appropriate. Tubman was a real superhero. She is the stuff of legend, a woman who risked everything to fight against a fundamental, moral wrong. The movie that celebrates her life occasionally errs in its excess—it covers a great deal of ground—but the light it shines on Tubman and her accomplishments burns brightly.

Norton, wrote, produced, directed and also stars as Lionel Essrog, a gumshoe with Tourette Syndrome and an obsessive-compulsive eye for the little details that solve cases. “It’s like I got glass in my brain,” he says. When Frank Minna (Bruce Willis), his mentor and only friend, is killed while investigating a case no one is surprised. His colleagues, Tony (Bobby Cannavale), Gilbert (Ethan Suplee) and Danny (Dallas Roberts), accept that death is an almost inevitable part of the job but Lionel thinks there is more to the story. He is convinced Frank was about to blow the lid off a conspiracy involving Moses Randolph (Alec Baldwin), a ruthless politician who clears out African-American communities to make way for redevelopment. “There's something going down,” says Lionel, “and it's big, and they were not happy about what he found.” His sleuthing leads him to Randolph’s hinky brother (Willem Dafoe), community activist Laura Rose (Gugu Mbatha-Raw), and a tale of corruption, lust and power where everyone is at risk.

Norton has created a detailed noir with “Motherless Brooklyn” that, while engaging, overstays its welcome in a long, drawn out conclusion. Terrific performances (there is some capitol A acting happening here), effective dialogue and anxiety-inducing music plus great 1950s era flourishes (even if Baldwin does smoke a recent vintage American Spirit cigarette in close up) entertain the eyes and ears but as Lionel uncovers clues we are drawn further into a rabbit hole of murky motives, many of which are left dangling by the time the end credits roll. It’s an ambitious movie that feels meandering and overstuffed with plot.

It does, however, have its high notes. Norton is careful in his portrayal of a person with Tourettes and while he may have an extreme case of the syndrome it is never used as a gag or a gimmick. Instead it’s a sympathetic representation of a person with neurological tics making his way through life.

As for Baldwin, it’s hard to not see echoes of his Donald Trump impression in Moses Randolph. He’s an aggressive anything-to-win type who plays the power game to the disadvantage of anyone who gets in his way. It’s a big, blustery performance and one of the film’s pleasures.

Gugu Mbatha-Raw brings both vulnerability and steel to Laura, elevating her from a plot device to a living, breathing character.

“Motherless Brooklyn” is frustrating. It contains many interesting, thought provoking ideas on gentrification, some nicely rendered scenes and fine acting but errs on the side of self-indulgence to the point where the audience loses interest in its machinations.