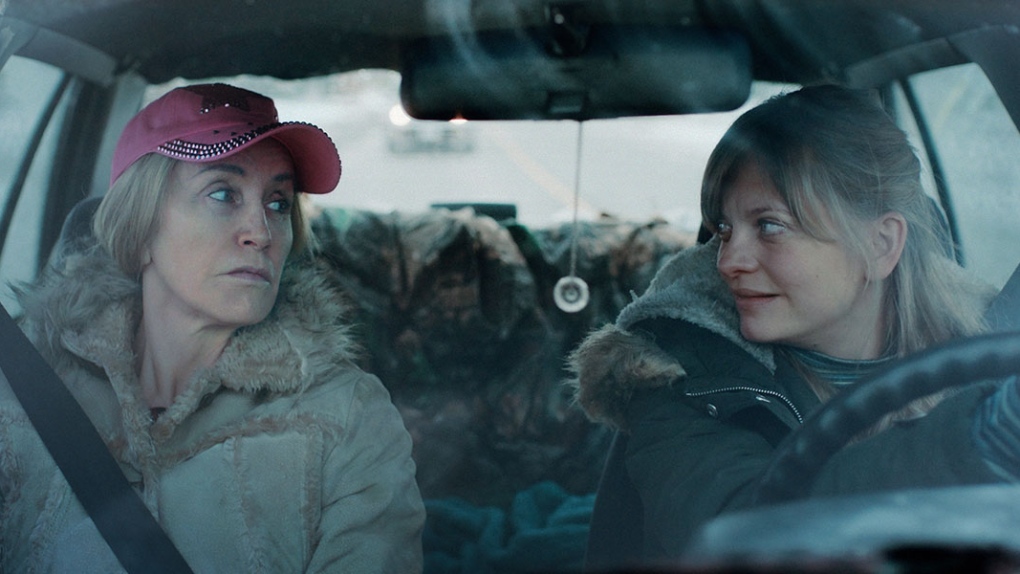 At the bar Tammy (Felicity Huffman) is what's known as a character. "I'm not a good person," she says. "I'm a good time." She's always the life of the party, with a drink in her hand and a quip on her lips. When she's too broke to afford booze she's making her daughter Kathy's (Anastasia Phillips) life miserable. Every month, when the money from her welfare cheque has run dry, Tammy goes through the same charade of marching down to the local bridge with the intention of ending it all. Kathy inevitably comes to the rescue and life goes on, repeating the cycle day in and out.

Kathy's only respite from her mother's lifestyle is a game of make believe she plays with her boss and old family friend, Doug (Clark Johnson). The two get dolled up, head to a fancy city bar and role play, pretending to be other, happier people. Their friendly bartender Jamie (Kristian Bruun) is in on the joke, and always goes along for the ride.

Just when it seems that Kathy is able to step away from the shadow of her mother's influence, Tammy is diagnosed with terminal cancer. As a caregiver she's drawn back into Tammy's chaotic orbit but salvation may be around the corner. Television host Gordon Baker (Ali Hassan), a mix-and-match of Jerry Springer and Dr. Phil, is interested in the trashy aspects of Kathy's story, and if she tells it well enough — with tears and all — he's willing to make it worth her while.

"Tammy's Always Dying" is a compelling character study anchored by remarkable performances. Huffman, almost unrecognizable as the narcissistic title character, makes sure that Tammy isn't just a drunken spectacle, staggering through the film with a cigarette in one hand and a drink in the other. She brings humanity to a character who could have been a foul-mouthed Foster Brooks style caricature. As Kathy, Phillips finds the balance between heartfelt love for her mother and hatred for the way she has been treated. It's a tricky balance but Phillips finds it in a carefully calibrated performance that generates much sympathy as Kathy carves a future for herself despite dire circumstances.

It's not all doom and gloom. Bruun and Johnson provide a respite from the misery, giving the film two characters who try and improve Kathy's life without controlling her.

The very best zombie movies are never simply about the dead coming back to life. Sure, the good ones smear the screen with buckets of blood but just as important as the gore are the brains, and not just the kind the undead use as entrees. The memorable ones use the flesh-hungry creatures as metaphors for societal ills. George A. Romero knew this and infused his movies with allegories to social justice and consumerism, among other issues. Director Jeff Barnaby knows this as well. His exciting new zombie film, "Blood Quantum," new to VOD this week, contains a powerful central premise: Indigenous people put in danger by allowing white folks on their land.

The film begins with an ancient settler's proverb. "Take heed to thyself, make no treaty with the inhabitants of the land you are entering." It's a portentous warning that foreshadows "Blood Quantum" action. Set on an isolated Mi'gmaq reserve called Red Crow, it takes place before, during and after a plague that has turned most of the world into bloodthirsty zombies. The Red Crow, however, are immune, placing tribal sheriff Traylor ("Fear the Walking Dead's" Michael Greyeyes) in the position of having to protect the reserve, including ex-wife Joss (Elle-Máijá Tailfeathers), sons Lysol (Kiowa Gordon) and Joseph (Forrest Goodluck), Joseph's pregnant girlfriend Charlie (Olivia Scriven) and father Gisigu (Stonehorse Lone Goeman), from hordes of undead outsiders.

"Blood Quantum" offers up the blood and guts you expects from a movie like this but director Barnaby also infuses every frame with a vivid sense of indigenous heritage. From the title — which refers to a much-despised colonial blood measurement system used to establish a person's Indigenous status — to using a zombie apocalypse as metaphor for the fight against annihilation by colonial settlers, it drips with social awareness and gore.

A new take on the zombie apocalypse tale, it brings a fresh perspective to a much-examined genre. The characters are well defined and have emotional arcs amid the madness and skull crushing. The use of occasional animation sections adds visual interest to an already cool looking film — Barnaby has a deadly eye for composition — and will even make you laugh from time to time. A broken narrative timeline doesn't work as well it should but Barnaby and Co. deliver on entertainment and intellectual levels.

A remake of David Cronenberg's lurid, low-budget 1977 body-horror chiller, "Rabid" comes to VOD in the middle of a pandemic with the story of a disease spread by human contact.

Laura Vandervoort is Rose, an "ugly duckling" fashion designer working for the Zoolander-esque Gunter (Mackenzie Gray). When he isn't belittling her work, her cocaine-snorting colleagues Bev and Ellie (played co-writers and directors Bev and Ellie Soska) treat her with disdain. Even her BFF, a model named Chelsea (Hanneke Talbot) barely rises to the real definition of the word friend. One night, after an incident at a nightclub Rose is involved in a terrible motorcycle accident. In the hospital she is covered in bandages, suffering from internal trauma and disfiguring damage to her face. Her only hope at returning to normal life is an experimental treatment from Dr. William Burroughs (Ted Atherton), a megalomaniacal surgeon whose stem-cell procedures are just slightly outside the boundaries of accepted science.

The surgery is a success and this time when she takes off the bandages she is met with an idealized version of her face. She is no longer an ugly duckling and with her new image comes a new, highly confident attitude. The people at the design studio now take her work seriously and the velvet ropes of nightclubs, barricades that once kept her on the outside, suddenly disappear.

On the downside, the procedure has left her with a vampiric lust for blood and soon she is feasting on the innards of nightclubber Billy (CM Punk) and soap opera star Dominic (Stephen Huszar). Each time she feeds, she also spreads a deadly strain of rabies, raising fears of a widespread outbreak of virus villainy.

"Rabid" works best when it lets itself go. There are some outrageous and gruesome special effects — a fight between an aging soap opera star and a younger rival is ferocious, fearless and bloody good fun — but that sense of unpredictability and savagery doesn't translate to the rest of the film. It's a shame because a sharper edge would have helped "Rabid" become its own thing and not simply a remake of an older, much-loved horror movie.

The Toronto restaurant helmed by Chef Daniel (Aaron Abrams) in the movie "Nose to Tail" is a lovely, high end bistro that promises good service and even better food. It looks effortless, like a swan drifting elegantly on a lake. It may feel calm in the front of house but the restaurant, like the swan, is paddling like hell to stay afloat.

Written and directed by first-timer Jesse Zigelstein, "Nose to Tail" takes place over the course of one crisis filled day. Waking up hung-over in his cramped downstairs office, Daniel begins planning a special meal for a VIP table of investors who, if impressed, might provide the financial lifeline the restaurant needs to survive. Before dinner service begins, however, he must deal with an unhappy landlord, a disappointed ex-wife and the loss of a sous-chef. Also, like flies buzzing around a rotten piece of meat, there's a food truck across the street that may be siphoning Daniel's customers and an annoying food blogger who seems to know more about the state of Daniel's restaurant than Daniel does.

"Nose to Tail's" isn't likely to debut on the Food Network's Movie Night. A portrait of a narcissistic chef, driven by ego, alcohol and pure rage, it shows more of the reality of restaurant life than any celebrity chef reality show. He's an anti-hero, a person who wields his talent and reputation like a sword, to sleep with his hostess or treat his proteges in the kitchen like servants, but he's also compelling. He may be the architect of his own demise but Abrams keeps the audience on side. He incorrigible but there is always a lingering sense that his often-irredeemable behavior is born out of a sense of failure, not power. He was once a hotshot, an up-and-comer, but now is being left behind and it has crushed him. Abrams gives him layers. He's not likable but he's also not simply a self-loathing Gordon Ramsey "Hell's Kitchen" stereotype either.

"nose to Tail" occasionally feels overstuffed with complications — Daniel is having a VERY bad day — but its determination to not smooth out Daniel's rough edges makers it worth a look.