Movie reviews: 'Stuber' has fun taking the buddy cop wheel for a spin 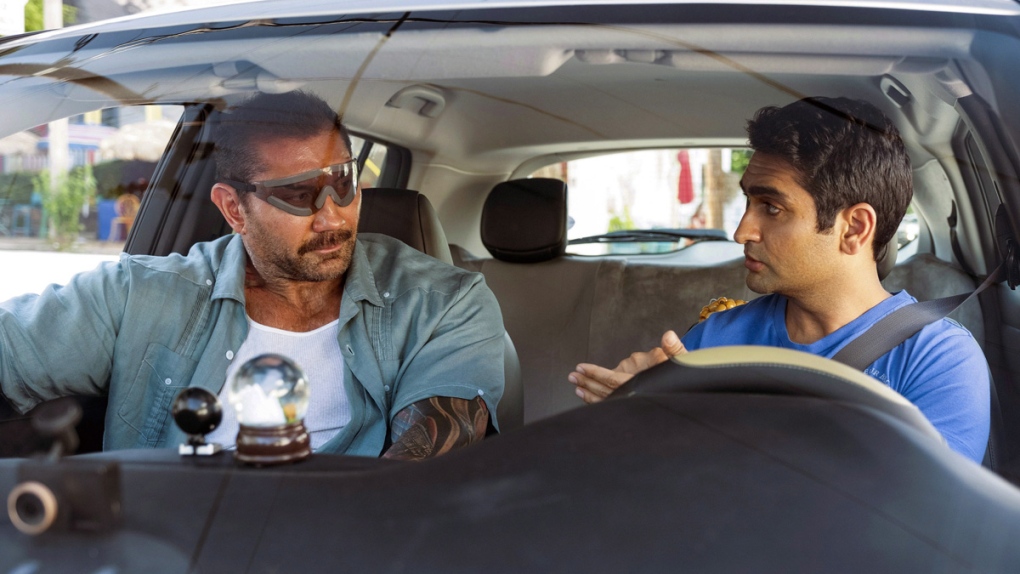 I recently had a conversation with someone who hires people to work at a large financial institution. Qualifications? Math and people skills are high on the list, as are attention to detail and honesty. His killer question, the one that separates the candidates who will move forward to a second or third interview from those who won't is deceptively simple. "What's your Uber rating?" That's right, in a word that increasingly places a star value on random performance, a ride-sharing service driver you may have only met once can determine your employment future. "Stuber," a new comedy starring Kumail Nanjiani and Dave Bautista, begins with a star rating and ends in an odd couple comedy.

Bautista is Vic, an LAPD detective on a mission to capture Teijo (Iko Uwais), the heroin dealer responsible for the death of his partner Sara Morris (Karen Gillan). When Teijo resurfaces during a Los Angeles heat wave Vic prepares to take him down. Trouble is, he's just had Lasik surgery and can't see. Fortunately, his daughter Nicole (Natalie Morales) installed the Uber app on his phone.

Enter Stu (Nanjiani), a sardonic retail clerk, with a crush on his best friend Becca (Betty Gilpin), a part time job driving for Uber and a license plate that reads FIVESTARS. Ironically, he also has a comically low star rating, the result of a string of one-star reviews left by drunks and racists. "I can't drop below four stars or I'll lose my job," he says.

He picks up Vic, takes him to the scene of a murder and, desperate for a five-star review hangs around, getting deeper and deeper into trouble. "If you want five stars," says Vic, "keep the motor running."

"Stuber" is more than just product placement for ride-sharing. Equal parts action and gags, it feels like a throwback to the odd couple buddy movies of yore.

Let's play Retro Fantasy Casting. Imagine it's 1985. You have an action-comedy about a hulking cop and a motor-mouthed cab driver. It's violent, rough and raunchy. Sounds perfect for Arnold Schwarzenegger and Eddie Murphy. You get the idea.

The premise is as dated as Koosh Balls but like those colourful rubber balls, it's still fun. Arnold and Eddie likely would have dialed back the pop psychology somewhat — "You give people your Glock," says Stu, "not your love. That's your problem." — and upped the grit, but the other buddy movie puzzle pieces are very much in place.

These movies are all about chemistry and Bautista and Nanjiani bring it. Physically they're Laurel and (a pumped up) Hardy and their size differential leads to some laughs. Bautista's Mr. Magoo routine offers up some good opportunities for pratfalls, but it is Nanjiani who really provides the comedy in this action-comedy. His is a steady comedic approach, with a dryly hilarious delivery that wrings laughs out of lines that aren't funny on the page. "I've done things tonight you wouldn't believe," is a standard line in movies like this but out of Nanjiani's mouth it becomes a laugh line.

"Stuber" doesn't reinvent buddy cop wheel but it does take it out for a spin and it's a fun ride.

The name Marianne Ihlen may not ring a bell on its own but mention Leonard Cohen in the same sentence and melancholic strains of one of the poet's biggest hits floods the ears. She inspired two of his most famous songs, "So Long, Marianne" and "Bird on a Wire" and was the woman who "held on to me like I was a crucifix as we went kneeling through the dark." A new documentary, "Marianne & Leonard: Words of Love," paints a more complete picture of a person often thought of as Cohen's muse.

Their story begins on Hydra in 1960, a place where artists could survive on little money. Ihlen, fresh off a divorce from mercurial writer Axel Jensen and raising a child on the Greek isle when she met Cohen, a down-on-his-heels poet looking for inspiration. They fell in love, did drugs and searched for inspiration. Cohen wrote feverishly, penning his novel "Beautiful Losers" there. Today the book is considered a classic but at the time it was met with derision -- Robert Fulford it, "the most revolting book ever written in Canada" -- and failed at bookstores.

To make money Cohen and Ihlen returned to North America to begin his career as a songwriter. Folk singer Judy Collins, who recorded his song "Suzanne" a full year before he released his own version and convinced him to sing on stage. Cohen's sophistication and romantic balladry caught on and soon he was a star, much to Ihlen's disdain. Feeling left behind she wrote a letter to Collins, rebuking the singer for covering Leonard's songs and "ruining her life."

When they parted. After seven years, Cohen was on his way to becoming a superstar, Ihlen returned to a more normal life, largely fading from public view. Using archival footage — home movies shot on Hydra, news footage and photography coupled with new interviews — director Nick Broomfield stresses the importance of Ihlen in Cohen's life. Broomfeild himself is an Ihlen disciple. They met on Hydra and she helped him find his vocation as a documentary filmmaker. He returns the favour with a loving portrait of a woman who served as an almost mythical figure, a muse. Overshadowed by the artists she inspired she is nonetheless well served by the documentary which gives dimension to a person best known as a song lyric.

Ihlen passed away in Oslo in July, 2016. At the end of her life Cohen sent a message, read to her bedside and seen in the film. "Know that I am so close behind you that if you stretch out your hand, I think you can reach mine," it reads in part. "Endless love, see you down the road." Four months later he too was gone, joined in death as he had been in life with his muse. "Marianne & Leonard: Words of Love" is a sensitive and intimate portrayal of their time together, a love story that only spanned a handful of years but resonated for decades.

"Maiden" is one of those sports documentaries that does not require you to be a fan of the sport to enjoy the film. Ostensibly the subject is a sailing competition called the Whitbread Round the World Race but the true topic is the tenacity of the boundary breaking all-female crew of the 58-foot aluminum ocean racing yacht Maiden.

"Maiden" begins with 24-year-old Tracy Edwards, a British woman who dreamed of being a ballet dancer but changed gears while on a backpacking trip in Greece. Taking a job as a stewardess on a yacht, she met King Hussein I of Jordan (more on that later) and fell in love with the seagoing life and the "dropouts, misfits, gypsies and nomads" who worked on the boats. In 1986 she secured a job as a yacht cook in a Whitbread race. There she discovered the gender imbalance and sexism of the competitive sailing world that would inspire her to refinance her house and, with some help from her old friend King Hussein, buy a second-hand 10-year-old yacht which she refurbished and renamed Maiden. In 1989 Edwards and her all-female crew set forth from Southampton for Uruguay and into the history books. "We were doing something we had been told we couldn't do and we did it anyway."

Using a combo of new interviews and contemporaneous news footage director Alex Holmes weaves together a true story of teamwork, mettle and determination. Detailed is the inherent danger — "The ocean is always trying to kill you," Edwards says. "It never takes a break." — and all the drama that comes with a groundbreaking effort like this. The most compelling part of the doc is the sheer grit Edwards, who would later become the first female British Yachtsman of the Year, and her crew display.

It's not all smooth sailing, however. In the early footage Edwards is a determined, sometimes divisive character with self-destructive tendencies but the personality clashes pale compared to problems with the weather, equipment malfunctions and the death of a competitor.

"Maiden" also presents a detailed account of the dismissive sexism of the press who covered the race. Even before the Whitbread began Edwards was asked by an interviewer, "How do you get this kind of money out of business men when you are this young slip of a girl?" and summarily dismissed by yacht reporters. Nonetheless they persevered, made history and more than fulfilled Edwards' dream of being "a proper sailor."