This image released by Lionsgate shows Chris Rock in a scene from "Spiral: From the Book of Saw." (Brooke Palmer/Lionsgate via AP)

“And Justice for All,” the last four words of the American Pledge of Allegiance, sum up the dynamic of “Spiral: From the Book of ‘Saw,'” the ninth instalment of the “Saw” franchise, now playing in theatres.

On one hand you have a murderer dispensing their own brand of justice; inventively slaughtering people who have broken a twisted moral code known only to the killer. For instance, a detective who has lied on the stand many times, is given the choice, provide justice by tearing out his own lying tongue, or be killed. “Live or die. Make your choice.”

Then, there are the police who must use more traditional means to enforce their brand of justice.

It might not be exactly what Congress had in mind, but in the “Saw” universe there is more than one definition of the word justice.

Chris Rock is Zeke Banks, an idealistic-but-disillusioned big city detective trying to get out from under the shadow of his father Marcus (Samuel L. Jackson), a decorated, hero cop and retired police chief. When Zeke and his partner, an eager rookie named William Shenk (Max Minghella), catch an unusual, grisly case, the game is afoot.

A new serial killer, playing from the same gamebook as the notorious villain Jigsaw, who put his victims through deadly scenarios he referred to as "games" or "tests,” is terrorizing the city’s dirty cops, looking to avenge wrongs perpetrated by the South Metro Police and “reform” the department. “A Jigsaw copycat,” says Marcus. “That could be difficult.”

As the bodies pile up Zeke suspects the killer isn’t just playing around, that he has another motive. Something personal.

After eight instalments of the “Saw” franchise, countless deadly traps and one iconic baddie, “Spiral” finds a newish way in to tell an old story. Billy the Puppet and Jigsaw are gone, as is much of the gore that splattered the screen in earlier incarnations of the series. They’ve been replaced with a timely but underdeveloped subtext regarding police corruption and the addition of humor, an element often sorely lacking from previous instalments.

Directed by Darren Lynn Bousman, who helmed the second, third and fourth “Saw” movies, “Spiral” is as character based as it is consequence based. Bousman, and “Jigsaw” screenwriters Josh Stolberg and Pete Goldfinger, have dialed back the grim stuff. There are still enough traps and gore to keep “Saw” purists happy—there’s a finger ripping machine and some nasty hot wax—but an increased emphasis on character raises the stakes so the gory stuff has more impact. It’s still a horror film, but Bousman structures it like a thriller, even if his reliance on flashbacks and exposition mutes some of the thrills.

The spiral logo that gives the movie its name is supposed to be emblematic of change and progress, but the movie doesn’t quite live up to the symbol’s meaning. It shakes some of the dust off the old franchise without reinventing it or doing justice to it.

THE WOMAN IN THE WINDOW: 3 STARS 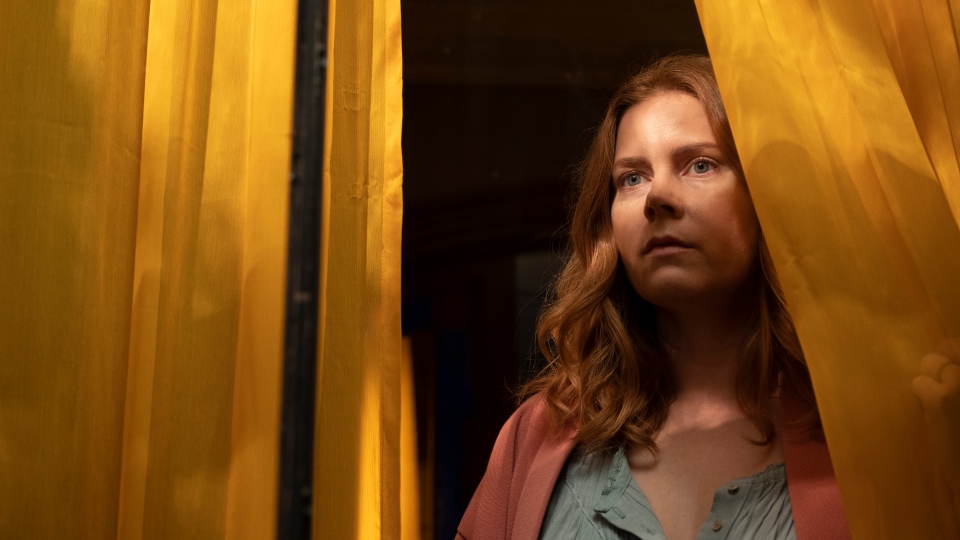 In adapting “The Woman in the Window,” a new thriller starring Amy Adams and now streaming on Netflix, director Joe Wright borrows liberally from the Hitchcock playbook, paying visual tribute to everything from “Foreign Correspondent” and “Psycho,” to “Vertigo” and, of course, “Rear Window.” There are so many Hitch lifts in the look of the movie it makes Brian DePalma’s myriad Hitchcock homages look like petty thievery.

Adams plays child psychologist Anna Fox who lives alone in a rambling brownstone on 124th Street in Manhattan. Agoraphobic, she gets panic attacks at the idea of going outside, let alone actually stepping over her front threshold into the big, bad world. Her only regular contact with the outside comes with her weekly visit from her therapist (Tracy Letts) and a downstairs tenant (Wyatt Russell).

When her new neighbours from across the street drop by unexpectedly, she reluctantly lets teenager Ethan (Fred Hechinger) in for a get-to-know-you visit. A day or so later Jane (Julianne Moore) swings by to chat, ask nosy questions and have a glass of wine.

After the visits, Anna becomes voyeuristically invested in their lives, watching them from the safety of her apartment as they go about their daily lives, exposed by two large windows that display their living areas.

One night, after mixing wine with her anxiety medication, she witnesses what appears to be an ugly domestic dispute that turns fatal. Trouble is, no one believes the “drunken, pill popping, cat lady.”

Question is, did she really witness a murder or was it a hallucination?

Anna is a classic, unreliable narrator, a character whose credibility is questioned at every step of the way. Adams keeps her interesting, bringing a human face to trauma, anxiety and grief. We are never sure if what we’re seeing is filtered through a haze of medication or actually happening, and while Wright finds flashy visual ways to portray this, it is Adams who connects emotionally.

There are moments of super-charged filmmaking in “The Woman in the Window,” but the tonal shifts and pacing get in the way of making this edge-of-your-seat viewing. Director Joe Wright brings his trademark visual style to illustrate Anna’s anxiety. Unusual angles and lurid colours illustrate Anna’s disconnected moments, wide shots of her empty apartment represent her isolation. It’s effectively and inventively done, but the slack pacing sucks much of the energy out of the storytelling.

“The Woman in the Window” has moments that truly work, but it is dulled by its deliberate pace, repetitive nature and typical confessional ending. 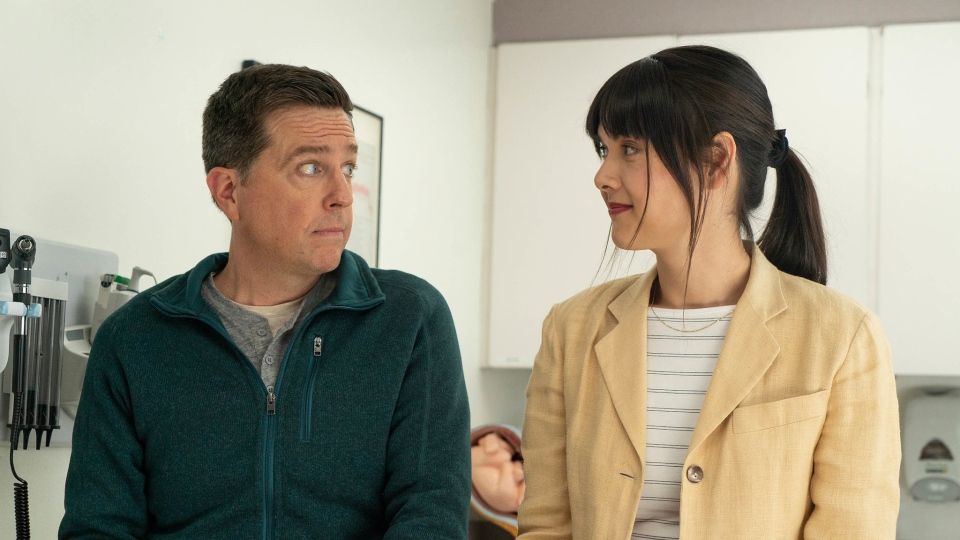 If I was to categorize “Together Together,” a new movie starring Ed Helms and now on V.O.D., I guess I’d have to create a new category, the non rom-com. It’s a relationship comedy that has some, but not all, of the hallmarks of a romantic comedy, yet still walks its own path.

Helms is Matt, a 45-year-old single man who wants to start a family. When we first meet him, he is awkwardly interviewing 26-year-old millennial Anna (Patti Harrison) for the job of surrogate. She has snappy answers to his questions -- Have you ever stolen anything? -- and gets the job. Matt is eager to begin his new life as a single dad, but Anna, who gave a baby up for adoption years before, sees it as a gig -- a transaction with a $15,000 fee.

Divided into trimesters, as the story unfolds Matt and Anna’s relationship grows. They share meals, watch “Friends,” which she has never seen, and take prenatal classes together. They even attend a kind of couple’s therapy, even though their relationship isn’t romantic; it’s more complicated than that. They aren’t a couple, but their relationship is intimate on many levels and it leads to misunderstandings that threaten their personal and business relationship.

“Together Together” often feels like it is turning the corner to becoming a Hollywood rom-com and then, just as often, does a U-turn. It constantly defies the traditional romantic comedy journey, while allowing the characters to have an interesting connection.

Writer/director Nikole Beckwith has crafted a movie about a platonic relationship between a man and a woman, fringed with humour, melancholy and warmth. Helms brings his trademark nerdy awkwardness to the role, expertly playing off Harrison’s more sardonic take on Anna. They are a compelling couple, even if they’re not actually a couple.

“Together Together” is a different take on “When Harry Met Sally,” providing an updated and rather sweet answer to that movie’s famous query, “Can men and women be friends or does sex always get in the way?”

IN THE EARTH: 3 STARS 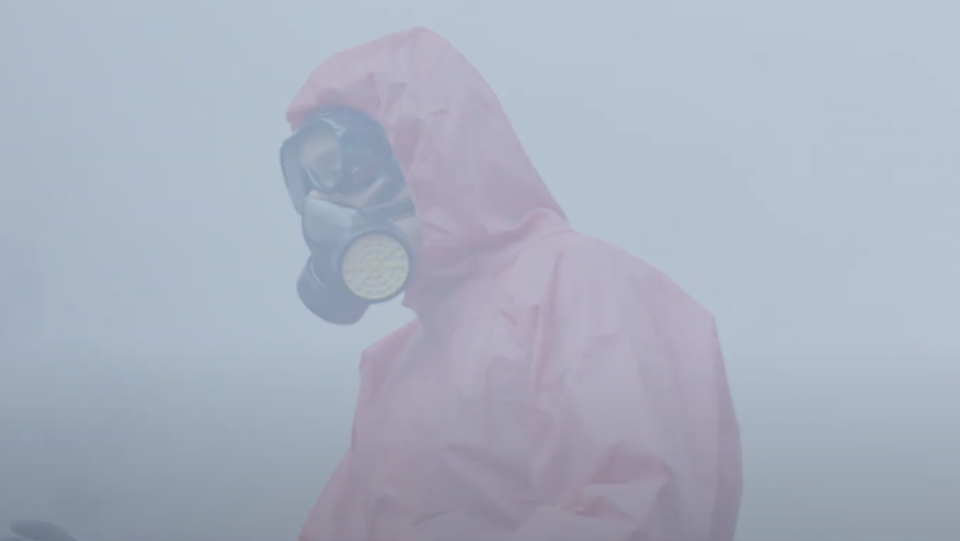 “In the Earth,” the latest film from Ben Wheatley, now on VOD, once again returns to the psychological horror that fueled his other movies like “Kill List” and “A Field in England,” with a hint of the social commentary of his J. G. Ballard adaptation “High-Rise.” Add to that a dash of folk-horror and you have a truly timely and mind-bending film that is best avoided by the squeamish.

Most people see a walk in the woods as a quiet respite from the world. But when researcher Martin (Joel Fry) and ranger Alma (Ellora Torchia) head out to meet scientist Dr. Olivia Wendle (Hayley Squires) to perform some tests in the forest during a pandemic, they are sent off with some ominous advice. “People get a bit funny in the woods sometimes,” says Martin’s doctor Frank (Mark Monero). “It’s a hostile environment.”

Sure enough, things go wrong early on. They come across eerie, abandoned campsites, equipment breaks down, Martin becomes ill and they are even attacked in their tent on a tense, sleepless night. The next day help comes in the form of Zach (Reece Shearsmith), an eccentric loner who lives deep in the woods. He offers some painful, but much-needed help --this is roughly where the squeamish may want to go make a sandwich and read a book -- but soon begins acting erratically with a mix of metaphysical ramblings and homicidal tendencies.

By the time they contact Dr. Wendle, it is unclear who they can trust as their journey into the heart of darkness takes on an increasingly mysterious, psychedelic tone.

“In the Earth” is a trippy movie that nonetheless feels earthbound. No matter how weird the going gets, and it does get strange, masks, isolation, HazMat suits and talk of quarantine and being outside for the first time in forever, ground the story in all too familiar terms. The post-apocalyptic vibe is all too real, but the Pagan alchemist rituals, evil spirits and a dollop of paranoia provide the journey into the heart of darkness and the absurdist comedy integral to Wheatley’s style.

Some will call “In the Earth” a horror film, but it isn’t really. The repeated home surgery scenes are woozy-making, and the strobe effects are unsettling, but your pulse will never quicken. Then there’s the under developed characters. You may feel sorry for them when weird things happen, but it’s hard to be invested in them.

What that leaves you with is a movie that offers up a handful of ambitious notions about science versus religion and some extra ghastly visuals but, at best, it is about intellectual dread; all ideas and no emotion.