Movie reviews: 'Red Rover' a quirky story that could have been overcome by its whimsy 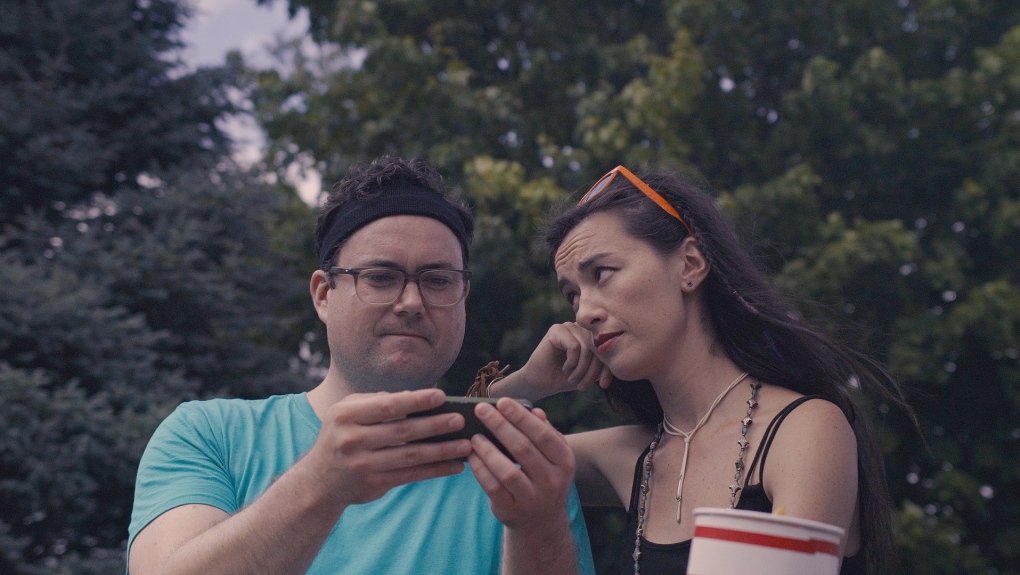 Damon (Kristian Bruun) and Phoebe (Cara Gee) are seen in a scene from the film "Red Rover." (Red Rover) 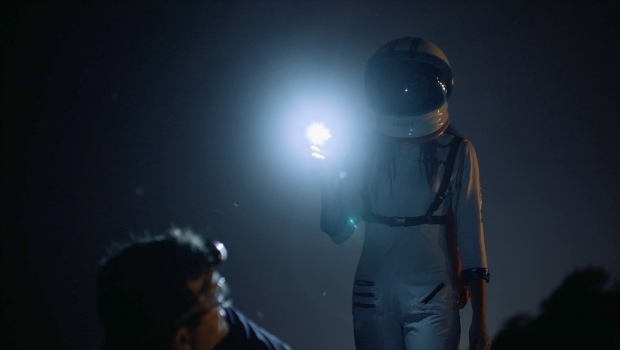 "Red Rover" is a coming-of-middle-age story.

"Orphan Black's" Kristian Bruun is Damon, a man cut adrift from most of the things that kept him grounded. He's an unemployed geologist whose former business partner always refers to his achievements in the past tense. "Once, you were an asset to the company." He shares a home with his ex-wife (Meghan Heffern) and her new, obnoxious boyfriend who treats Damon like a lodger, not the actual owner of the house.

The only thing missing are track marks on his back from everyone walking all over him.

His life is stuck in low gear until he meets Phoebe (Cara Gee), an indie musician and promoter of a new reality show. Called "Red Rover," it's part science experiment, part entertainment, backed by a billionaire who wants to send a manned capsule to Mars. For Damon, it seems like the perfect escape, a way to leave his Earthbound problems behind.

"Red Rover" is a portrait of a no-hoper with limited prospects, gilded with a shiny rom-com veneer. It's Bruun's central performance that keeps the story from becoming too maudlin or too farfetched. Even as he dreams of going to Mars, Bruun keeps Damon terrestrial. In his hands, Damon's aspirations don't feel like a pipe dream but more like a map for a way out of a directionless life.

As he slowly regains his mojo it becomes clear that whether his endgame is a new home on Mars or a new life in a new town with a new person, it's all the same. Bruun humanizes and makes you root for a character who could have been easy to dismiss.

"Red Rover" is a quirky story that could have been overcome by its whimsy, but is rescued by actors who make their characters more than caricatures of a man in mid-life crisis or the Manic Pixie Dream Girl.

CASTLE IN THE GROUND: 3 ½ STARS 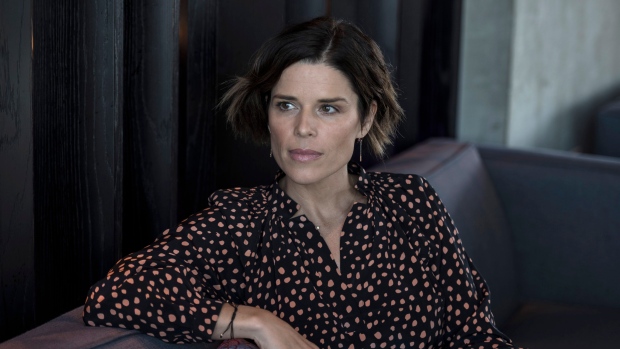 In "Castle in the Ground," a new opioid drama now on VOD, the more Ana (Imogen Poots) says, "Everything is going to be OK," the more it becomes apparent that it's not.

Set in Sudbury, Ontario, circa 2012, the film stars Alex Wolff as Henry, a young man nursing his mother (Neve Campbell) through the final stages of Non-Hodgkin's lymphoma. Across the hall is neighbour Ana, a young woman struggling to pull herself out of the pit of addiction. When Henry's mother dies, Ana and the grieving son are drawn together, but this isn't a mother and son sickness of the week story or a Bukowskian tale of rough romance. It's a co-dependency thriller set against a backdrop of Ana's plan to rip off her dealer Polo Boy (Keir Gilchrist). Henry is drawn into the scheme and a life of opioid addiction.

"Castle in the Ground" is a carefully crafted character study of a naive — or willfully ignorant — man and a Machiavellian addict. Wolff, who impressed in Ari Aster's "Heredity," holds the screen during director Joey Klein's long, unhurried scenes. He brings the hurt of a heartbroken guy, now looking for a connection, even if it isn't in his best interest. But it is Poots who impresses. Her take on Ana is vividly painted as she plays a cat-and-mouse game with Henry in order to get what she wants. As the situation spirals, her chirpy "everything is going to be OK" assurances become more ominous.

This is a depressing film, unburdened by light at the end of the tunnel. Dark, visually and thematically, it's a movie about internal conflict, pain, depression and indulgence that spares none of its characters. Everyone, no matter how sympathetic, are complicit in the lead-up to the film's fiery climax.

"Castle in the Ground" is an up-close-and-personal look at a very large issue. It offers no solutions or searing insight as to how the opioid problem spun so far out of control. Instead, it is simply a well-made and well-acted look at life in a time of personal crisis.

Set in 1992, "Porno" mostly takes place inside a small-town theatre staffed by four teenagers who begin their shift with a prayer circle. On a night off they're offered the chance to screen one of the theatre's two wholesome offerings, "Encino Man" or "A League of Their Own" after hours. Instead of watching Pauly Shore or Tom Hanks they end up chasing a disheveled old man (Peter Reznikoff), who appears to have broken in, around the place. He leads them to a hole in the wall and a treasure trove of mysterious old film reels. One of them, bound in a leather case and stamped with a peculiar symbol, tempts them. Minutes after threading it into the projector the screen is filled with images unlike anything they've ever seen before. Ritualistic violence, nudity, a boatload of blood. "Is this what all pornography is like?" they wonder.

They find out that the movie they watched wasn't pornography but some psychedelic relic that releases the onscreen succubus (Katelyn Pearce) into the real world. Each must deal with their own hidden desires as she attempts to steal their souls, and occasionally make their testicles explode.

Of course, "Porno" isn't really about a buxom succubus who tempts the teens. The script, by Laurence Vannicelli and Matt Black, is a riff on repression, obedience and self-hate wrapped around a retro teen movie. That means lots of gross out humour, (see the above-mentioned exploded testicles), PG nudity and, in this case, some old-school demonic imagery that would give Kenneth Anger a run for his money. The moralizing is kept to a minimum, used as a framing device for the action and, I suppose, to generate some depth for the characters, who are mostly ripped from the pages of Teen Exploitation Movie 101 Handbook. For every character like projectionist Heavy Metal Jeff (Robbie Tann), who shakes up the playbook a bit as a straight edge despite his rock ‘n roll nickname there's another one, like hunky jock Ricky (Glenn Stott) who seems to have wandered in from any number of 90s teen movies.

THEY CALL ME DR. MIAMI: 3 STARS 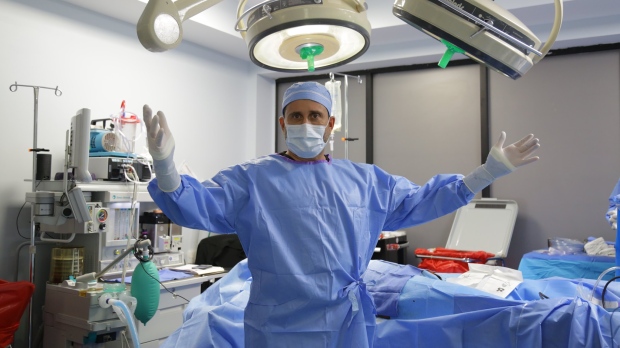 Like Dr. Pimple Popper and Dr. Oz, Dr. Michael Salzhauer a.k.a. Dr. Miami, is just as skilled at self-promotion as he is with his surgical tools. The self-proclaimed "most famous plastic surgeon in America" pioneered the online "reality" operating theatre, opening up his practice to anyone with a Snapchat account.

A new documentary, "They Call Me Dr. Miami," on VOD as part of Hot Docs at Home on CBC, details the unusual story of a surgeon who balances internet notoriety with his own deeply held Jewish Orthodox values.

Director Jean-Simon Chartier dives deep into a profession that has seen a 250 per cent rise in butt lift procedures since 2015. At the epicentre of this is the title subject, an outrageous plastic surgeon with a two year wait list. His business is built on equal parts skill and spectacle. To hammer home the point the movie opens and closes with the quote, "In societies where modern conditions of production prevail, all of life presents itself as an immense accumulation of spectacles," from Guy Debord's "Society of the Spectacle."

In the brisk eighty-seven-minute running time Chartier does not spare the spectacle. There's graphic real-life surgery, behind-the-scenes footage of the making of rap videos and even a "Game of Thrones" themed commercial shoot.

Depending on your point of view Dr. Miami is either a crass opportunist or the epitome of a capitalist society where making money by any means necessary is legit. Through a series of talking head interviews with clients and colleagues, a portrait emerges of a complex man whose career choices don't exactly square with the person he is at home. Like Dr. Jekyll and Mr. Hyde, he is two sides of one coin and Chartier's exploration of that is the thing that makes "They Call Me Dr. Miami" more than an infomercial for Salzhauer's business.

His larger-than-life online presence stands in stark contrast to the suburban father he is on the weekends — an Orthodox Jewish man who observes the Sabbath with his wife of twenty years and their five children.

We meet his wife and daughter who disapprove of his public persona, who speak about the denigration that comes along with an ego-driven, aggressive online life. It's in these at-home sequences that he becomes more man than meme.

"They Call Me Dr. Miami" explores the ethical dilemmas that arise from Salzhauer's unorthodox approach to his practice but doesn't condemn or condone his overall business. There's talk of plastic surgery's ability to fix bodies and minds, and positive testimonials from his clients, but the film's lasting impression isn't one of a freshly lifted butt or redesigned chest, it's of the balancing act between the doctor's faith and the image he presents to the world 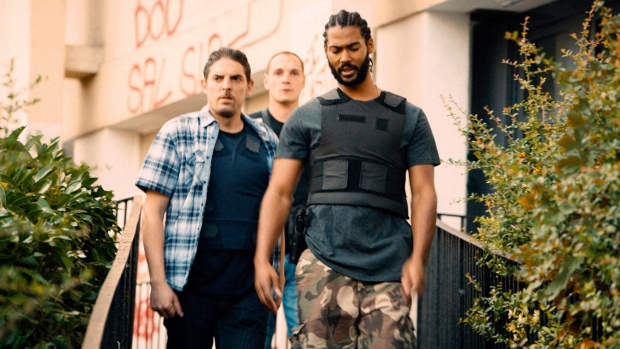 In an age of remakes and reboots comes an unexpected one, a radicle updating of "Les Miserables," Victor Hugo's classic novel of broken dreams and sacrifice. Set in modern day France, the new film "Les Miserables," now on VOD, eschews the grandeur of the Broadway musical of the same name to tell the gritty story of the downtrodden and three members of an anti-crime brigade.

Taking place over the course of two, event-filled days, the action begins when the even-tempered rookie Stephane (Damien Bonnard) joins the suburban Montfermeil Anti-Crime Squad. Teamed with Gwada (Djebril Zonga) and Chris (Alexis Manenti, who also co-wrote the script), hair tempered alpha male nicknamed Pink Pig patrol the crime ridden area of Les Bosquets. When one of the local kids, Issa (Issa Perica), steals a lion cub from a circus it sets into motion a series of events that brings to a boil the already simmering relationship between the police and the townsfolk.

Gritty and naturalistic, "Les Miserables" occasionally uses a hammer where a softer touch would suffice but the picture it paints of social unrest is vivid and unforgettable. The slow build to the explosive ending effectively echoes the tradition of revolution popular in French history and storytelling.

Introducing talented non-actors into the mix gives the movie a realistic, cinema-verite feel to the tale of injustice and anger. It's often not an easy watch but the revolt against oppression is an important and timely topic.

"Les Miserables" is a stirring debut for director Ladj Ly, one that is both thought provoking and an indictment of failed social policy.