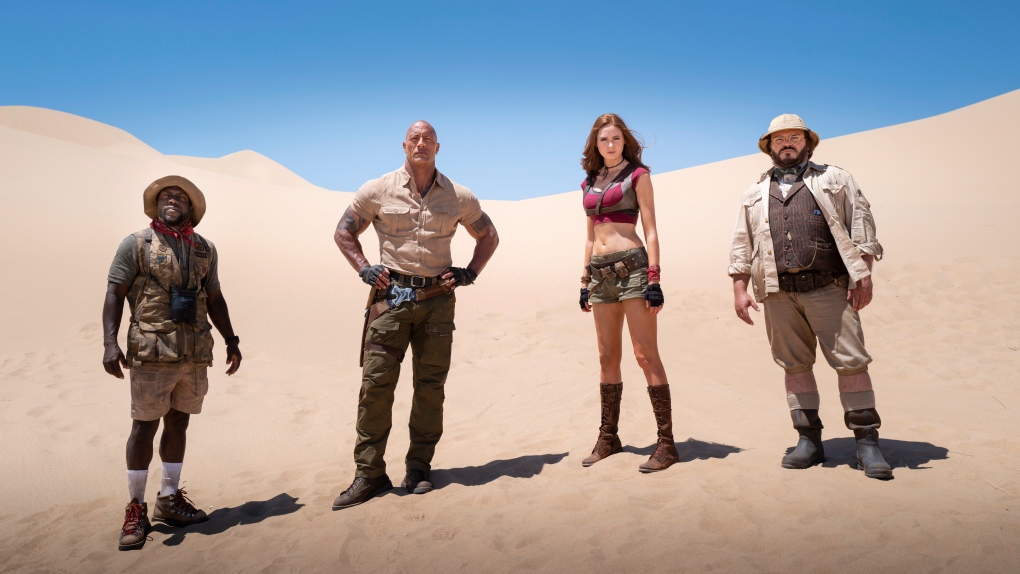 This image released by Sony shows Kevin Hart, from left, Dwayne Johnson, Karen Gillan and Jack Black in a scene from "Jumanji: The Next Level." (Hiram Garcia/Sony via AP)

JUMANJI: THE NEXT LEVEL: 2 STARS 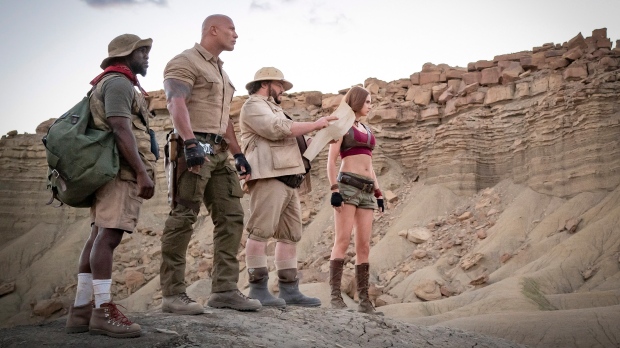 There is nothing particularly “next level” about the second instalment of the all-star, rebooted “Jumanji” franchise. It provides pretty much exactly the same level of entertainment delivered by 2017’s “Jumanji: Welcome to the Jungle,” a family-friendly action flick that offered up some good-natured laughs.

“A game for those who seek to find,” it says, “a way to leave their lives behind.”

Each clicked on an avatar and were suddenly swept away into the world of the game, plopped down in the Jumanji jungle and in the middle of an escapade. They also looked different. Their teenage selves are gone, replaced by heroic videogame characters. Spencer is now Dr. Smolder Bravestone (Dwayne Johnson), a buff hero, fearless with no vulnerabilities. Martha is warrior Ruby Roundhouse (Karen Gillan) while Fridge is zoologist Moose Finbar (Kevin Hart). The biggest change was reserved for Bethany who became cryptographer Professor Sheldon Oberon (Jack Black).

The old gang is back, and when Spencer disappears inside the game they follow along, with some new faces in the form of Spencer’s cranky granddad Eddie (Danny DeVito), the old man’s former business partner Milo (Danny Glover) and a new avatar played by Awkafina.

Once back in the videogame world of Jumanji they must find Spencer and protect a scared gem, keeping it out of the hands of a merciless warlord played by “Game of Thrones’” Rory McCann. Cue a cacophony of close calls, mismatched body swapping, CGI and silly jokes that feel left over from the 2017 movie.

After a deadly first half-hour that reunites the original cast the film briefly picks up speed when the characters land in Jumanji only to discover they aren’t who they used to be. Moose now looks like Kevin Hart but has Danny Glover’s grandfatherly personality. Eddie wound up as the muscle-bound Dr. Smolder Bravestone and Professor Sheldon Oberon has adopted Bethany’s former avatar, Professor Shelly Oberon. The switcheroos provide some laughs, particularly Hart’s take on Glover’s deliberate (i.e. glacial) dialogue delivery. He nails it, slowing down his usual mile-a-minute style to milk laughs from lines like, “Jurgen the Brutal. Is that Barbara’s boy?”

The rest of the film is action, herds of ostriches and mandrills attack and there are improbable fight scenes but all are so CGI heavy that they don’t connect. Instead they offer up roughly the same level of thrills as a theme park ride, which, no doubt this will one day be if it isn’t already.

“Jumanji: Welcome to the Jungle” appealed to audiences with a mix of charismatic actors having a good time in a silly story and inventive action. For the most part “The Next Level” goes the way of so many other sequels, replacing the original charm with a story that is larger and louder but not as engaging. “I can't believe you came back here on purpose," says Martha. You may wonder that yourself as the end credits roll. 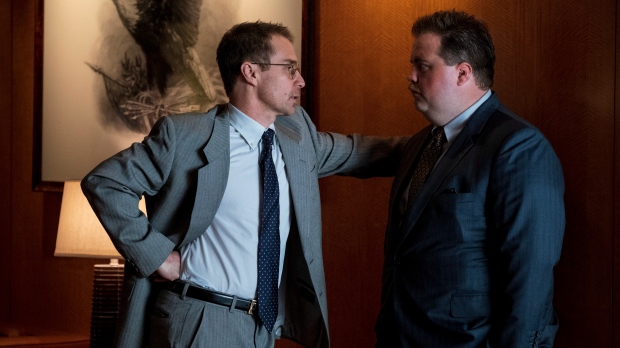 For a short time Richard Jewell was a household name, first for being a hero, then a villain, then a curiosity, a man who was railroaded by the press and the very people he revered, law enforcement. “Richard Jewell,” a new film from director Clint Eastwood looks at the man behind the headlines.

Based on the 1997 Vanity Fair article "American Nightmare: The Ballad of Richard Jewell" by Marie Brenner the film stars Paul Walter Hauser as Jewell, a law and order man, who believes in rules and dreams of being a police officer. When he isn’t studying the penal code in the bedroom of the house he shares with his mother (Kathy Bates) he works security gigs, like patrolling the grounds at Centennial Park in Atlanta during the 1996 Summer Olympics.

When he spots a suspicious package the on-duty cops say, “It’s probably someone who run off drunk,” but Jewell insists they investigate. What happens next few minutes came to define his life.

Jewell’s suspicious nature saves lives and at first he is treated like a hero. Book deals are offered and he’s on every news broadcast in the country. “Tom Brokaw was even talking about you,” says his mother. But soon the story changes. His socially awkward nature and law enforcement aspirations make him the target of an FBI investigation. They wonder if he manufactured the crisis so he could be a hero.

Eastwood and screenwriter Billy Ray paint in rather broad strokes. The villains of the piece—the FBI agents who think Jewell is “guilty as hell.” and Wilde’s reporter, not the real-life bomber who is barely mentioned—twirl their metaphorical moustaches as they work in tandem to prove Jewell’s guilt, both offering up a cartoonish but entertaining take on their characters.

The heart of the film is closer to the Jewell home. Bates brings some real emotion to the role of a loving mother whose life is turned upside down but, by the time the end credits roll, this show belongs to Hauser and Rockwell. The chemistry, obvious affection and occasional exasperation between the two is winning and authentic.

Rockwell brings his usual offbeat charm to the role of the dogged attorney but it is Hauser who leaves the lasting impression. In what should be his breakout film, the actor, best known for a supporting role in “I, Tonya,” gives an indelible performance. Jewell is an underdog, a Paul Blart with a heart of gold nearly crushed under the weight of powers far more powerful than him. His growing sense of frustration at his treatment by the FBI comes to a crescendo in a scene that allows him to win back some of the dignity that has been stripped away from him. In Hauser’s hands a character that could have been played as a bewildered screw-up becomes a likeable man with both pride and a sense of purpose.

“Richard Jewell” is the best film of 2019 to include a Macarena dance scene. It’s also a timely and searing indictment of the abuse of trial by media; of how an everyman’s life was almost ruined at the hands of people who traded on misinformation. Eastwood gives Jewell his due, humanizing a man who was treated like a story and not a person. Unfortunately, Eastwood also takes liberties in the way he portrays the reporter Scruggs, who died in 2001. Playing fast and loose with the unproven accusation that she traded sex for information, he does exactly what the media did to Jewell, point a jaundiced finger at someone who did nothing wrong.

Biopics are a big screen staple. They give us insight to people we’ll never meet and bring history to life but there has never been a biography quite like the Matthew Rankin’s “The Twentieth Century.” A heightened look at the life of Canadian Prime Minister William Lyon Mackenzie King, it’s part Dada, part Art Deco and utterly unique.

You didn’t learn any of this in Mr. Parker’s history class.

Director Matthew Rankin uses a heightened version of his main character’s biographical details to craft a satire of Canadian identity and masculinity. Like a Heritage Minute on acid the film details King’s campaign. Instead of policy the film pits politicians against one another in “traditional” Canadian pastimes like baby seal clubbing and waiting your turn.

A farce coupled with deep commentary and a heightened yet minimalist style that recalls the films of Guy Maddin by way of German Expressionism, “The Twentieth Century” has timely messages about the dangers of empty political rhetoric and the processes by which we elect our leaders.

Rankin casts a wide net here, parodying everything from politics and diffident national outlook to British imperialism and even foot fetishes but does so in a wonderfully surreal way that is equal parts silly and sincere.