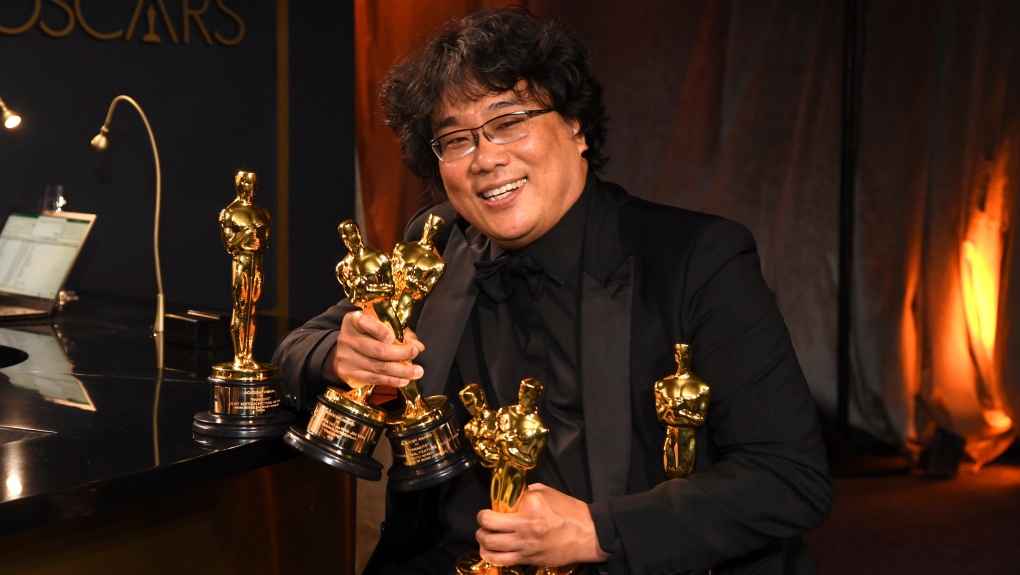 Bong Joon-ho holds the Oscars for best original screenplay, best international feature film, best directing, and best picture for 'Parasite' at the Governors Ball after the Oscars on Sunday, Feb. 9, 2020, at the Dolby Theatre in Los Angeles. (Richard Shotwell/Invision/AP)

LOS ANGELES -- Before Bong Joon Ho's "Parasite" made history as the first non-English best picture winner in Academy Awards history, he made a modest plea to American moviegoers: Don't be afraid of subtitles.

Accepting the award for best foreign-language film at the Golden Globes last month, the South Korean filmmaker, who has worked in both Seoul and Hollywood, said: "Once you overcome the 1-inch-tall barrier of subtitles, you will be introduced to so many more amazing films."

Reflecting on those words backstage at Sunday's Oscars while he clutched several of his statuettes, Bong wondered whether those boundaries were already breaking.

He had good reason to because in a thrilling and raucously applauded upset, the revolutionary win for "Parasite" ended a more than nine-decade English-language monopoly on cinema's top prize.

Hollywood's reach has long extended to all corners of the globe, but it has less frequently returned the favour.

It's an exporter, not an importer.

Even though the American film industry was built largely by immigrants, on Oscar night, its gaze has usually been turned inward.

But that's changing, and nothing showed it more than the weekend's incredible double-feature of winners.

Wang's family drama stars an all-Asian cast and was filmed in both Mandarin and English.