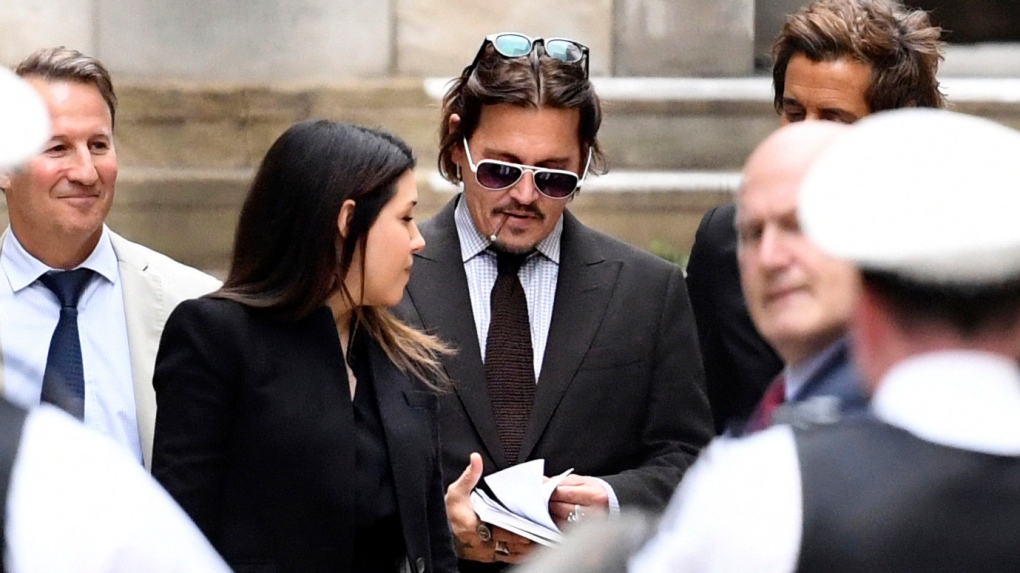 Actor Johnny Depp leaves the High Court in London, Wednesday July 15, 2020. Depp is suing News Group Newspapers, publisher of The Sun, and the paper’s executive editor, Dan Wootton, over an April 2018 article that called him a “wife-beater.” (Kirsty O'Connor/PA via AP)

Lawyers also released statements from two of Depp's former romantic partners, Winona Ryder and Vanessa Paradis, who said they could not reconcile Heard's accusations of violence with the kind and loving man they knew.

Depp is suing News Group Newspapers, publisher of The Sun, and the paper's executive editor, Dan Wootton, over an April 2018 article that called him a "wife-beater." He strongly denies abusing Heard.

In a written witness statement released as he appeared in court Thursday, security officer Sean Bett said that "throughout the course of Mr. Depp and Ms. Heard's relationship, Ms. Heard was verbally and physically abusive towards Mr. Depp."

"On many occasions, I witnessed her shout at Mr. Depp. I was also told by Mr. Depp on multiple occasions that Ms. Heard had physically abused him," he said.

Bett, a former Los Angeles sheriff's deputy who has worked for Depp for a decade, said he regularly had to remove the "Pirates of the Caribbean" star from bad situations when Heard was in an "abusive mood."

"Ms. Heard often behaved in this way when she had been drinking. I learnt quickly to recognize the signs, so that we were able to leave the situation before it escalated further," he said.

The Sun's defence relies on 14 allegations made by Heard of violence by Depp between 2013 and 2016, in settings including his private island in the Bahamas, a rented house in Australia and a private jet. He denies them all and claims Heard was the aggressor during their volatile relationship, which he has likened to "a crime scene waiting to happen."

In a week and a half of testimony, judge Andrew Nicol has heard from Depp -- who accused Heard of compiling a dossier of fake claims against him -- as well as several current or former employees who have backed his version of events.

Heard is due to give her side of the story when she enters the witness box next week.

Bett was cross-examined Thursday by The Sun's lawyer, Sasha Wass, who questioned his claim that he had never seen Heard with bruises of marks on her face or body but had several times seen Depp with bruises inflicted by his wife.

There was a dispute about the date of a photo of the actor's bruised face taken by Bett, and Wass suggested Bett was lying to protect his employer.

"Ma'am you can call me a liar a hundred times. I'm not a liar. I'm telling the truth," Bett said.

Depp's former romantic partners Vanessa Paradis and Winona Ryder had been scheduled to give evidence, but Depp's lawyer said Thursday that he no longer needed to call them, "much as it would have been a pleasure to have them here," because The Sun does not contest Depp's claim that he never hit them.

Depp and French singer Paradis had two children during a 14-year relationship that ended in 2012. American actress Ryder dated Depp for several years in the early 1990s.

In a written witness statement, Ryder said she was "shocked, confused and upset when I heard the accusations" against Depp.

"I do not want to call anyone a liar but from my experience of Johnny, it is impossible to believe that such horrific allegations are true," she added.

Paradis said in a witness statement that she had always known Depp to be "a kind, attentive, generous, and non-violent person and father."

She said Heard's abuse allegations were "nothing like the true Johnny I have known, and from my personal experience of many years, I can say he was never violent or abusive to me."