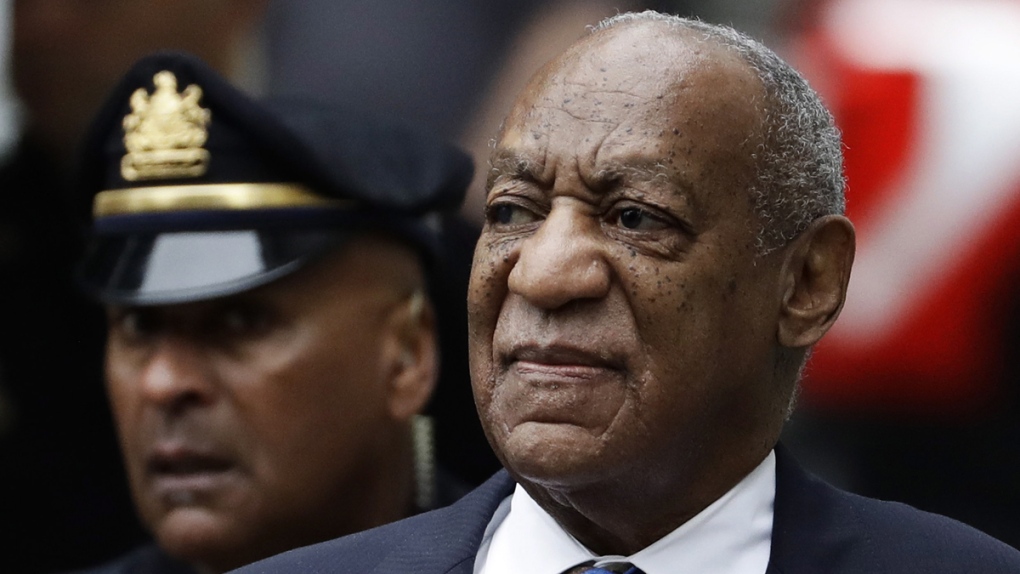 PHILADELPHIA -- In a nearly empty Philadelphia courtroom in June 2015, a lawyer for Bill Cosby implored a federal judge to keep the comedian's testimony in an old sexual battery lawsuit under wraps. It was sensitive. Embarrassing. Private.

U.S. District Judge Eduardo Robreno had another word for it.

The conduct Cosby detailed in his deposition was "perhaps criminal," Robreno wrote five years ago Monday, in a momentous decision that released the case files to The Associated Press, reopened the police investigation, and helped give rise to the #MeToo movement.

Cosby, the Hollywood paragon of Black family values, was convicted of sexual assault in 2018 as the movement exploded and women across the globe shared personal histories of sexual harassment and abuse. He is serving up to 10 years in prison.

And now in the midst of another historic reckoning -- this time addressing the treatment of African Americans and other people of colour by police and the criminal justice system -- the 82-year-old Cosby has won the right to an appeal.

He hopes to use the moment to his advantage.

"The false conviction of Bill Cosby is so much bigger than him -- it's about the destruction of ALL Black people and people of colour in America," Cosby spokesman Andrew Wyatt said when the court accepted the appeal late last month.

Cosby, who grew up in public housing in Philadelphia, has a complicated relationship with the Black community. He earned acclaim for his groundbreaking (and intentionally race-blind) performances on television in the 1950s; mingled, but rarely marched, with civil rights leaders and the Black elite in the 1960s; and solidified his wealth and power with his star turn as "America's Dad," on "The Cosby Show" in the 1980s.

All the while, he promoted education and gave millions to historically Black universities.

But his increasingly jarring comments on poverty, parenthood and personal responsibility offended younger Blacks in his later years, most famously in his 2004 "Pound Cake" speech -- which he gave just months after the sexual encounter that would prove his downfall.

As he toured the country, Cosby argued that "the antidote to racism is not rallies, protests, or pleas, but strong families and communities," as the essayist Ta-Nehisi Coates noted.

"Cosby's gospel of discipline, moral reform, and self-reliance offers a way out -- a promise that one need not cure America of its original sin in order to succeed," Coates wrote in his 2008 piece in The Atlantic, "'This Is How We Lost to the White Man': The audacity of Bill Cosby's Black conservatism."

The appeal issues the court accepted don't directly include racial bias, which Cosby's legal team raised more often on the courthouse steps in Montgomery County than inside the courtroom. His defenders, however, say race permeates the case.

Cosby's celebrity "does not change his status as a Black man," said appellate lawyer Jennifer Bonjean, the latest of more than a dozen criminal lawyers on the case.

"It would be naive to assume that his prosecution was not tainted by the same racial bias that pervades the criminal justice process in both explicit and insidious ways," she said last week.

Cosby's wife of 56 years has been more blunt.

In an interview last month with ABC-TV, Camille Cosby said the .MeToo movement ignores "the history of particular white women" who have "accused Black males of sexual assault without any proof."

"We know how women can lie," said Camille Cosby, who made only brief appearances at her husband's trials, for defence closing arguments, and has not visited him in prison. She declined to speak to the AP last week.

The appeal hinges on two questions that have shaped the case from the start:

-- Did Cosby have an ironclad deal with District Attorney Bruce Castor that Cosby could never be charged after Castor declined to arrest Cosby in 2005? Defence lawyers say Cosby relied on such a promise when he gave the 2006 deposition later unsealed in accuser Andrea Constand's lawsuit -- and used against him at trial.

Castor agrees they did. But it was never put in writing, and Castor's top deputy at the time, Risa Ferman, who helped run the initial investigation and reopened it in 2015 when she was district attorney, seemed not to know about it.

-- And, how many other accusers should be allowed to testify before the scales of justice tip against the accused?

Cosby's trial judge allowed just one other accuser in the first trial when the jury deadlocked, but five at the retrial a year later. The jury convicted Cosby on all three sex assault counts.

"The reality of it is, he gives them drugs and then he sexually assaults them," Superior Court Judge John T. Bender said at the arguments. "That's the pattern, is it not?"

Constand knew Cosby from her job at Temple University, where Cosby was a booster, alumnus and longtime trustee twice her age.

Her trial testimony matched his deposition in many respects, the key distinction being her consent to what happened at his suburban Philadelphia estate. Both say that Cosby gave her three pills for stress before Cosby, in his words, engaged in "digital penetration."

Constand, a former professional basketball player, who is white, said she was left semi-conscious and could not fight him off. (She thought she was taking a homeopathic supplement; Cosby later said it was Benadryl, while acknowledging he once gave a 19-year-old Quaaludes before sex.)

More than 60 women, mostly white but a few women of colour, have made similar accusations against Cosby.

Cosby lawyer Bonjean, though, believes the .MeToo movement is fading, and that Cosby, if he wins a new trial, might avoid what she called "the mob-justice standards of a hashtag movement."

Not long after the encounter with Constand, Cosby gave the "Pound Cake" speech to the NAACP, riffing about a scenario in which the Black community complains when someone is shot by police over a stolen piece of cake.

"Then we all run out and are outraged, `The cops shouldn't have shot him.' What the hell was he doing with the pound cake in his hand?" Cosby asked.

"You rape women, Bill Cosby, so turn the crazy down a couple notches," he said onstage in 2014.

Former prosecutor Kristen Gibbons Feden, who gave closing arguments at Cosby's retrial, recognizes the good Cosby did for the Black community. She also believes that racial bias exists in the criminal justice system.

"It doesn't make Cosby innocent," said Feden, who is Black. "It means we need to fix the criminal justice system."

Wake Forest University Dean Jonathan L. Walton, who teaches about African American social movements, said that Cosby undeniably boosted the representation of Blacks in American culture. Yet Walton said Cosby might not be the best messenger for today's moment.

"One should agree with him as it relates to systemic racism and the injustices of the `justice system,"' said Walton, the divinity school dean, "while also being suspicious of what seems to be a pattern of his, of only identifying problems when they personally benefit him."