Angelina Jolie's 'Unbroken' strikes a nerve in Japan over wartime past 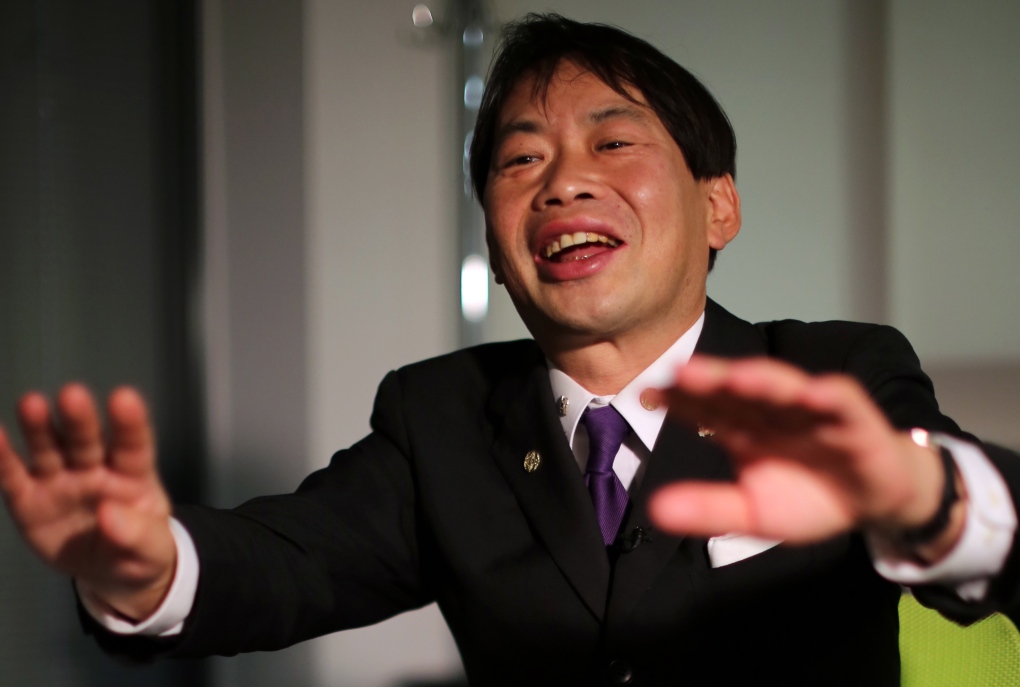 In this Dec. 10, 2014 photo, Mutsuhiro Takeuchi, a nationalist-leaning educator and a priest in the traditional Shinto religion, speaks during an interview with The Associated Press, in Tokyo. (AP Photo/Eugene Hoshiko)

TOKYO -- Angelina Jolie's new movie "Unbroken" has not been released in Japan yet, but it has already struck a nerve in a country still wrestling over its wartime past.

The buzz on social networks and in online chatter is decidedly negative over the film, which depicts a U.S. Olympic runner who endures torture at a Japanese prisoner-of-war camp during World War II.

Some people are calling for a boycott of the movie, although there is no release date in Japan yet. It hits theatres in the U.S. on Dec. 25.

Others want the ban extended to Jolie, the director -- unusual in a nation enamoured with Hollywood, and especially Jolie and her husband Brad Pitt, who have reputations as Japan lovers.

The movie follows the real-life story of Louis Zamperini as told in a 2010 book by Laura Hillenbrand. The book has not been translated into Japanese, but online trailers have provoked outrage. Zamperini, played by Jack O'Connell, survived in a raft for 47 days with two other crewmen after their B-24 bomber crashed into the Pacific Ocean, only to be captured by the Japanese and sent to a prisoner-of-war camp.

Especially provocative is a passage in the book that accuses the Japanese of engaging in cannibalism of POWs. It is not clear how much of that will be in the movie, but in Japan that is too much for some.

"There was absolutely no cannibalism," said Mutsuhiro Takeuchi, a nationalist-leaning educator and a priest in the traditional Shinto religion. "That is not our custom."

Takeuchi acknowledged Jolie is free to make whatever movie she wants, stressing that Shinto believes in forgive-and-forget.

But he urged Jolie to study history, saying executed war criminals were charged with political crimes, not torture.

"Even Japanese don't know their own history so misunderstandings arise," said Takeuchi, who heads his research organization, the Japan Culture Intelligence Association.

Hollywood films that touch on sensitive topics for the Japanese have had a troubled history here.

Theatrescancelled screenings of the Oscar-winning 2009 documentary "The Cove" about the bloody dolphin hunts in the Japanese town of Taiji after the distributor was deluged with threats from people who said the movie denigrated the "culture" of eating dolphins, although most Japanese have never eaten dolphin or whale meat.

Roland Kelts, a journalist and expert on Japanese culture, called the outburst over "Unbroken," like the frenzy over "The Cove," "banal and predictable."

"None of them have even seen the film, and while it is based on one man's story, it's a feature, not a documentary. There are plenty of movies that depict the brutality and inhumanity of war," he said.

Jolie said recently on a promotion tour in Australia that she wanted to depict a human story, one that gives hope, noting that war "brings out the extremes," both the good and the bad, in people.

The release of "Unbroken" comes at a time some in Japan are downplaying the country's colonization of its Asian neighbours and the aggressive acts carried out by the Imperial Army during World War II.

For example, some politicians dispute the role of Japanese soldiers in the Rape of Nanjing, which began in 1937, in which an estimated 300,000 Chinese were killed. They say that is a vast over count.

Similarly, they reject historical studies that show women from several Asian countries, especially Korea, were forced into prostitution by the Japanese military. Some oppose the term "sex slave," which the U.N. uses, preferring the euphemistic "comfort women."

Japan has not always been averse to Hollywood portrayals of World War II.

Japanese directors have made their share of movies critical of war. Akira Kurosawa made "No Regrets for Our Youth," as well as "Ran" and "Seven Samurai." Kihachi Okamoto's "The Human Bullet" and Kon Ichikawa's "The Burmese Harp" relay powerful anti-war messages.