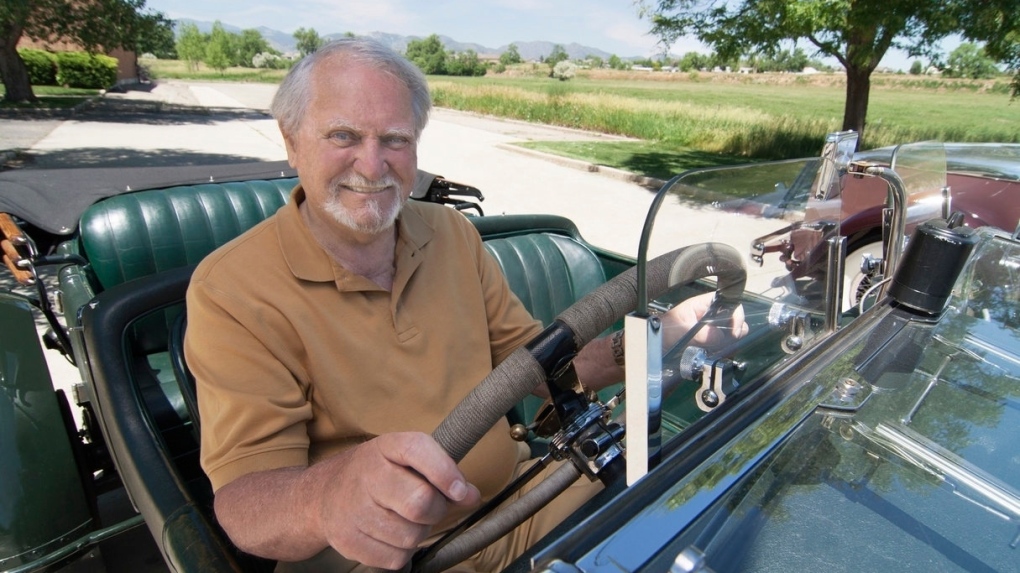 This 2007 image released by G.P. Putnam's Sons shows author Clive Cussler riding in a classic car. Cussler died on Monday, Feb. 24, 2020 at his home in Scottsdale, AZ. He was 88. (Ronnie Bramhall/G.P. Putnam's Sons via AP)

Cussler died Monday at his home in Scottsdale, Arizona, said Alexis Welby, spokeswoman for publisher Penguin Random House. He was 88. The cause was not disclosed.

It is with a heavy heart that I share the sad news that my husband Clive passed away Mon. It has been a privilege to share in his life. I want to thank you his fans & friends for all the support. He was the kindest most gentle man I ever met.I know, his adventures will continue. pic.twitter.com/2fQZcQsuMd

Cussler was an Illinois native who was raised in Southern California and lived in Arizona for most of his final years, but he sent Pitt around the globe in plots that ranged from the bold to the incredible. "The Treasure" features an aspiring Aztec despot who murders an American envoy, the hijacking of a plane carrying the United Nations secretary-general and soldiers from ancient Rome looting the Library of Alexandria. In "Iceberg," the presidents of French Guiana and the Dominican Republic are the ones in danger, during a visit to Disneyland. In "Sahara," a race across the desert somehow leads to new information about the assassination of Abraham Lincoln.

"Again and again, Dirk Pitt, working for the fictional National Underwater and Marine Agency, must find a sunken vessel and retrieve some artifact," Mark Schone, summarizing Cussler's novels, wrote in The New York Times in 2004. "Evil forces, be they Commies or Blofeldian madmen, try to stop him. Along the way Pitt saves himself, the world and the damsel of the moment."

Cussler has a new novel, "Journey of the Pharaohs," set to be released March 10, with several more awaiting posthumous publication.

In real life, Cussler founded his own National Underwater and Marine Agency and participated in dozens of searches for old ships, including one that turned up a steamship belonging to Cornelius Vanderbilt. He also had a long history of questionable claims -- some admitted, some denied.

All of us at Putnam are heartbroken to share that our beloved author and “Grandmaster of Adventure”, Clive Cussler, has passed away. We’re sending our condolences and thoughts to Clive’s family, friends, and legions of readers around the world. https://t.co/SU7MKICJqq pic.twitter.com/KgjjsTIGps

"He can definitely spin the tall tales and is a master of fiction. But that doesn't mean I buy into his alleged discovery claims," Dr. E. Lee Spence wrote on his blog in 2011. Spence, a prominent underwater archaeologist feuded with Cussler over which of them recovered a Confederate submarine.

Born an only child in 1931 in Aurora, Illinois, and raised in Alhambra, California, Cussler's name and writing persona have the air of a pseudonym, but he was born with his moniker, named for the British actor Clive Brook. He studied for two years at Pasadena City College before enlisting in the Air Force and serving as a mechanic and flight engineer during the Korean War.

In 1955, he married Barbara Knight, with whom he had three children. Through much of the 1960s, he worked in advertising, as a copywriter and creative director. Among the better known slogans he helped coin -- "It's stronger than dirt," for an Ajax laundry detergent campaign.

In his free time, he was writing fiction and moonlighting at a skin-diving equipment shop, where his wife suggested he work to help gather material for his novels.

"When creating advertising, I had always looked at the competition and wondered what I could conceive that was totally different," Cussler said in an interview included in "Dirk Pitt Revealed," a nonfiction book released in 1998. "(James) Bond was becoming incredibly popular through the movies, and I knew I couldn't match Ian Fleming's style and prose. So I was determined not to write about a detective, secret agent or undercover investigator or deal in murder mysteries. My hero's adventures would be based on and under water."

Cussler finished manuscripts for "Mediterranean Caper" and "Iceberg," but had no literary agent: so he created one. He purchased a thousand sheets of blank letter paper, got a friend in advertising to design a logo for "The Charles Winthrop Agency" and sent his first inquiry to Peter Lampack of the William Morris Agency. Lampack agreed to take on Cussler and remained with him long after the author confessed his charade.

"I told him the story of Charlie Winthrop with great trepidation," Cussler explained to the Arizona Republic. "I sat there waiting for the result, and he sat there blank for a minute, and then he laughed himself under the table. And he said, 'Oh my God. I always thought Charlie Winthrop was some guy I met while I was drunk at a cocktail party."'

"Mediterranean Caper" came out in 1973, followed by "Iceberg" two years later and "Raise the Titanic!" in 1976. He would turn out more than 20 Dirk Pitt novels and expand into children's books and such adventure series as "The Oregon Files" and "The Numa Files."

Cussler had claimed his worldwide sales topped 100 million copies, but in a legal battle with Crusader Entertainment, which alleged he had misrepresented his popularity, it was determined the number was closer to 40 million. In 2007, a Los Angeles jury awarded Crusader $5 million but also ordered that Cussler receive $8.5 million because the film company only adapted one ("Sahara") of the two books it had agreed to produce.

The film version of "Sahara" came out in 2005 and starred Matthew McConaughey and Penelope Cruz. An adaptation of "Raise the Titanic!" -- its title the same except for dropping the exclamation point, came out in 1980 and featured Jason Robards and Alec Guinness.

In recent years, Cussler began working with co-authors and collaborated with his son on "Poseidon's Arrow," "Crescent Dawn" and "Arctic Drift." Cussler's son is Dirk Cussler. Pitt himself had a son, called, of course, Dirk Pitt Jr.

In addition to Dirk Cussler, the author is survived by his second wife, Janet, daughters Teri and Dayna, four grandchildren and four great-grandchildren.