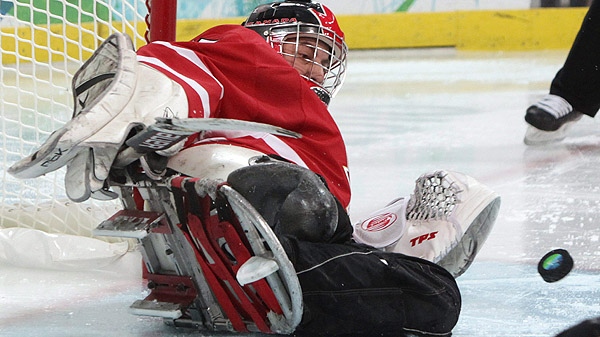 Canada's Paul Rosen makes a save against Japan during second period semi-final ice sledge hockey action at the 2010 Winter Paralympics in Vancouver, B.C., on Thursday March 18 2010. (THE CANADIAN PRESS/Darryl Dyck)

Paul Rosen has had a headache for days, the after-effect of his latest concussion, at least the eighth he's sustained in decades of playing hockey and other sports.

He now knows the drill: shut everything down, body and brain. Rest -- and then rest some more.

Not that Rosen's having trouble giving into the urge to sleep. His fatigue has been so pronounced since getting beaned in the temple by a foul ball while umpiring a baseball game a week earlier, he's lucky to accomplish more than having a shower each day.

"For me, it's the fatigue factor that's making everything else so difficult," says Rosen, who's also been experiencing dizziness, confusion and a fuzzy memory, all trademark symptoms of concussion.

Rosen took his share of brain-rattling head thumpings as a big, fight-prone right-winger on amateur teams during his teens and 20s.

But after losing most of one leg in 1999 because of a rampant infection following knee-replacement surgery, Rosen turned to sledge hockey, becoming goalie for Canada's national team from 2000 until he retired a year ago at age 50.

He figures he suffered five concussions during his sledge hockey career, which included three Paralympics --the team took gold at the 2006 Games in Torino -- and five world championships.

"The first real bad one was in Salt Lake, where I took a sled to the head making a diving save," he recalls. "The game in sled hockey as a goalie, especially if you're an aggressive goalie like I was, you get hit a lot in the head, because an able-bodied goalie's stomach is where my head is."

Throughout his career, like a lot of athletes, he just sucked up the symptoms as much as could and went back on the ice.

It's only with the recent, growing attention on concussion -- think side-lined Sidney Crosby, the possible concussion-related suicides of three NHL enforcers this summer and reports of neuron wasting in the brains of deceased pro athletes -- that Rosen realized how dangerous these brain injuries can be.

Since the effects of concussion are so multifaceted, it can often take a team of medical and allied specialists to treat the brain trauma, especially if it's severe and prolonged or one in a string of such injuries.

It's critical that anybody who has suffered a significant blow to the head should see a doctor, whether a neurology specialist, a sports medicine physician, an emergency room doctor or a family doctor to determine whether a concussion has occurred, says University of Toronto neurosurgeon Dr. Karen Johnston.

"Our treatment, no matter what type of practitioner you are, really has to start with the same structured approach," says Johnston, who also heads the concussion management program at Athletic Edge Sports Medicine.

"It starts with identifying the injury, which is key. And then we have cognitive and physical rest."

For both children and adults, that usually means unplugging from anything that stimulates the brain -- working on computers, texting or watching TV and movies.

"You want to shut down anybody whose brain is sort of working on overdrive," she says. "From the point of view of an adult, it may be their work situation. It can certainly be any other stressors, so it can be financial stressors. It can be personal things, relationships, all sorts of stress.

"You just want to put it all on the back burner while the brain is in recovery mode."

As symptoms start to subside, the concussed patient can begin resuming some activities, but gradually to avoid a set-back, says Johnston, adding that the effects from the brain-rattling can last longer in some people than others, especially if there's been multiple concussions.

"Honestly, all concussions I think in a sense are the same injury, so we treat a professional athlete in the same way that we treat a child.

"The brain sees the injury in the same way, so there shouldn't be a different way to handle each one, although we have to acknowledge that each one is individually managed because it may reveal itself in slightly different ways."

At York University in Toronto, the sport injury clinic provides a team approach to dealing with concussions among players on its varsity teams.

Sports medicine doctors, physiotherapists, chiropractors, massage therapists and more all bring their individual specialty to get an athlete back on the field or ice, but always with a go-slow approach, says Cindy Hughes, head athletic therapist and clinic manager.

"What's really difficult is to figure out first of all: Has the brain 100 per cent fully recovered? When is it safe to return people to their activity? And what treatment is actually helping?" says Hughes, who likens what happens to the brain after a head trauma to an egg yoke banging around inside its shell.

Besides the cognitive effects from a skull-jarring, there can be physical repercussions such as head, neck and back pain. That may call for one or more therapists, each using a different technique to try to alleviate muscle tension, she says.

"Maybe acupuncture is going to work for that person, or maybe it's cranial-sacral therapy or maybe it's physio, because every concussion is different ... So we try everything."

One of those therapies is osteopathy, a system of hands-on manipulation of the bones and tissues aimed at restoring the body to health.

Part of that treatment can include cranial-sacral massage, says Natalie Randall, an athletic therapist and osteopath at Cove Sport Therapy in Dartmouth, N.S.

The osteopath will work on what's called the dura mater ("tough mother" in Latin), one of the protective layers around the spinal cord upwards from the sacrum, or tailbone, that also cushions the brain inside the skull.

"We can work on the base of the skull, right where it attaches," she says of the dura. "Can we traction it? Can we release it? Can we soften that tough mother to not be vicing that head so tight?"

Other cranial techniques include manipulating areas inside the mouth and on the head around the ears, says Randall, explaining that one goal is to restore the flow of cerebrospinal fluid, which carries nutrients to the brain.

"The osteopaths believe that we can feel that rhythm of cerebrospinal fluid and neurological activity in the body with our hands, with light, gentle palpation.

"A lot of doctors that work with me say, "I don't really know what you do, but the athletes seem to get better,'" she says, allowing that most patients show at least some improvement with the therapy.

"Does everybody get better? No. I wish we were that magical."

Still, Randall says sustaining a concussion represents a major withdrawal from one's "bank account of health. And until you pay off your debt, you're not going to feel good.

"So getting an osteopathic treatment is just one deposit into that bank account. So is physio, chiro, massage and athletic therapy ... It's a combined effort."

Not to be forgotten in the mix of concussion symptoms are the psycho-social effects -- depression, disordered sleep, anxiety and even personality changes, says Dr. Shree Bhalerao, a psychiatrist at St. Michael's Hospital in Toronto.

Brain trauma can disrupt neurotransmitters like serotonin that regulate mood and behaviour.

"It's like a snow globe," says Bhalerao. "When you shake the globe, you wait until it eventually settles and you hope that during the settling process and the healing process, it comes back to the way it was."

Should depression and related symptoms persist -- and for an athlete being forced into inactivity and away from teammates, such disorders can be exacerbated -- it's critical to seek help, he says.

"We really emphasize using support networks, like talking to your family, talking to a therapist, talking to coaches and being honest."

Some people will see a cognitive-behavioural therapist or go to group therapy. There are even Internet sites for concussion-related depression that help a person cope, he says. Doctors may also prescribe antidepressants or other medications.

"The main thing is safety first," says Bhalerao, stressing the need for both physical and psychological healing, and avoiding repeat concussions that can lead to severe cognitive impairment, including progressive forms of dementia.

"All of these things can turn the clock one way and you can't turn it back. You end up in a situation where you may not retrieve your full cognitive function, you may not return back to the way you were."

For Paul Rosen, the potential long-term fallout from multiple concussions is perhaps his greatest fear.

"I'm almost 52 and I know I'm going to have problems as I get later into my 50s and 60s," says Rosen, who has joined an online organization called StopConcussions.com that aims to educate athletes of all ages, amateur and pro alike, about the fallout from blows to the head.