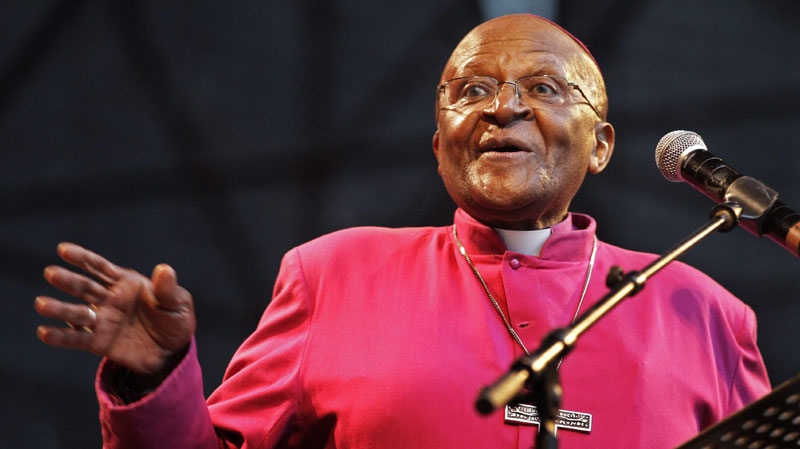 The group urges Canada to once again play a constructive role in global affairs, as it did in the 1980s when it imposed sanctions on the apartheid regime.

It wants the Canadian government to play a more helpful role at the climate conference in Durban, South Africa.

"Canada, you were once considered a leader on global issues like human rights and environmental protection. Today, you're home to polluting tar sands oil, speeding the dangerous effects of climate change," says the letter, signed by Tutu, a half-dozen South African activists and African environmental groups.

"For us in Africa, climate change is a life and death issue. By dramatically increasing Canada's global warming pollution, tar sands mining and drilling makes the problem worse, and exposes million of Africans to more devastating drought and famine today and in the years to come."

The group took out a full-page Canadian newspaper ad Wednesday with its message condemning the federal government. It is also supported by Canadian environmental groups, including Environmental Defence, Equiterre and Greenpeace Canada.

An image of the Maple Leaf, divided in two by a dotted line, is featured prominently in the ad. One half resembles the red leaf on the Canadian flag, while the other side shows a blackened leaf, dripping with oil.

The Canadian government, meanwhile, is dropping strong hints that it will seek to withdraw from the Kyoto accord.

When asked about the ad Tuesday, the Harper government wouldn't mention Tutu by name but simply said Kyoto can't work because it doesn't include major emitters.

"Our Government is balancing the need for a cleaner and healthier environment with protecting jobs and economic growth," a spokesman for the Prime Minister's Office wrote in an email.

"We remain committed to reducing Canada's greenhouse gas emissions by 17 per cent below 2005 levels by 2020, and we are making good progress."