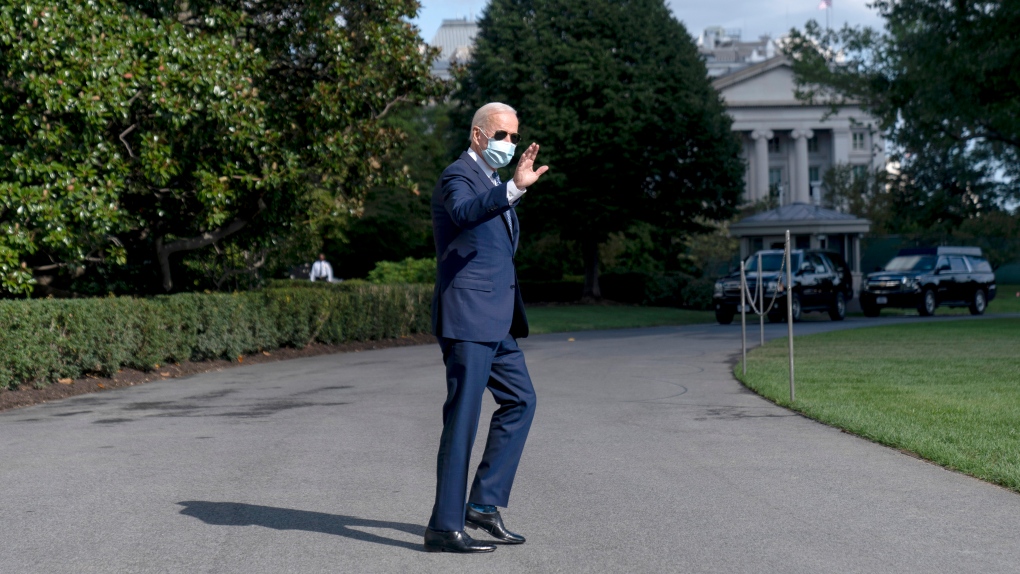 U.S. President Joe Biden waves as he walks towards Marine One on the South Lawn of the White House in Washington, Monday, Sept. 20, 2021, for a short trip to Andrews Air Force Base, Md., and then on to New York ahead of a United Nations General Assembly meeting. (AP Photo/Andrew Harnik)

WASHINGTON -- Congress must fund the government in the next 10 days, or risk a federal shutdown.

Raise the nation's borrowing limit, or default on its debt.

All this while Democratic lawmakers are laboring to shoulder President Joe Biden's massive $3.5 trillion “build back better” agenda through the House and Senate with stark opposition from Republicans.

The magnitude of the challenges ahead and the speed required to accomplish the job are like nothing Congress has faced in recent memory, situating Biden's entire domestic agenda and the political fate of his Democratic party at a crucial moment.

On Monday, the Democratic leaders backed by the White House announced they would push ahead on one front - with a vote to fund the government and suspend the debt limit, all but daring Republicans to oppose the package and risk a crisis.

“The American people expect our Republican colleagues to live up to their responsibilities and make good on the debts they proudly helped incur,” wrote House Speaker Nancy Pelosi and Senate Democratic leader Chuck Schumer in a joint statement.

The Republicans have made it clear they will not be helping with almost any of it. Instead, as the minority party in Congress hoping to regain control in the next election in 2022, Republicans plan to sit back, watching and waiting to see if Biden and his allies can succeed against the odds - or spectacularly fail.

The vote this week on funding to keep the government running past Sept. 30, the end of the fiscal year, will force the political stalemate into the open.

The package is expected to keep most spending at its current levels on a stopgap basis through the end of the year and include supplemental funds for the aftermath of Hurricane Ida and other natural disasters, as well as money to help defray the evacuations from Afghanistan. Tacking on legislative language to allow more borrowing to cover the nation's debt payments through 2022 sets the stage for a showdown.

The Treasury Department warned that it will soon run out of cash-on-hand, and have to rely on incoming receipts to pay its obligations, now at $28.4 trillion. That could force the Treasury to delay or miss payments, a devastating situation.

Once a routine matter, lifting the debt ceiling has become a political weapon of choice for Republicans ever since the 2011 arrival of tea party lawmakers who refused to lift it. At the time, they argued against more spending and the standoff triggered a fiscal crisis.

Echoing that strategy, Senate Republican leader Mitch McConnell says he's not about to help pay off debts when Biden is about to pile on more with a “reckless” tax and spending package.

“Since Democrats decided to go it alone, they will not get Senate Republicans' help with raising the debt limit. I've explained this clearly and consistently for over two months,” McConnell said Monday on the Senate floor.

Backed by the White House, Pelosi counters that when McConnell was in control of the Senate he relied on Democratic votes to help raise the debt ceiling during the past administration and she expects the same from him now.

“The debt limit is a shared responsibility, and I urge Congress to come together,” Pelosi, D-Calif., said in a letter late Sunday to colleagues.

Schumer, D-N.Y., said raising the debt ceiling is necessary to meet the country's past commitments, and “what Republicans are doing is nothing short of a dine-and-dash of historic proportions.”

Meanwhile, behind the scenes, Democrats are negotiating among themselves over Biden's big $3.5 trillion package as the price tag likely slips to win over skeptical centrist lawmakers who view it as too much.

The size and scope of Biden's “Build Back Better” initiative cannot be overstated. It touches almost all aspects of Americans' lives.

Biden's plan aims to not just rebuild the country after the COVID-19 crisis and economic fallout, but begin to change longstanding federal spending patterns in ways that provide more services to more Americans, and attempt to level the growing income inequality that permeates the economy.

The proposal would impose tax hikes on corporations and wealthy Americans earning beyond $400,000 a year and plow that money back into federal programs for young and old. It would increase and expand government health, education and family support programs for households, children and seniors, and boost environmental infrastructure programs to fight climate change.

One topic the bill may not cover is immigration, after the Senate parliamentarian advised that Biden's proposal would not pass the chamber's rules for consideration under the budget process.

With Republicans opposed in lockstep to Biden's sweeping vision, Democrats have no votes to spare. As Democrats try to rally support from their own ranks, they have only the most narrow control of Congress as the majority, with a 50-50 Senate and just a few votes' margin in the House.

Pelosi and her leadership team are expected to huddle at the start of the week, and Senate Democrats are meeting as well, as they craft the details of the package ahead of a self-imposed deadline.

By Sept. 27, Pelosi has promised a vote on a companion bill, a $1 trillion bipartisan infrastructure bill of public works projects that enjoys widespread support from both parties in the Senate, though House Republicans mostly oppose it.

Even though that bipartisan bill should be an easy legislative lift, it too faces a political obstacle course ahead. Dozens of lawmakers in the Congressional Progressive Caucus are expected to vote against it if it comes ahead of the broader Biden package. But centrists won't vote for the broader package unless they are assured the bipartisan bill will also be included.