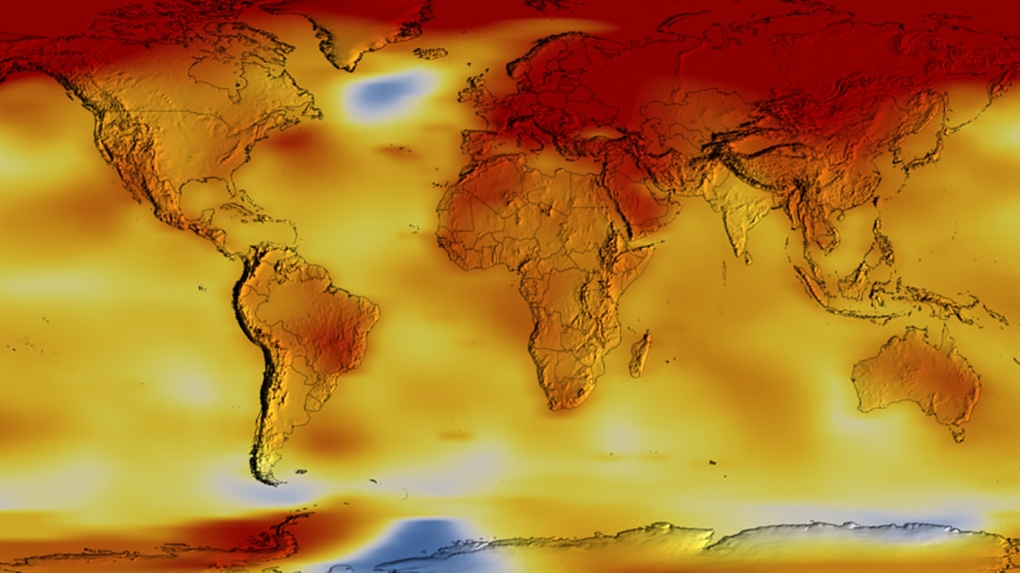 This colour-coded map shows a progression of changing global surface temperature anomalies. Normal temperatures are the average over the 30-year baseline period from 1951 to 1980. (NASA / CNN)

Remember the movie, "The Day After Tomorrow," in which a catastrophic series of global disasters strike after climate change causes the world's ocean currents to stop?

Well, new research reveals Earth's major ocean currents are slowing down, and though the consequences will not be as immediate or dramatic as in the Hollywood fiction, there are real-world impacts for global weather patterns and sea levels.

The slowdown of ocean circulation is directly caused by warming global temperatures and has been predicted by climate scientists.

"This has been predicted, basically for decades, that this circulation would weaken in response to global warming. And now we have the strongest evidence that this is already happening," said Stefan Rahmstorf  of Potsdam University, who contributed to this research.

The Atlantic Meridional Overturning Circulation (AMOC) transports water across the planet's oceans, including the Atlantic, Pacific and Indian. The region contributing to the slowdown is the North Atlantic, according to the research.

In this part of the ocean, the Greenland ice sheets are melting, contributing to both a rise in sea levels and serving to reduce the speed of the circulation.

"This indicates that the slowdown is likely not a natural change but the result of human influence. The AMOC has a profound influence on global climate, and particularly in North America and Europe, so this evidence of an ongoing weakening of the circulation is critical new evidence for the interpretation of future projections of regional and global climate," said Andrew Meijers, deputy science leader of polar oceans at British Antarctic Survey.

Ice melting in Greenland and the heavy rainfall over the North Atlantic induced by climate change has affected the salinity and density of the waters, Rahmstorf explained.

"Surface warming and the increased water cycle, increased rainfall and the ice melt are all a consequence of global warming" across parts of the North Atlantic Ocean, he said.

As warm water currents move north, they typically turn back south as it gets cooler and heavier. Added freshwater from the melting ice is causing this turn to be slower because of reduced salinity.

"This weakening also leads to cold in the northern Atlantic, but it's confined to the ocean. This cold blob, as we call it, is over the ocean, and it doesn't touch on land areas," said Rahmstorf. Current estimates show this weakening is moderate, at about 15% weaker compared to normal and based on data analyzed up from to 1,600 years ago.

One of the main impacts of the slowing ocean circulation is on sea levels, especially those of the U.S. East Coast.

"The northward surface flow of the AMOC leads to a deflection of water masses to the right, away from the U.S. East Coast. This is due to Earth's rotation that diverts moving objects such as currents to the right in the Northern Hemisphere and to the left in the Southern Hemisphere. As the current slows down, this effect weakens and more water can pile up at the U.S. East Coast, leading to an enhanced sea-level rise," said Levke Caesar, one of the authors of the report.

Sea-level rise is already happening due to factors like melting ice sheets and warming oceans. According to the National Oceanic and Atmospheric Administration (NOAA), water levels have risen by eight to nine inches on average within the past 140 years.

The rate at which these waters are rising has also increased in recent years.

"The pace of global sea-level rise more than doubled from 1.4 mm per year throughout most of the twentieth century to 3.6 mm per year from 2006-2015," said NOAA.

A further slowdown of global ocean circulation, especially along the crucial Gulf Stream current off the eastern coastline of the U.S., could combine with the already accelerating sea-level rise to make major Northeastern cities even more vulnerable to flooding.

Global weather patterns are critically linked with the ocean circulations and their transport of heat and nutrients around the planet.

An increase in heatwaves across Europe and stronger hurricanes closer to the U.S. coastline because of warmer water drifting closer to the coast can be linked to the ocean circulation, Rahmstorf said.

"The world's seven warmest years have all occurred since 2014, with 10 of the warmest years occurring since 2005," said NOAA. Heatwaves are becoming more frequent already.

The ocean and the currents also play a role in absorbing carbon dioxide, the most dominant greenhouse gas, from the atmosphere. The changing currents could decrease the amount of carbon being taken out of the atmosphere, according to NASA.

In addition to people being affected, the marine biology population is also at risk.

Marine organisms "very strongly depend on these ocean currents, which basically set the conditions for the whole ecosystem in terms of nutrient supply, temperature, and salinity conditions," Rahmstorf said.

When asked whether the AMOC could slow down further or even stop, Rahmstorf said climate models suggest currents will slow down to between 34% and 45% by 2100.

"Despite a lot of research over the last decade on this, it's very hard to pin down quantitatively, how far away is this tipping point. But the kind of model simulations that I know suggest that if you weaken this circulation by roughly half, you're getting into a critical state. And so this could well ... happen by the end of the century," Rahmstorf said.

"We should (strive to) stay well clear of that tipping point because the consequences if the circulation would break down all together would be really dramatic."

Hollywood has shown us this potential worst-case scenario from climate change. And while the consequences shown in "The Day After Tomorrow" are very unlikely, they do illustrate how runaway impacts from climate change could result if we do not listen to the warnings coming from climate scientists.