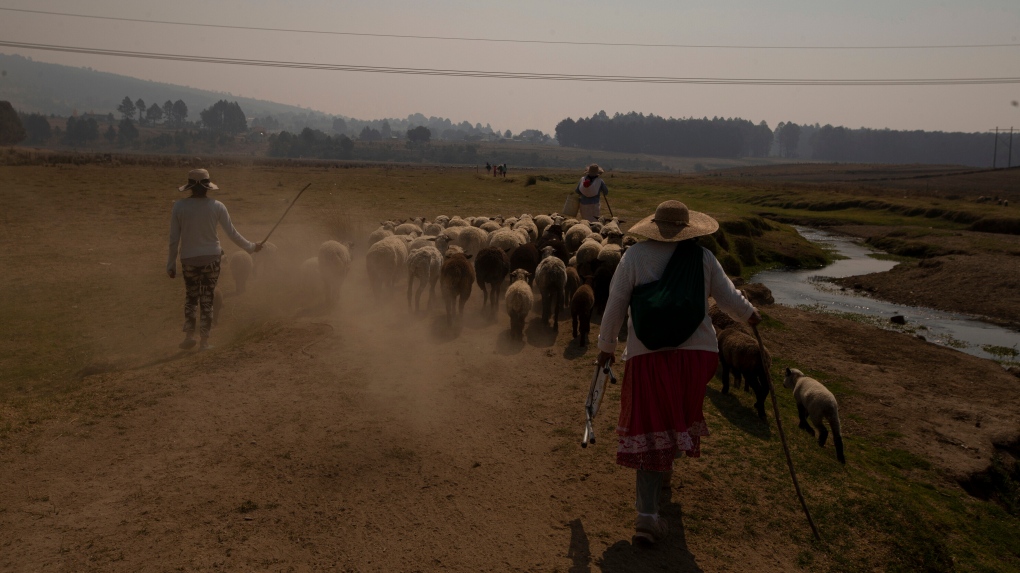 Shepherds walk with their flock along the banks of the Villa Victoria Dam, the main water supply for Mexico City residents, on the outskirts of Toluca, Mexico, Thursday, April 22, 2021. (AP Photo/Fernando Llano)

MEXICO CITY -- Drought conditions now cover 85 per cent of Mexico, and residents of the nation's central region said Thursday that lakes and reservoirs are simply drying up, including the country's second-largest body of fresh water.

The mayor of Mexico City said the drought was the worst in 30 years, and the problem can be seen at the reservoirs that store water from other states to supply the capital.

Some of them, like the Villa Victoria reservoir west of the capital, are at one-third of their normal capacity, with a month and a half to go before any significant rain is expected.

Isaias Salgado, 60, was trying to fill his water tank truck at Villa Victoria, a task that normally takes him just half an hour. On Thursday he estimated it was taking 3 1/2 hours to pump water into his 10,000-litre tanker.

"The reservoir is drying up," said Salgado. "If they keep pumping water out, by May it will be completely dry, and the fish will die."

Mexico City Mayor Claudia Sheinbaum said that as the drought worsened, more people have tended to water their lawns and gardens, which worsens the problem.

The capital's 9 million inhabitants rely on reservoirs like Villa Victoria and two others -- which together are at about 44% capacity -- for a quarter of their water; most of the rest comes from wells within city limits. But the city's own water table is dropping and leaky pipes waste much of what is brought into the city.

Rogelio Angeles Hernandez, 61, has been fishing the waters of Villa Victoria for the last 30 years. He isn't so much worried about his own catch; in dry seasons of the past, residents were able to cart fish off in wheelbarrows as water levels receded.

But tourism at reservoirs, like Valle de Bravo further to the west, has been hit by falling water levels.

In the end, it is the capital that is really going to suffer.

"Fishing is the same, but the real impact will be on the people in Mexico City, who are going to get less water," Angeles Hernandez said.

Farther to the west, in Michoacan state, the country is at risk of losing its second-largest lake, Lake Cuitzeo. About 75% of the lake bed is now dry, said Alberto Gomez-Tagle, a biologist and researcher who chairs the Natural Resources Institute of the University of Michoacan.

Gomez-Tagle said that deforestation, roads built across the shallow lake and diversion of water for human use have played a role, but three extremely dry years have left the lake a dusty plain.

Michoacan Gov. Silvano Aureoles said so much of the lake has dried up that shoreline communities now suffer dust storms. He said communities might have to start planting vegetation on the lake bed to prevent the storms.

In a petition to the government, residents of communities around the lake said only six of 19 fish species once present in Cuitzeo now remain. They said the dust storms had caused tens of thousands of respiratory and intestinal infections among local residents.