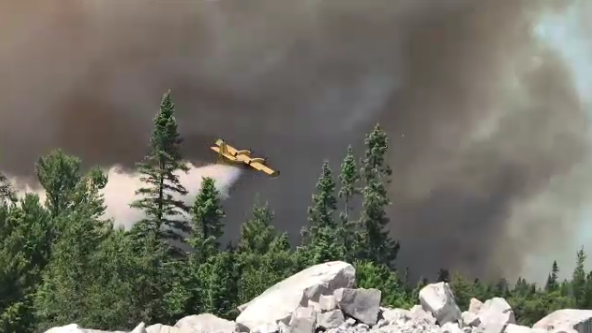 Authorities say more than 50 homes have been evacuated in northeastern Ontario this weekend due to the threat of raging forest fires.

A mandatory evacuation order was issued Friday for the Key Harbour area and the municipality of Killarney, south of the French River Provincial Park, after a fire more than quadrupled in size to about 19 square kilometres, according to Ontario's Ministry of Natural Resources and Forestry.

An additional order was issued Saturday for an area from the western and northern borders of French River Provincial Park, east to the Trans-Canada Highway, and as far south as the south shore of the Key River.

The order affected all residents whose homes are accessible only by boat. Those with road access were placed on evacuation alert, meaning they had to be ready to leave at a moment's notice if conditions were to change.

Provincial police were also "assisting the Henvey Inlet First Nation with an evacuation of their village," according to a release.

OPP cautioned those with travel plans in the area to avoid the Trans-Canada, which in that area is designated Highway 69, if possible.

"Our community is devastated," said Jennifer Kivinen, co-president of the Key River Area Association, which represents a group of seasonal and permanent residents in northeastern Georgian Bay.

Kivinen said she is at her cottage on the north side of the French River and she could see the smoke and damage caused by the forest fires on the other side of the park.

"The impact is huge environmentally," she said. "It is extremely sad if we lose our cottage.... But I just want everyone to be safe."

Key River "is a tight-knit community who has and will continue to assist each other whenever and wherever possible," said Kivinen, adding that some people have opened their doors to evacuees.

"The minute that we don't feel safe anymore we will leave the cottage," Kivinen said. "We will play it by ear."

Isabelle Chenard, a spokeswoman for Ontario's Ministry of Natural Resources and Forestry, said "Everyone who was evacuated was evacuated by boat."

The new fires were ignited by lightning strikes Friday, Chenard said, adding that it pushed the total number of blazes to at least 65 -- 34 of which remain out of control.

There are currently dozens of aircraft -- both planes and helicopters -- being employed to battle the fires.

Ontario fire crews are getting help on the ground from firefighters who have come from across Canada as well as the United States and Mexico to lend a hand.

The ministry is asking people to stay away from water bombers and to refrain from flying drones within nine kilometres of a forest fire.

Wind gusts were expected later Saturday, Chenard said, which could worsen the fire.

But she noted fire crews on the ground and in the air are working from the early afternoon until dark and are dropping water on the fire.

Smoke from Pembroke 5, 6, 7, and 8 will continue to be visible
in Bissett Creek and surrounding areas, along Hwy 17 tonight and well into
tomorrow. pic.twitter.com/tyj64SjmtH