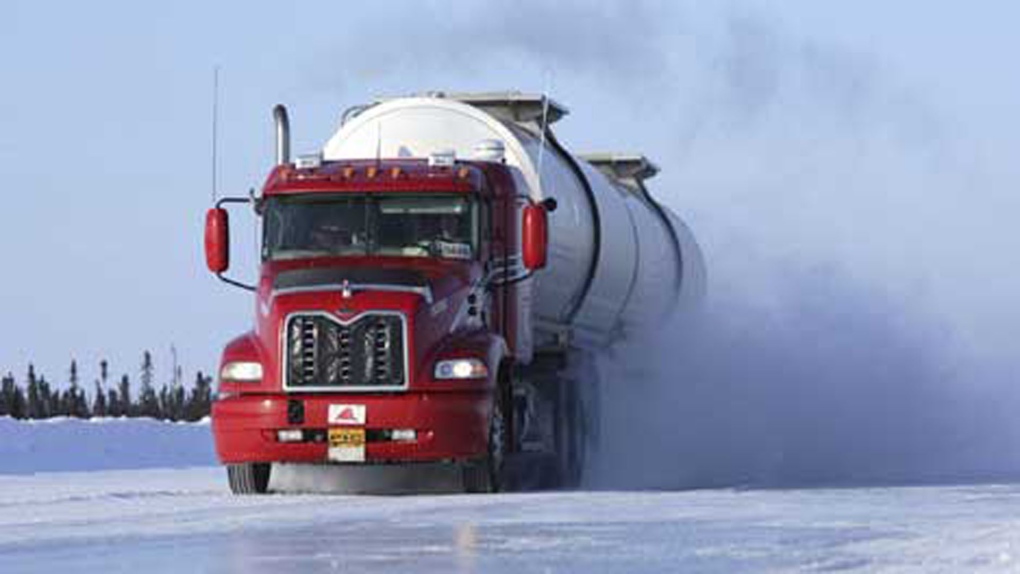 A truck moves down a northern ice road in this undated photo. (The Canadian Press)

MONTREAL -- Canadian Gilbert Cardin worries about the future of the ice road he maintains every winter on a frozen river west of Montreal.

"At some point, it is certain that we will no longer be able to open if these mild winters continue," he tells AFP.

Since February 14, the 900-meter-long path, cleared of snow and marked with fir trees, has allowed motorists to travel between two villages on opposite sides of the Ottawa River without having to drive 40 kilometres roundtrip to the nearest bridge.

Such ice roads -- or "winter crossings" as they're called by Quebec locals -- were once commonplace in these parts.

In the 1800s one even carried the weight of locomotives on a temporary rail line across the Saint Lawrence River between the island of Montreal and South Shore communities on the mainland -- although one steam engine sank into the river.

In southern parts of Canada, seasonal ice roads are now increasingly scarce due to wide swings in winter temperatures -- from deep freeze to balmy -- that make it harder to maintain them.

Only a few dozen of these vestiges of winters of yesteryear remain today in all of Canada and just a handful in Quebec.

Cardin's ice road between Pointe-Fortune and Saint Andrew d'Argenteuil is the only one of three in the Montreal area to open this year.

"This winter we opened a month late," he laments, pointing to global warming and a very mild start to winter this year as the cause.

Under a bright blue sky, the 54-year-old big rig truck driver plunges a chainsaw into the ice in the middle of the frozen river. A stream of ice shavings burst out as he cuts out a block of ice and measures its thickness against markings on the blade: 14 inches (35 cm).

It is thick enough to allow cars to drive across the frozen river, but not trucks. In past winters the ice has usually been as much as one meter (three feet) thick.

He doesn't expect to make a profit this year, given his late start and forecasts of an early spring, which will likely force him to close the ice road in a few weeks.

In the meantime, he must continually plow it over, as snow cover would keep the ice from thickening (acting as insulation from the cold) at a rate of about an inch per day in cold weather, Cardin explains.

"Having an ice bridge open for two months would be an excellent operating season, one month would be very good," comments Claude Desjardins, owner of another ice road further downstream on the river.

He was unable to open his two-kilometre ice road between Hudson and Oka this year, he says, due to "really unsafe" ice conditions. The situation was the same in 2017 and 2018.

"Each year, it's different and you never know what to expect," comments Cardin. His crossing, which he's been operating for 25 years, also remained closed in 2018.

The last decade has seen more frequent warm spells, reducing the average length his ice road is open to an average of five weeks, down from a record 12 weeks in 1997.

He hopes a recent Arctic cold snap will stretch into early March so he can stay open a bit longer, but acknowledges it's a long shot with the current ice thickness at the bare minimum.

"If the ice is not thicker than that, as soon as the warm weather comes, it's all over," he said.

Compounding his weather woes, he said there have been fewer drivers on Canadian roads this year due to public health restrictions to slow the spread of the coronavirus.

"Customers haven't been there because of Covid-19. There's no one on the highways, everyone who can has been teleworking," he explains.

"Who's using the bridge? Construction workers and housekeepers going from place to place, that's it," he said.

These days, barely 30 motorists per day use it, down from 100 normally.

"When I found out it was open today... I said to myself, this is where I'm going," says regular ice road user Eric Deschamps.

He paid $7 (US$5.55) to use Cardin's ice road, avoiding adding 50 kilometres to his trip. "It costs less than gasoline, especially with a pickup," he concludes.