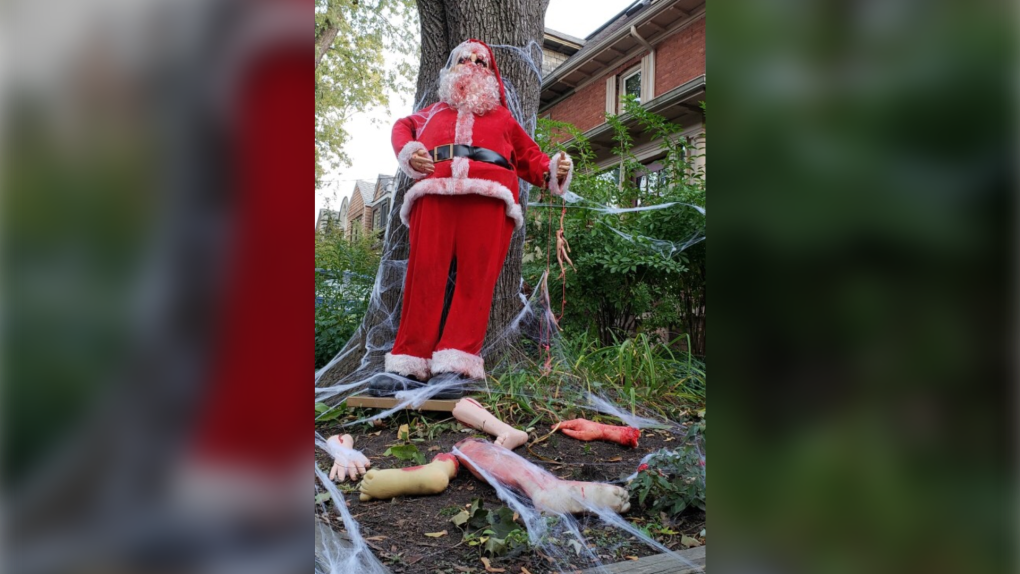 TORONTO -- With its darkened eyes, bloody beard, and dangling limbs, a zombiefied Santa mannequin became the source of a neighbourhood spat after it was left out after Halloween.

Nikolina Nikolova rescued the life-sized Santa figure after it was left out on the street for garbage collection in her Toronto neighbourhood last year. As a self-described Tim Burton fan, she carried it home with the intention of turning it into a zombie for Halloween.

“All of my decorations were inspired by his movies so when I saw Santa Claus, I was like ‘Oh there you go, it’s like ‘The Nightmare Before Christmas,’” she told CTVNews.ca during an interview on Wednesday.

To transform Santa into a zombie, Nikolova used makeup to blacken its eyes and covered its beard and body in costume blood bought from the dollar store.

After last Halloween, Nikolova stored her “Zombie Santa” in the basement of her home in Riverdale so she could use it again for next year’s decorations.

This year, however, Nikolova decided she didn’t want to house Zombie Santa in the basement anymore and she would leave him out on the front yard as part of her family’s Christmas decorations.

“It was too much. It was like storing a dead body down there. Everybody was bumping into him,” she said with a laugh. “I just left him on the front yard. I cleaned up the rest, but I left him. I was like ‘Well, he covers the seasons.’”

Nikolova also said she thought a zombie-themed Santa would be fitting for the holiday season because she thinks shoppers can turn a bit into zombies when they’re running into malls and spending money on “unnecessary things.”

At first, Zombie Santa’s presence in the neighbourhood appeared to be of no significance and it stayed tied to its tree on the front yard unperturbed.

That is, until the weeks went by, and still it remained on Nikolova’s front yard.

Two weeks ago, Nikolova came home from work to find the mannequin ripped off the front tree and unceremoniously thrown onto the front lawn.

“I was like ‘Oh don’t treat Zombie Santa like that’ so I put him back up,” she said.

A few days later, Zombie Santa’s attacker struck again and it was once again tossed asunder on the yard.

When Nikolova put the mannequin back up again, the feud escalated.

Last Thursday, Nikolova said she was at home cooking dinner when an anonymous note was pushed through her front door’s mail slot.

The handwritten note said: “Your neighbours on the street would like you to remove the Halloween Santa. It’s scaring the little children. Much appreciated.” 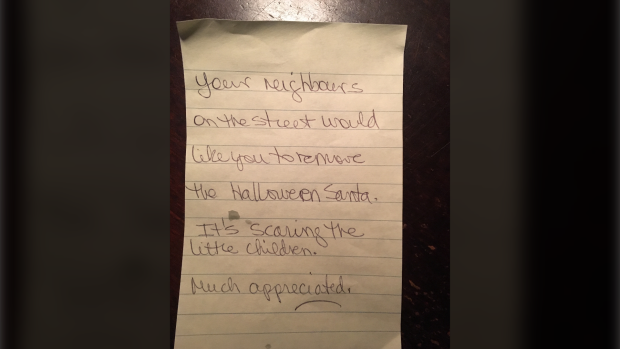 Nikolova said she was upset they didn’t knock on the door and speak to her in person about their concerns.

“I didn’t like the passive aggressive behaviour,” she said. “If you want to be my neighbour and you want to talk to me, I will talk to you. I would have removed the stupid thing.”

In response, Nikolova wrote her own note and stapled it on to Zombie Santa.

“Nobody puts Zombie Santa in the closet,” her note read, channeling the film “Dirty Dancing.”

Nikolova also added at the bottom: “Little children scare him, please keep them away. Much love.” 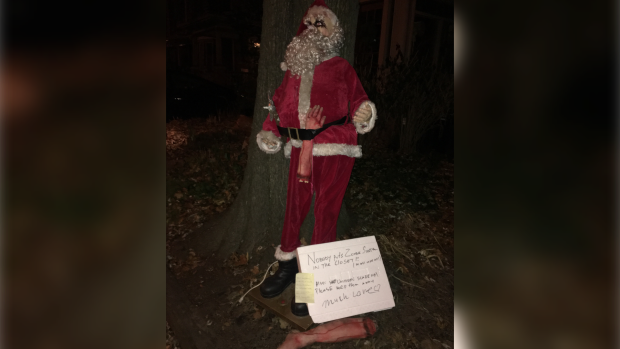 It appeared Nikolova’s note didn’t go over well because on Saturday, Zombie Santa was gone.

“I was at work and my son texted me: ‘Somebody stole Santa. They finally took him,’” she recalled. “And that was the end of Zombie Santa.”

Despite the theft, Nikolova said she was able to have a good laugh at the whole ordeal.

“I think I laughed the most when I came home because they grabbed just the body and then his little boots were still left on the front lawn,” she said. “I laughed so much.”

“I hope that whoever took him is having fun.” 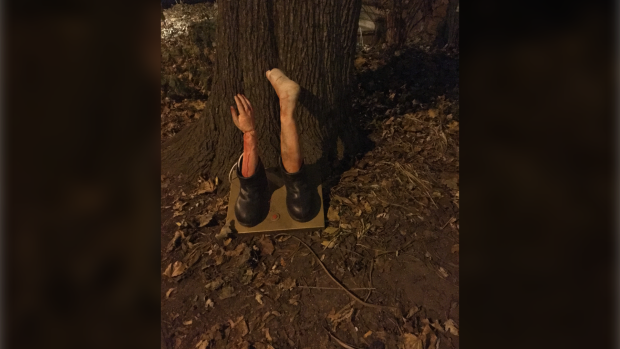