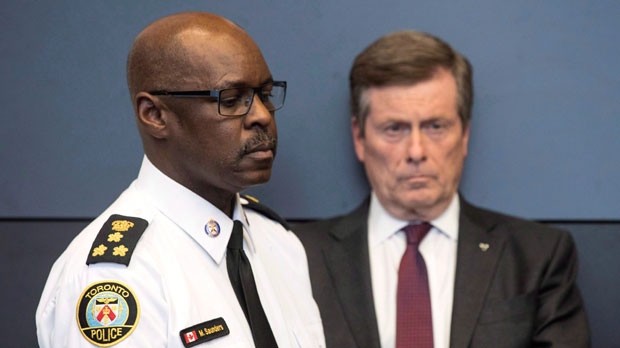 TORONTO -- There are at least 2,700 fewer firearms in circulation in Toronto after a three-week buyback program wrapped up Friday.

Residents voluntarily handed over more than 1,900 long guns and 800 handguns for destruction in what the Toronto Police Service said was the largest haul recorded for such a program in the city.

Mayor John Tory welcomed the reduction in the number of guns on the street.

"Every gun surrendered is one less gun in our community and one less gun potentially available to people who want to cause problems in our city," he said on Twitter.

Tory said the buyback program was just one part of a wider effort to reduce gun violence.

"I have repeatedly said that ending gun violence will take a variety of measures -- there is no one magic answer. This gun buyback program is just one of a number of initiatives we are taking."

Toronto experienced a record 96 homicides last year, including a 30 per cent jump in homicides by shooting from 2017.

Chief Mark Saunders said the buyback program was a success.

"We are pleased with the participation of Torontonians taking steps to safely dispose of unwanted guns in their homes. These guns can present a potential danger if they fall into the wrong hands," he said in a statement.

Under the buyback program, Torontonians were paid $200 for turning over a long gun and $350 for a handgun -- once police determined the weapons hadn't been used in a crime.

Police offered similar compensation during a buyback program in 2008. That year they collected nearly 2,000 guns, 500 of which were handguns.

Unlike some programs in the United States, handovers couldn't be anonymous. But Toronto police said those who turned over weapons wouldn't face charges for possession or for unsafely storing a firearm.

The buyback program, funded by the city, was part of council's adoption of recommendations in Last July's Immediate Steps to Address Gun Violence report.