'She let nothing stand in her way:' Desmond honoured with Walk of Fame star 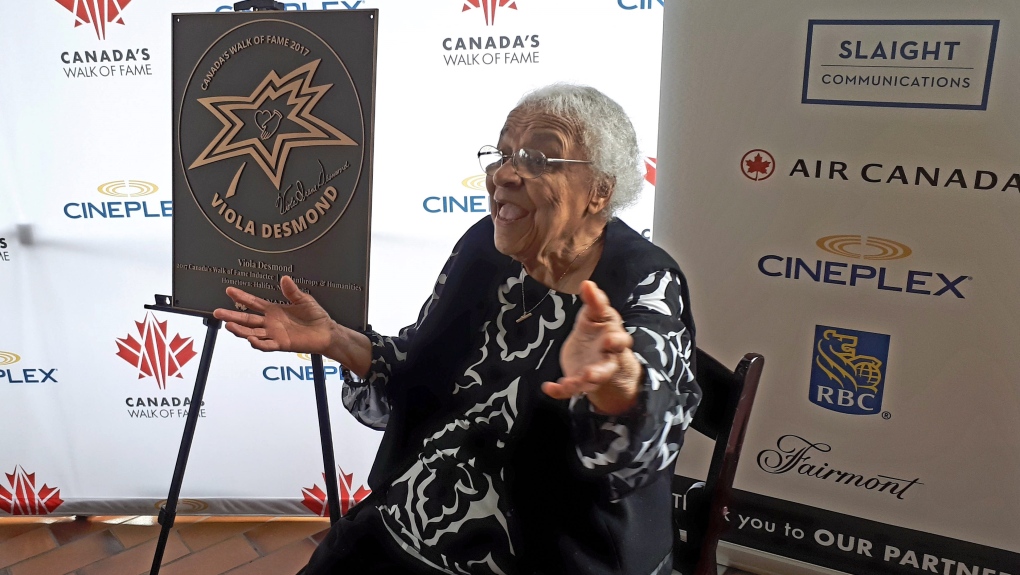 HALIFAX -- Wanda Robson says her sister Viola Desmond "preached by doing," and wanted young people to pursue their dreams regardless of what stood in their way.

Robson beamed as a Canada's Walk of Fame star was unveiled in Halifax Friday afternoon in honour of the civil rights pioneer -- the latest in a series of accolades Desmond has posthumously received in recent years.

The 91-year-old Robson told a crowd gathered at the Halifax Ferry Terminal that her sister fought to overcome the many obstacles in her path to pursue her career: training as a beautician in Montreal, Atlantic City and New York when she was unable to study in Halifax because of the colour of her skin.

"She let nothing stand in her way," said Robson. "It must've been very frustrating. I myself would've probably given up ΓÇª but we are of a different nature, Viola and I."

Desmond is most famous for her refusal to leave the whites-only section of a Nova Scotia movie theatre on Nov. 8, 1946 -- nearly a decade before Rosa Parks refused to give up her seat on a segregated bus in Alabama.

She was dragged out of the theatre by police, arrested, thrown in jail for 12 hours, and fined. It would take 63 years for Nova Scotia to issue Desmond, who died in 1965, a posthumous apology and pardon.

While much has changed in the decades since her sister was dragged out of the theatre, Robson told The Canadian Press that education continues to be key in the pursuit of equality.

"I'm learning myself, every day," she said.

"Racism can be so deep-seated, that sometimes the person themself doesn't know they're racist, doesn't realize that they have to be educated."

Robson, who attended her grandson's graduation ceremony this week, said she has high hopes that future generations will continue the work of her sister and other civil rights activists.

"We need the younger generation to get up and confront, not in a manner of aggression, but in a manner of imparting knowledge, educating the people, that we are all one," she said.

Canada's Walk of Fame has inducted 173 Canadians since it began 20 years ago, including Desmond, who was inducted in Toronto last year.

The commemorative star will soon be mounted aboard the harbour ferry named for Desmond in 2016.

"Years from now when families arrive on this ferry, parents will be able to tell their children about the powerful and brave contributions of Viola Desmond: to civil rights, and human rights, around the world," said Halifax Mayor Mike Savage.

Her story went largely untold for a half-century, but in recent years Desmond has also been featured on a stamp, and there are plans for a park in Toronto and streets in Montreal and Halifax to bear her name.

She is the first black person -- and the first non-royal woman -- on a regularly circulating Canadian bank note.

As well, Desmond is featured in a recent children's book by Chelsea Clinton called "She Persisted Around the World," which tells the stories of 13 women who shaped history across the globe.

Meanwhile, Robson, who has a signed copy of the book, said she's thrilled about her sister's growing recognition.