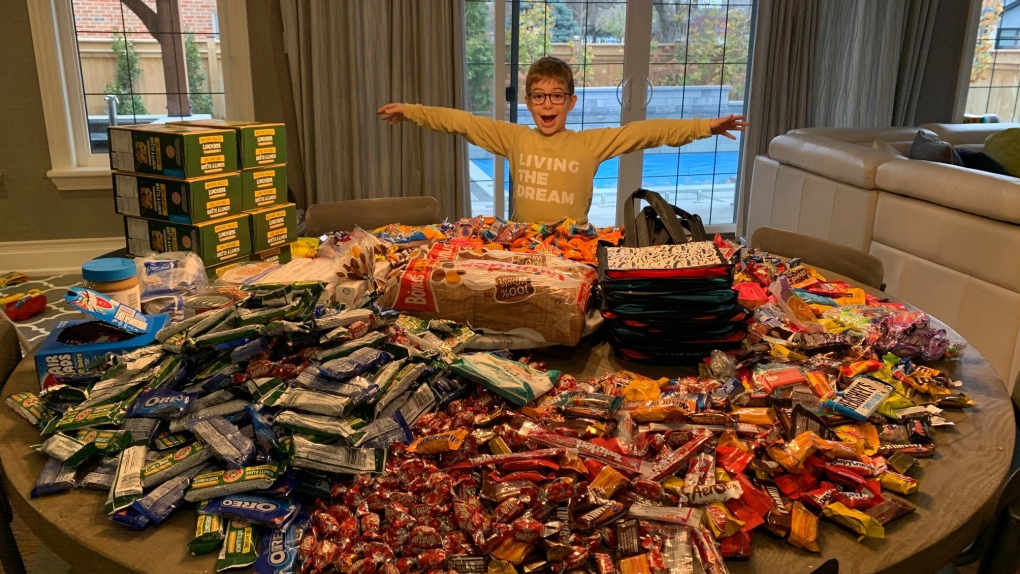 Noah Mercier, 7, poses with the donations they received after his bag of donated Halloween candy was stolen. (Tami Zuckerman-Mercier / Facebook)

TORONTO -- After a bag of candy that a seven-year-old Toronto boy hoped to donate was stolen on Halloween night, his mother reached out on Facebook for advice on how to broach the disappointment with her son.

What she didn’t expect was for the community to respond by flooding the family with donations.

Tami Zuckerman-Mercier told CTVNews.ca in a phone interview that it all started when her son Noah came up with an idea to spread Halloween joy: he would leave an empty bag on the doorstep with a request for donations.

“He made like a really cute sign and he hung it from our mailbox,” Zuckerman-Mercier said, explaining that the sign asked for donations of candy for people in need.

“The idea was to take that bag to a homeless person downtown and to just give them a bag of candy so they could experience Halloween the way that he does,” she explained.

On Halloween, Zuckerman-Mercier stayed at the house to give out candy and take care of their nine-month old while Noah and his father went out trick-or-treating. When it came time to put her daughter to bed, she left the bowl of candy she had been giving out to trick-or-treaters with another sign asking visitors to each take two candies.

She said she was only inside for about 20 minutes, but when she returned to the porch to continue giving out candy, it was clear that someone hadn’t followed the rules: the family’s silver bowl of candy was completely empty.

When she checked their doorbell camera, Zuckerman-Mercier discovered a photo of what “appeared to be an adult woman with three kids behind her … just pouring the candy into her bag.”

But that wasn’t even the most troubling thing, she said.

“Not only did she steal all of our candy, but she stole all of the candy in (Noah’s donation) bag and took off his sign, like ripped it and crumbled it up.”

Zuckerman-Mercier was faced with a dilemma: should she simply fill up the donation bag with more candy and pretend nothing happened, or should she tell her son the truth?

She posed the question to Facebook in a post that included photos of the ripped sign and the alleged thief. But the responses didn’t just contain advice -- people started offering to support Noah’s cause.

“It just turned into this movement from the community that was completely unexpected, but heartwarming, to say the least,” Zuckerman-Mercier said.

When she told Noah, “his mouth really fell to the floor,” she said.

Neighbours swung by with candy donations. Friends and family from Montreal mailed them candy. They even received donations of food, such as bread and granola bars.

One person left a card congratulating Noah on his generous spirit, with $20 in cash to fund his efforts. The family used the money to purchase reusable lunch bags, and packed up individual lunches -- as well as “a whole huge thing of candy per person.” Then they hit the streets of Toronto so Noah could hand them out personally.

Zuckerman-Mercier said that “it was quite an experience.”

She hadn’t been sure how people would react, but the recipients of the packed lunches were “extremely grateful,” she said.

“They shook (Noah’s) hand. They said, ‘God bless you.’ They thought it was really sweet that this little boy wanted to go out of his way to bring them some candy and some lunch.”

In total, they were able to give out 20 full lunches -- far more than Noah’s original goal of bringing some Halloween sweetness to one person.

Noah has been a giving person since he was a toddler, according to Zuckerman-Mercier. She said she first noticed it when Noah was three. After he saw someone asking for money on the street, he asked his mother “if he could give (his leftover) pizza to (a) homeless person, ‘cause, you know, he’s three years old, he didn’t have any money.”

The family also received non-perishable food items in the donations that they later gave to people coming and going from their local Salvation Army.

“It definitely helped me show my son that there really is a silver lining in every cloud,” Zuckerman-Mercier said.

The candy thief was captured by a doorbell camera that only took one picture, which means Zuckerman-Mercier can’t be certain of everything that transpired. She believes the person in the image is the mother of three children in costumes who are visible in the background of the image. As Halloween night was rainy in Toronto, Zuckerman-Mercier hypothesized that this mother could have been trying to wrap the night up early by getting as much candy as possible at once.

However, commenters on the original post suggested that the figure stealing the candy could’ve been a teenager, or even someone who was in need, like the people Noah wanted to help in the first place.

To Zuckerman-Mercier however, the most important thing isn’t the identity or motives of the alleged thief, but the positive reaction from the community.

“I just want to thank everyone for coming up with that idea,” she said, referring to the donations. She hadn’t asked for donations in her original Facebook post, she pointed out. “This was all Noah and the community … it just really all came by surprise.”

It was “pretty heartless,” for someone to crumple up her son’s donation sign, she said, but when she saw the community’s response, it “restored my faith in humanity.

“There’s just a lot more good out there than bad.”