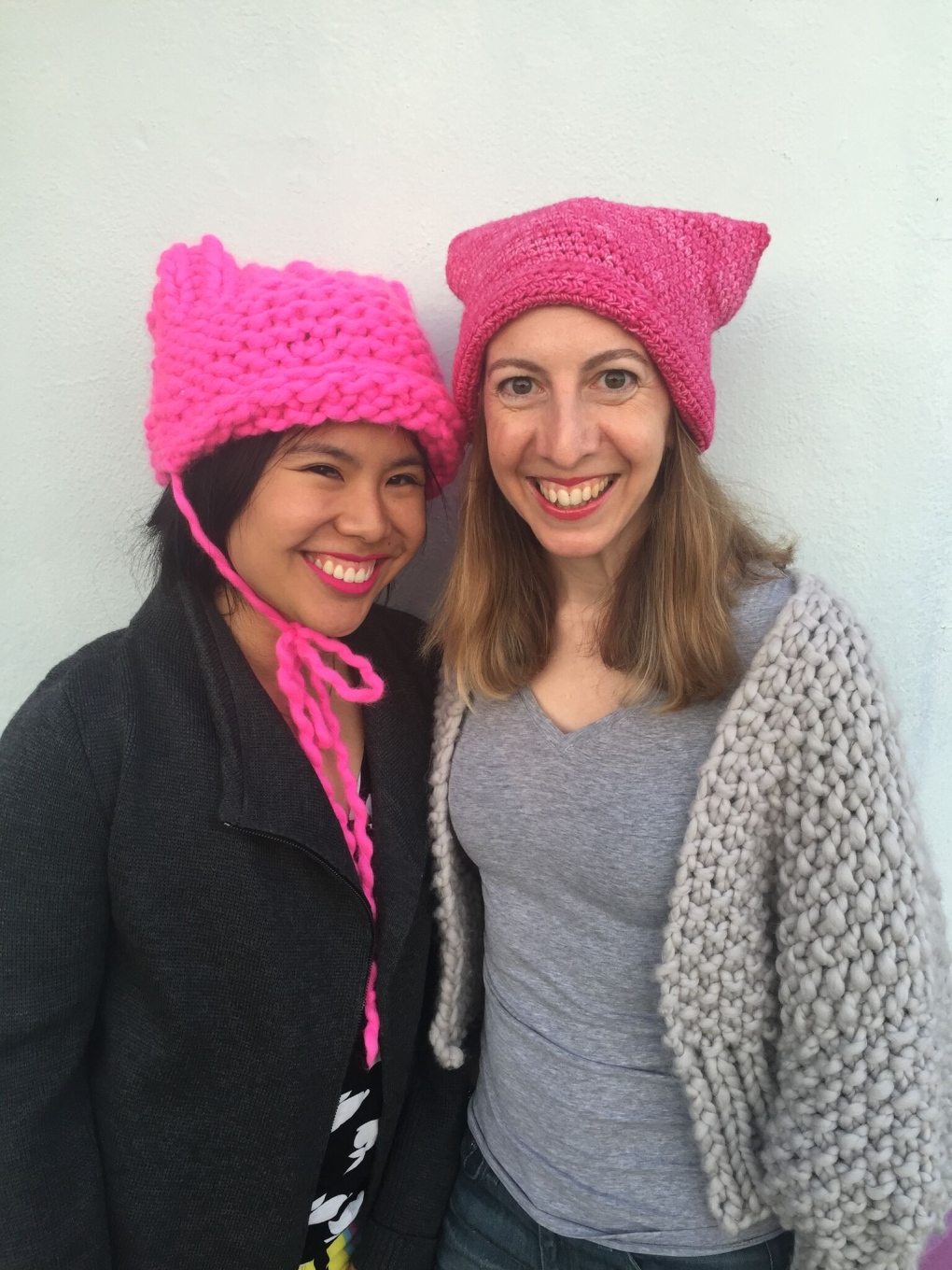 In early January, Jennifer Campbell began to notice an unusual trend in her Toronto knitting shop: Every day, people would come in to the store to request balls of “bright pink yarn.”

Curious, she began asking clients what kind of project they were working on. “It turns out,” she said, “they’re knitting a Pussyhat for the march.”

It appears Campbell’s shop, The Purple Purl, was inadvertently involved in a hat-making movement that is sweeping the U.S. following the election of Donald Trump as president.

Thousands of knitters are creating pink cat-shaped hats for those planning to attend a women’s march on Washington D.C. on Jan. 21, the day after Trump’s inauguration.

While some U.S. knit shops are reporting a shortage of pink yarn ahead of the march, some stores north of the border are noticing an uptick in fuschia-coloured yarn purchases.

“It’s been really popular, we’ve had to restock on pink yarns,” Campbell told CTVNews.ca, adding she’s heard of “a lot of people who are actually going on bus trips” to D.C. in order to participate at the National Mall.

The aim of the hat movement, says Jayna Zweiman, the L.A.-based co-founder of the Pussyhat Project, is to ensure that there is a sea of pink hats at the march on Washington.

In an interview with CTVNews.ca, Zweiman said the hats are an “incredible opportunity to create an advocacy project.”

The hats were inspired in part by crude comments Trump made about women to then-entertainment show host Billy Bush years ago. The lewd comments, which were caught on tape and leaked just weeks ahead of the U.S. election, sparked outcry across the U.S. and beyond. Trump later apologized, but also tried to dismiss the comments as “locker room talk.”

As preparations were being made for a march, Zweiman and co-founder Krista Suh came up with the idea to knit hats. L.A. knit shop owner Kat Coyle designed a hat in support of women’s issues. She came up with a knitting pattern, and the Pussyhat Project was officially launched over U.S. Thanksgiving weekend.

The message behind the hats has resonated with Melanie Antweiler, a Vancouver resident who is knitting Pussyhats for friends and family, including her young son. She plans to attend a solidarity march in Vancouver, and will be mailing some hats to friends who have requested them.

“I like the message: It’s solidarity, it’s equality, it’s taking back what had become a really grotesque word and reclaiming that,” said Antweiler, whose grandmother and aunt taught her to knit. “I also love that this involves women’s work. (Knitting is) something that’s traditionally undervalued, it’s a handicraft.”

Zweiman is blown away by how the project has spread, to the point where stores in the U.S. are reporting an apparent shortage of hot pink yarn.

“A lot of people have said that they didn’t really know what to do after the election, and this has given them a really great outlet to do something … in a positive and creative way,” Zweiman said of the Pussyhat Project. “We’ve heard people saying that doing the (knitting) project has taken them out of a depression, which is incredible.”

Featured on the Pussyhat Project website, the pattern features fuschia pink yarn and is distinguished with two points at the top, which resemble cat ears. Pussyhat knitters sending a hat to a marcher are encouraged to send a note with the hat that includes their name (although they can remain anonymous), as well as a women’s issue they care about.

Zweiman said many people who can’t attend due to illness or for financial reasons are knitting the hats to send to those who are marching in D.C. or one of the many “sister marches” happening simultaneously across the nation on Jan. 21.

“A lot of people are like, ‘I’m in the eighth month of my pregnancy, I can’t travel, but my hat will be marching for me,’” Zweiman said.

The buzz over the hat-making project appears to be spreading north, where some crafts shops in Ottawa, Montreal and Winnipeg are anecdotally reporting a slight uptick in pink yarn sales.

It may just be coincidence, but The Purple Purl’s Campbell said she’s heard from a lot of people who are joining bus trips from Toronto to D.C. in order to attend the march. Others who aren’t attending are either knitting or collecting the hats in Toronto, with plans to send them along to the march, Campbell said.

As march day draws closer, Campbell said, customers are coming in to ask for thicker yarns, which are used to get projects done quickly if pressed for time.

Zweiman said she hopes the march and the hats are “creating infrastructure” for future political activists.

People, she said, are coming together for the first time in a while and “talking about women’s rights, which I think is very much at the heart of this project.”

I dropped in on a #pussyhat knitting circle organized by @thread.winners in Riverside, CA! Liz and Alyssa are amazing artists - it was a joy to meet them, and I am so grateful they've joined the @p_ssyhatproject movement!!! It was so smart to host a knitting circle in this adorable coffee shop!