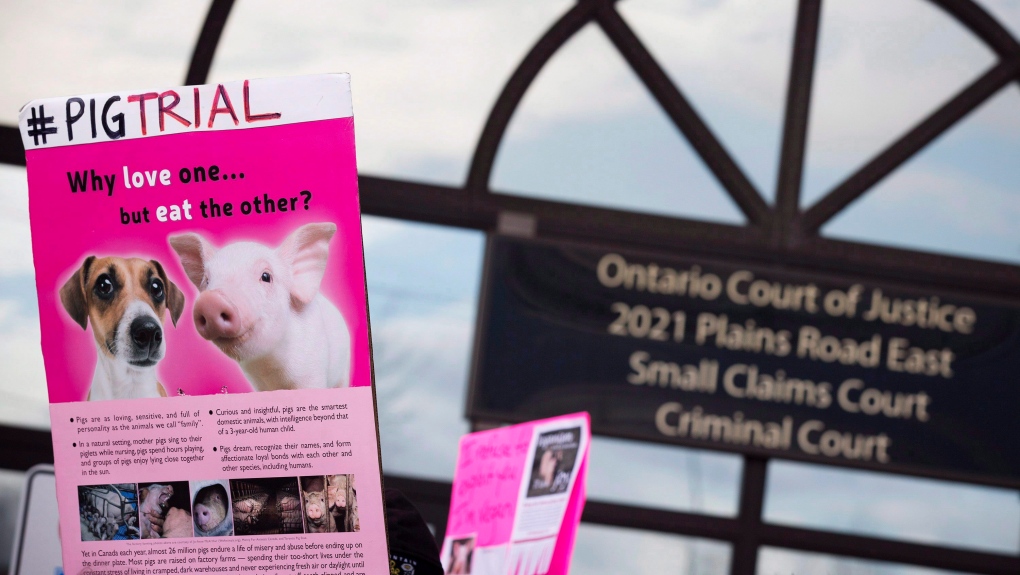 Demonstrators gather outside of a Burlington courthouse ahead of closing arguments in the case of Anita Krajnc, who was charged with mischief after giving water to pigs on their way to slaughter, Thursday, March 9, 2017 in Burlington, Ont. (THE CANADIAN PRESS/Aaron Lynett)

TORONTO -- New legislation introduced Monday in Ontario would create so-called "animal protection zones" with increased fines for trespassing -- a move applauded by farmers but roundly criticized by the animal rights activists who say it targets them.

Agriculture Minister Ernie Hardeman said the bill -- dubbed the Security from Trespass and Animal Safety Act -- would hike fines for trespassing on farms and food-processing facilities and make it illegal to obstruct trucks carrying farm animals.

The legislation comes after livestock producers pressed the government to take action to prosecute those who trespass on their properties and demonstrate at processing plants.

"Ontario farmers and agriculture workers deserve to be able to carry out the important work they do without fear for their safety," Hardeman said. "These are the people who produce the food we eat every day, and I've reflected on their experiences and concerns when drafting this proposed bill."

Under the legislation, fines for trespassing would be set at a maximum of $15,000 for a first offence and up to $25,000 for subsequent offences, compared to current maximum trespassing fines of $10,000.

The bill would also allow a court to order restitution for any injury, loss or damage caused as a result of an offence.

The proposed law would also increase protection for farmers against civil liability from people who are hurt while trespassing on their property.

Hardeman said the proposed law would help ensure the biosecurity of the province's food supply while also striking a balance which ensures the right to protest.

"People have a right to participate in legal protests, but this does not include trespassing on farms and agriculture businesses or interfering with livestock in transport," he said.

Ontario Federation of Agriculture spokesman Keith Currie said the farming community has been dealing with aggressive protests for years, and action was needed.

"As farmers, we respect the right of people to protest, however, when it encroaches on private property, endangering the safety of families, (and) farmers, ... something needs to be done," he said.

The executive director of animal protection group Animal Justice, however, said the legislation is "utterly chilling" and would restrict free speech if it becomes law.

Camille Labchuk said the bill would also make it illegal to gain access to a farm or processing plant under "false pretenses." That would mean animal rights groups could not expose cases of abuse by using whistleblowers.

"For someone who gets a job and doesn't disclose membership in an animal rights group, that could be an offence potentially punishable by huge fines," she said.

Anita Krajnc, founder of the vegan advocacy group Toronto Pig Save, said part of the new bill seems targeted at just a few animal rights groups, including hers.

In 2015, Krajnc gained notoriety after being charged for giving water to pigs on their way to slaughter. She fought the mischief charges all the way to trial, where she was found not guilty because a judge found she didn't harm the animals or prevent them from being slaughtered.

The new bill proposes to prohibit "interfering or interacting with farm animals being transported by a motor vehicle without explicit prior consent," the government said.

Krajnc, who has been "bearing witness" to animals in transport trucks on their way to slaughter since 2011, said she's not about to stop now.

"Bearing witness is about interacting and not looking away and looking into the faces of pigs, cows and chickens that are about to go to slaughter," Krajnc said.

"We'll continue to bear witness, stop trucks and give water to thirsty pigs, caress them and tell their story."

Alberta Premier Jason Kenney has said free speech must be protected, but when protesters trespass, create mischief and pose potential biohazards the government must act.

-With files from Liam Casey.