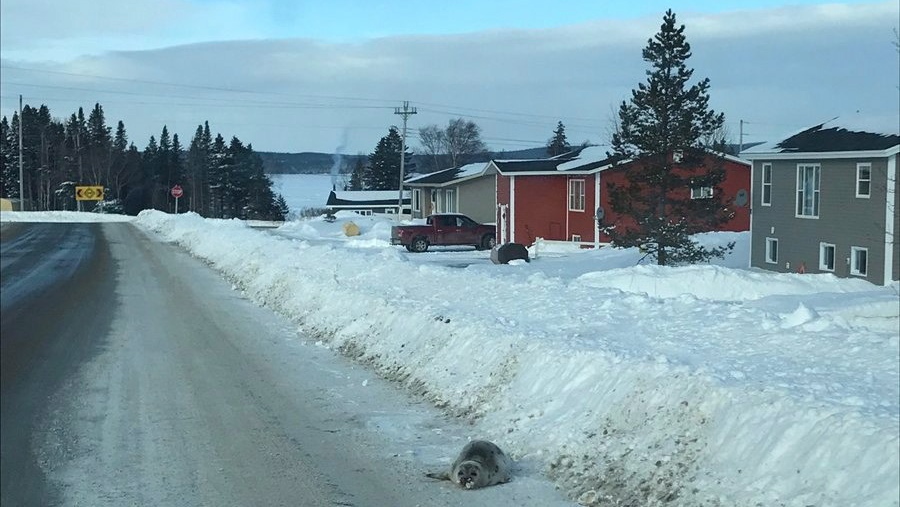 A seal is shown on a road in Roddickton, N.L. in a handout photo. THE CANADIAN PRESS/HO-Brendon Fitzpatrick MANDATORY CREDIT

RODDICKTON, N.L. -- Seals have been swarming the streets of a northern Newfoundland town, with residents fearing for the animals' safety but being warned to stay away.

Brendon Fitzpatrick of Roddickton said seals had been spotted in the area as early as October, but in recent weeks the animals have wandered into town, sometimes in the middle of the road.

Images posted to Fitzpatrick's Twitter feed show the seals crawling along town streets, swimming in a brook and climbing a snow bank near a gas station.

"People chase them, people 1/8are 3/8 there every day on snowmobiles stopping and looking at them, and the animals, they won't move from you," he said Monday.

Fitzpatrick has seen the animals in groups of two or three and more than 20, and expressed concern that the animals could be injured by vehicles or curious onlookers.

The ice has frozen, making it nearly impossible for them to swim back to the open ocean.

Fitzpatrick said he hopes the federal Fisheries Department will be able to step in and bring the seals back to the ocean.

"Nobody likes to see something in a place where they're trapped in," Fitzpatrick, a former hunting and fishing guide, said in an interview.

"You gotta wonder if they're going to survive or why the Fisheries Department don't do something to take them out."

The Fisheries Department issued a statement saying the situation is being monitored and reminding people that it is illegal and dangerous to disturb a marine mammal.

"Seals are wild animals that can be unpredictable, and may become aggressive in order to protect themselves. In rare cases, seals carry infections that can be passed on to humans," the statement read.

"We would like to remind people that it is illegal to disturb a marine mammal and human interaction can disturb an animal's normal life processes and can result in injury or death of the animal."

Fitzpatrick said this law puts residents in a bind, however, because the seals are often on public roads where they could be hurt.

"It's hard to stay away from them sometimes, there might be one in your driveway," Fitzpatrick said.

"People are worried about touching them, about taking one and moving them from the road because you don't know if the Department of Fisheries is going to charge you if they come."

Earlier this year, a harp seal that charmed spectators on a Newfoundland beach was found dead a few days later.

At the time, Fisheries officials warned the public against touching seals as they can become scared and lash out.