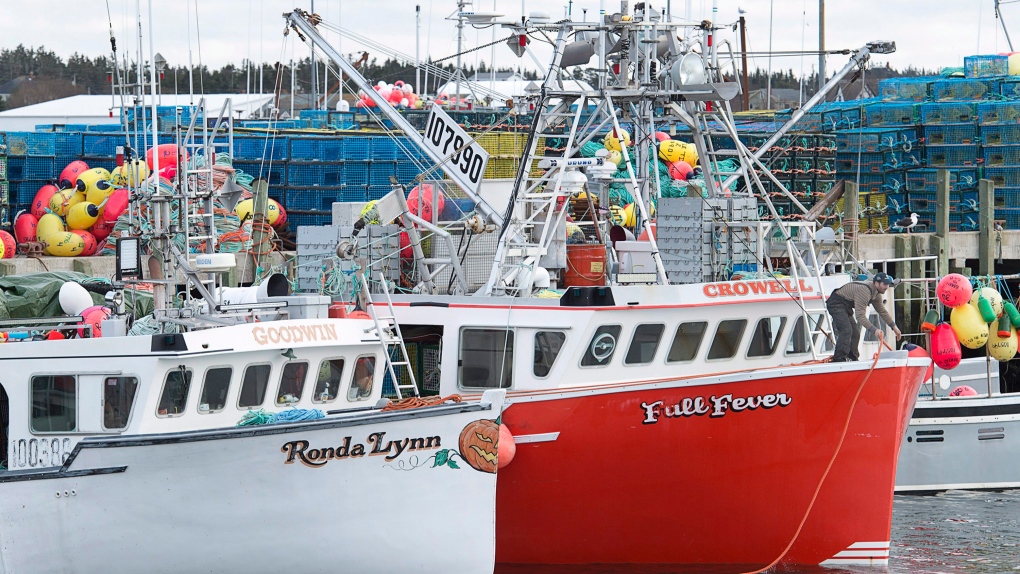 A fishermen ties a line as he prepares for the lobster season in Woods Harbour, N.S., on Saturday, Nov. 26, 2016. (Andrew Vaughan/The Canadian Press)

HALIFAX -- On the last Monday of November, lobster fishers sail into the sunrise peeking over the waters off southern Nova Scotia, boats teeming with stacks of cages, coiled lines and buoys inscribed with permanent marker.

They call it "Dumping Day" -- the seasonal kickoff to the crustacean catch in what is widely considered to be the most lucrative lobster regions in the country.

This year, around 1,700 boats are set to steam off for favoured fishing grounds, trailed by trawls of up to 15 traps strung together like Christmas lights that sink to seabed in their wake.

Come Monday, however, the fleet of ships may float idly in their ports as the decades-old tradition is expected to be docked -- at least for 24 hours -- by blustery forecasts.

Safety is of the utmost importance to today's lobster fishers.

And safety holds special significance for old-timers to whom the precautionary measures are a mournful reminder of sailors who paid the ultimate price in pursuit of Canada's most valuable sea-dwelling commodity.

Spinney is a member of the body that oversees Lobster Fishing Area 34 (LFA 34) in southwestern Nova Scotia -- an approximately New Jersey-sized body of water that has the largest catches of Canada's 41 lobster fishing districts. Canada's billion-dollar lobster business remains the most lucrative fishery the country and a crucial economic engine on the East Coast, employing about 30,000 harvesters in the Atlantic provinces.

Spinney, who is coming up on his 60th Dumping Day, says in his early years, fishers would set out to sea in up to 130 kilometre per hour winds, restricted only by time and nautical nerve. He says the rules have since changed to only allow boats to set sail if the weather permits safe travel.

Contingencies like this have likely spared lives in recent years, Spinney says, but still today, every angler risks life and limb upon exiting the harbour.

Last year, a 53-year-old man from Cape Breton died on Dumping Day after falling overboard while setting lobster traps in the waters near Yarmouth, according to RCMP.

A spokesperson for the Department of Fisheries and Oceans says the Canadian Coast Guard will have additional crews stationed near the fishing grounds and a Cormorant helicopter on standby in case anything goes awry this year, and Nova Scotia's labour minister issued a statement last week urging fishers "to keep safety top of mind" throughout the six-month lobster season.

Hubert Saulnier, a 47-year veteran of the lobster harvest, says Dumping Day can be "nerve-wracking" from its 6:00 a.m. start to the multi-trip haul over the following days.

As the lobster hunt gets underway, harbours are congested with boats racing to lay claim to prime fishing spots, says Saulnier, each marking its territory with a batch of buoys scribbled to distinguish them from hundreds of others. Thousands of crew members take part in the cull, many of them jittery and inexperienced, he says, so a captain must keep firm control of his ship to make sure no one gets hurt.

Danger comes from above and below during the 12-hour expedition, according to Saulnier.

The towering equipment lurches as the boat rolls in the rough waters, threatening to send someone onboard. Crew members must sidestep lines whizzing by at breakneck speeds, traps plunging into the waves in quick succession. Saulnier says the trawls are weighted down by 40-kilogram anchors on either end, so if someone's foot gets entangled, a person could be pulled down into the ocean depths -- even while wearing a life vest.

After setting hundreds of baited traps, the boats returns to the wharf -- only to load up with more gear and do it all again.

The true reward comes after "the dump," Saulnier says, as fishers fetch their traps to see what treasures they have ensnared.

"It's all an element of surprise because one year can be better than the next," Saulnier says. "It's hit and miss, but you do the best you can."

Saulnier says he and the approximately 950 other licence holders in LFA 34 are hoping for a repeat of last season's bounty. More than 3,000 fishermen and deckhands in the area scooped up about 60 million pounds of lobster last year at prices averaging between $6.60 and $6.70 per pound, generating about $400 million in landed value.

As profit potentials in LFA 34 have skyrocketed, so too have the costs of fishing, says Spinney. The 73-year-old grandfather says he paid a quarter for his lobster fishing licence in 1957, which today can run into the hundreds of thousands of dollars.

The high price of entry makes it harder for "younger fellas" to break into the business, says Saulnier, and he suspects there may be an industry "crash" on the horizon.

But that, like so much else in lobster fishing, is for Neptune to decide. In the mean time, both Saulnier and Spinney have passed on the trade to the next generation, just as they inherited it from their fathers.

Grounded by a hip injury, Spinney is handing the helm over to his son this year, while Saulnier and his kin plan to sail in separate vessels when Dumping Day comes.

"There's something about fathers and sons fishing on the same boat that sometimes works, and sometimes it doesn't," says Saulnier. "Him and I get along excellent as long as we don't work together. I had the same problem with my dad."