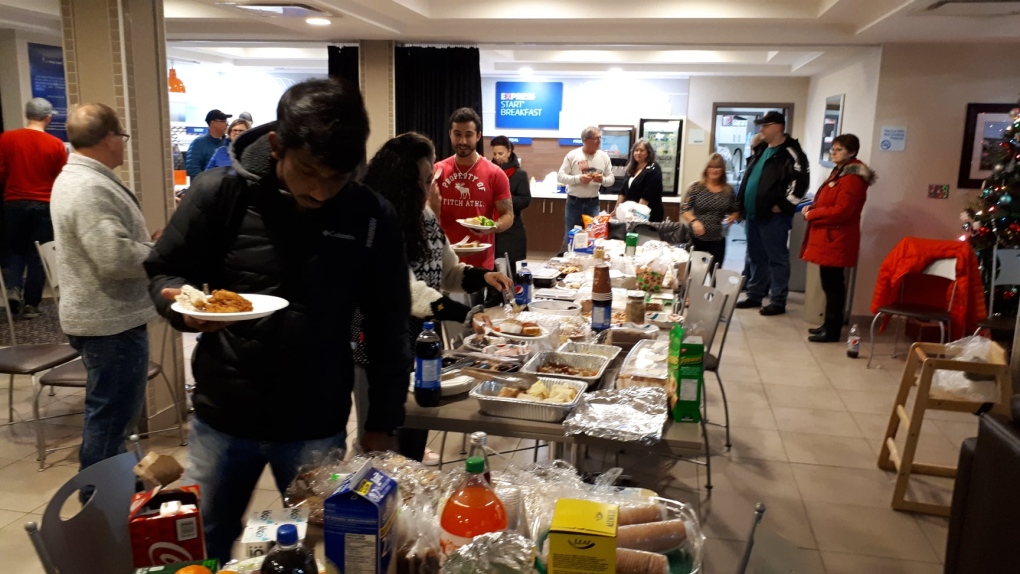 The community of Deer Lake, N.L. came together to feed approximately 80 WestJet passengers who were stranded in the town on Christmas Day. (Facebook/Brian Snow)

TORONTO -- A small community in Newfoundland came together to feed approximately 80 WestJet passengers who were stranded in Deer Lake on Christmas Day due to bad weather.

The WestJet flight to St. John's from Toronto was diverted to the small town located over 600 kilometres from Newfoundland and Labrador's capital early Wednesday morning because of high winds.

While some of the passengers were able to get on another flight that morning, approximately 80 others were stranded at the town's Holiday Inn Express until later that night.

Major Jeff Howard with the Deer Lake Salvation Army said they heard about the situation from a local resident who is a friend of one of the passengers.

In a telephone interview with CTVNews.ca, Howard said the Salvation Army's community services co-ordinator Brian Snow made a callout on social media to organize efforts to feed the passengers.

With it being Christmas Day, all restaurants and shops in the town were closed. The hotel the passengers were staying at also did not have a restaurant.

"There are 75 to 80 passengers who have been stranded at the hotel who has had nothing to eat since last night," wrote Snow in a Facebook post. "Since nothing is open and there is no restaurant at the Holiday Inn, we need sandwiches, leftover turkey and food items to help these passengers… Let's show the true Christmas spirit."

He said that within an hour there was enough volunteers and food to create a potluck in the hotel lobby. He said residents brought sandwiches, cookies, plates full of their own turkey dinners and more.

"The fact that is was Christmas Day was probably motivating for some people," said Howard. "There was so much food I think the passengers even took some for the plane."

A few community members also provided rides back to the airport after the meal. The passengers were able to depart for St. John's by approximately 9 p.m. local time.

While Howard said he was surprised by the outpouring of support from the community, he admits that it isn't out of the ordinary for the region.

"This is Newfoundland; this is part of our culture here," he said. "It's a small community but we often come together when others are in need."

The situation is reminiscent of when Gander, N.L. residents opened their homes to stranded airline passengers following the Sept. 11 attacks in the U.S. The event served as the inspiration for the Tony Award-winning musical Come From Away.