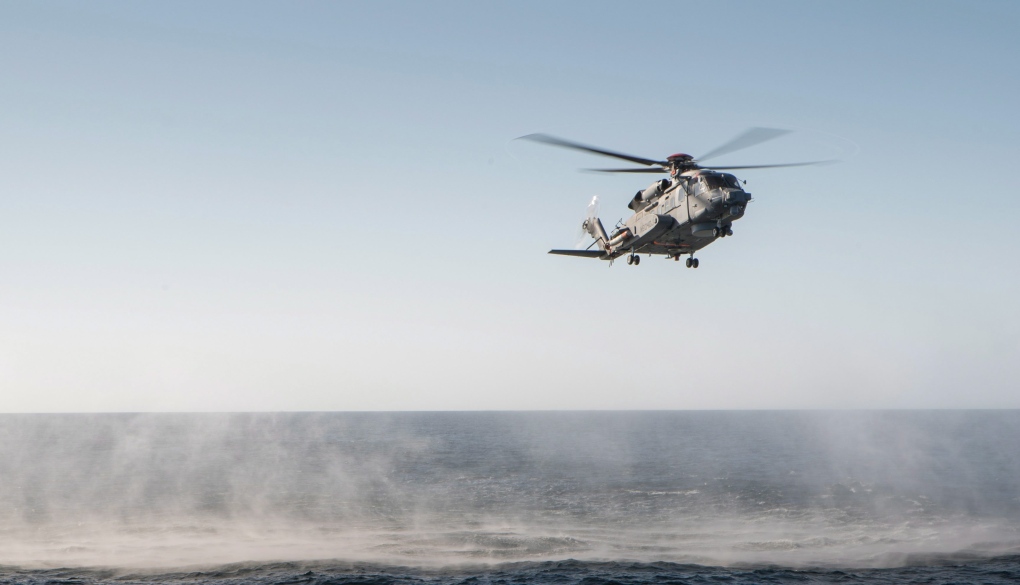 A CH-148 Cyclone hovers over the Atlantic during sea trials off the coast of Nova Scotia on April 18, 2015. (Jacek Szymanski/THE CANADIAN PRESS/HO - DND)

HALIFAX -- The Royal Canadian Air Force has resumed limited flights on its new Cyclone helicopters after a software problem grounded the aircraft for nine weeks and created delays in training air crew.

Col. Peter Allan, wing commander of the Shearwater base in Halifax, said Tuesday the fleet of three CH-148 helicopters resumed training flights on May 15 after ceasing flying on March 12.

The Sikorsky-built Cyclones are the much-delayed replacements for the Sea King helicopters, which remain in service after more than a half-century but are scheduled to be retired next year.

Allan said it will take about six months to fix the software glitch that caused a computerized flight control system to momentarily restart and sent the aircraft into a sudden and brief loss of altitude on March 9.

Described originally as a "severe bump," the problem corrected itself and the pilot safely landed the plane.

Allan says while the software redesign is underway there are some limits on operations of the Cyclones, but he adds they won't affect the ability of air crew to continue most training requirements.

He said air crews can still train on operations such as landing on ships, hoisting materials, and simulating rescues.

He described the limitations as complex technical issues difficult to put into terms a layperson can understand.

"It's more about modes of the computer they can employ while in particular flight mode ... at the end of the day, it doesn't affect our ability to do training and operational testing and evaluation," he said.

Allan said air crew training for the Cyclones has been set back one month by the grounding of the three helicopters, but this won't stop the helicopters and crews from meeting a previously announced schedule.

The wing commander said he still expects the new navy helicopters to be certified for operation -- meaning they can carry out missions -- starting the end of April next year. The Sea Kings will start ending their flights in June and be fully retired by the end of 2018.

"We've kept some flexibility in the schedule, knowing this is a developmental aircraft. We expect some issues to arise as we go through implementation," said Allan.

"There is still enough flex in the schedule to meet our timelines."

The plan is to begin receiving six completed Cyclones by June 2018 and approximately one helicopter per month after that as the Sea Kings wrap up their duties, he added.

Delays in delivery of the Cyclone helicopter are a sensitive issue, as it is years behind its original projected delivery date and the Sea Kings have some limits on the kinds of missions they can carry out due to their age.

Allan also confirmed "there's been talk," about delamination of the rotor blades on the new helicopters.

However, he said "it's not an issue that's been impacting the wing (command) at this point."

"I know Sikorsky is looking at the rotor blades to see if they need to do something differently, but it's not had an operational issue at this point."

The Sea Kings the Cyclones are scheduled to replace are currently more than 50 years old, and are still the naval helicopter used to support Royal Canadian Navy ships in surveillance and security.