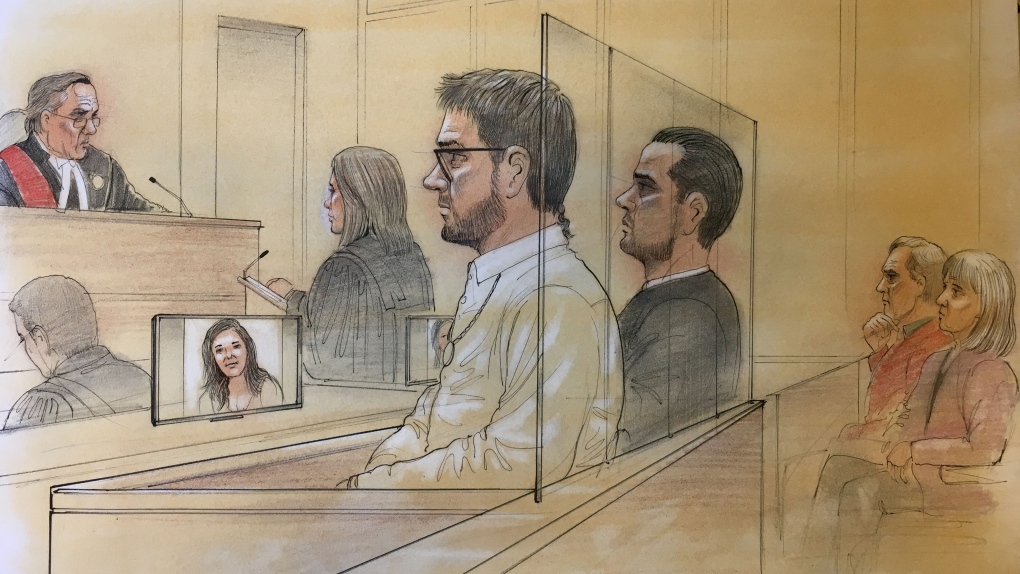 Dellen Millard, Mark Smich and the parents of Laura Babcock (seated on the far right) are seen in this court sketch.

TORONTO -- An Ontario man found guilty of killing a young Toronto woman who vanished five years ago is appealing his first-degree murder conviction and sentence, saying the verdict was unreasonable and the sentence too harsh.

Mark Smich, 30, of Oakville, Ont., and his friend Dellen Millard, 32, of Toronto, were found guilty in December of murdering Laura Babcock, with a judge ruling last month that the pair would not be eligible for parole for 50 years.

The 23-year-old Babcock disappeared in 2012 and her body has not been found. The pair's trial heard Millard and Smich burned her body in an animal incinerator days after she went missing.

Millard and Smich have also been convicted of killing Tim Bosma -- a Hamilton man who went missing in May 2013 after going with the pair for a test drive of a truck he was trying to sell online.

The judge in the Babcock trial ordered life sentences in the two murder cases to be served consecutively, leading to the 50 year parole ineligibility period.

Smich's grounds for appeal, written in four bullet points, all in capital letters, reads: the "verdict was unreasonable; misapprehension of the evidence; errors of law;" and "consecutive sentence too harsh."

"The appeal is expected," Linda Babcock told The Canadian Press. "I don't think he's going to get very far."

Appeal Court documents show Smich filed his inmate notice of appeal on Feb. 27, one day after a courtroom erupted into cheers and a standing ovation as he and Millard were sentenced for Babcock's murder.

At a sentencing hearing, the Crown said the pair's true motive for Babcock's death was to satisfy an urge to kill.

During sentencing, Justice Michael Code said "Smich was enthusiastically involved in the murder of Laura Babcock."

He said Smich's motivation to commit both Babcock's and Bosma's murders "is tied up with his apparently determined efforts to adopt a gangster persona and with his adherence to a broader general criminal conspiracy with Millard."

Millard has not yet filed an appeal in the case, but his lawyer, Ravin Pillay, said his client will appeal both the conviction and the sentencing decision.

Both Millard and Smich are also appealing their convictions for the murder of Bosma.

Millard alone is set to face another first-degree murder trial in late May for the death of his father, aviation heir Wayne Millard. Police initially deemed his death a suicide in November 2012. That trial will be heard by a judge alone.