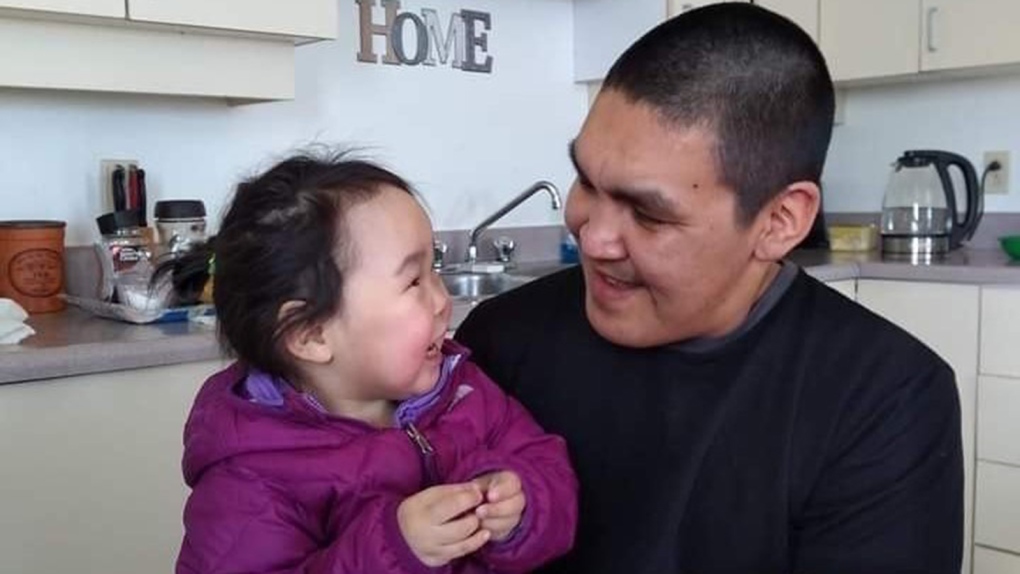 Abraham Natanine, who was shot and killed by police in May 2020 at the age of 31, sits with his daughter in Clyde River, Nunavut in this undated handout image. (THE CANADIAN PRESS / HO-Michelle Illauq)

IQALUIT -- The spouse of a Nunavut man shot and killed by RCMP last year says she wants to see the report on the investigation into his death.

The Ottawa Police Service issued a statement earlier this month on its independent investigation into the shooting, which found the officers involved not criminally responsible for Abraham Natanine's death.

Natanine, 31, was shot after two officers responded to a domestic disturbance at his home in Clyde River on the night of May 5, RCMP said.

Michelle Illauq, Natanine's spouse and the mother of his two children, was there that night.

In a statement through her lawyer, Qajaq Robinson, Illauq said she remembers the situation differently than the RCMP.

"What they said happened isn't what I remember," she said in the statement, which didn't provide any details about the night.

Illauq said she also has not seen the investigation's report and only found out about its conclusion through the news.

"I want to see the reports and the statements. When they killed him, it shattered so many lives," she said.

"It's impossible to find peace without answers."

Nunavut Mounties have given few details on the circumstances around Natanine's death. A release from the RCMP issued a week after the statement from Ottawa police said the situation "escalated" when Natanine went to retrieve a weapon, but the RCMP has not said what that weapon was.

Nunavut RCMP currently has an agreement with Ottawa and Calgary police to investigate serious incidents involving officers. That agreement does not require their reports to be made public.

"We're continuing to pursue access to the reports," Robinson said.

Since Jan. 1, 2020, there have been six serious encounters involving police in Nunavut, including the shooting deaths of Natanine and Attachie Ashoona in the hamlet of Kinngait.

Earlier this year, Ottawa police cleared the officer who shot and killed Ashoona as well as the officer who knocked down a Kinngait man with a truck door during an arrest.

Nunavut RCMP said they won't comment further on Natinine's shooting because they anticipate there may be other reviews.

In December, Nunavut's justice minister introduced a bill that would open the door for civilian oversight of RCMP in Nunavut. The bill, as it stands, still leaves the option open for police forces to conduct third-party investigations.

The bill has passed second reading and is being reviewed by Nunavut's standing committee on legislation.