Hundreds of Americans are still trying to enter Canada for shopping, recreation: CBSA

OTTAWA -- As Canada and the U.S. move to extend the border closure by another month, more than 12,000 Americans have been turned away at our shared border — and almost half of them were coming to Canada to sightsee, shop or have some fun, despite the ongoing pandemic.

According to the latest figures sent to CTVNews.ca by the Canada Border Services Agency (CBSA), 12,819 U.S. citizens have been turned away from our shared border between March 22 and August 5.

More than a quarter of them were barred from entering after revealing they were coming to Canada to sightsee.

While more than 6,000 U.S. citizens were turned away for undisclosed “other” reasons, a total of 3,658 Americans were trying to come to Canada for "tourism" or "sightseeing" — an almost 1,000-person increase from the July 12 total of 2,840 U.S. citizens being turned away at various ports of entry after sharing they were just hoping to take a peek at Canada’s tourist attractions.

In addition to that, more than 1,500 of the Americans Canada has turned away cited "recreation" as the reason for their visit, while more than 600 said "non-essential shopping" was what awaited them on the Canadian side of the border. Both these figures represent a continued uptick from last month, when more than 1,300 fun-seekers and more than 500 shoppers were turned away.

Canada shut its borders to foreigners in mid-March, initially exempting U.S. residents from the new rules. But within days the Canada-U.S. border had also shuttered to all non-essential travel, an agreement that the government announced Friday would be extended to Sept 21.

"We will continue to do what's necessary to keep our communities safe," Public Safety Minister Bill Blair said in a tweet, announcing the extension of the border closure agreement.

The current agreement has exemptions in place for the flow of trade and commerce, as well as temporary foreign workers and vital health-care workers such as nurses who live and work on opposite sides of the border. However, tourists and cross-border visits remain prohibited. 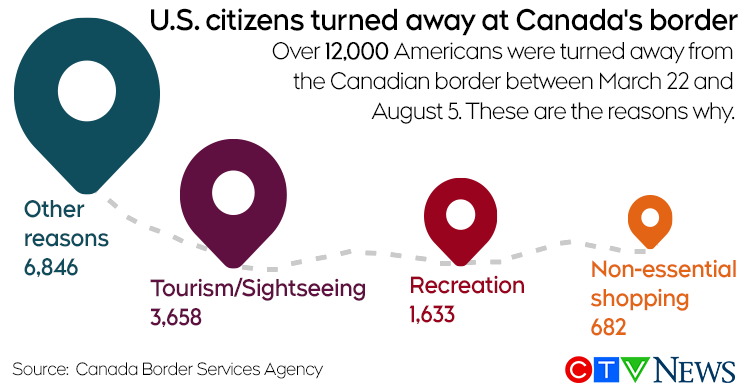 However, it isn't just Americans who seem to be misinterpreting the border rules amid the ongoing pandemic.

From March 22 to August 5, more than 100 non-U.S. foreign nationals were turned away at various ports of entry because they were hoping to do some shopping in Canada. More than 600 were turned away because their visit to Canada was for tourism, sightseeing or recreational purposes.

Just shy of 1,000 non-U.S. foreign nationals were turned away for "other," undisclosed reasons.

"All travellers who enter Canada who are not Canadian Citizens or permanent residents must meet one of the travel exemptions as set out in the Orders in Council (OIC) that the CBSA applies related to COVID-19," Mark Stuart, a spokesperson from the Canada Border Services Agency, said in an emailed statement to CTVNews.ca.

"It is also important to note that each person must meet all entry requirements before being authorized to enter Canada."

Despite the CBSA turning away the thousands of U.S. citizens and other foreign nationals who are trying to come to Canada for shopping and sightseeing, some Americans have found sneaky ways to get their desired dose of time on Canadian soil.

A Florida couple was issued provincial offence notices and each received a $1,000 fine after they entered Canada in Fort Erie to attend a seasonal property on July 3. The two did not comply with the 14-day period of self-isolation after entering the country.

Another American couple, who entered Canada on June 24 near Thunder Bay, Ont., were also fined for breaking quarantine rules. They were spotted multiple times in an Ontario town, despite being told to isolate for 14 days upon their arrival.

While there is an exemption allowing Americans to travel through Canada to reach Alaska, some U.S. citizens have been caught using this loophole to break Canadian rules. The Alberta RCMP issued six tickets to American travellers who decided to stop near Lake Louise for long hikes in the park in mid-June.

Canada has since taken action to close this loophole, including the imposition of new restrictions to limit the time Americans are allowed to take to travel through Canada and forcing them to use a "hang tag" on their rear-view mirror that easily identifies them as Americans just passing through.